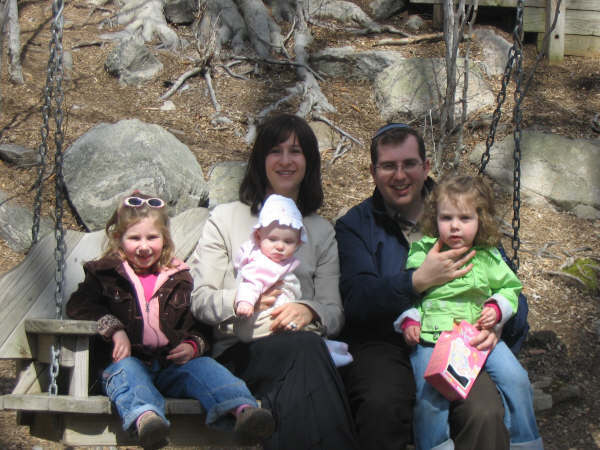 Congregation Ohav Shalom in Merrick will welcome a new rabbi in July. Rabbi Ira Ebbin will succeed Rabbi Jeremiah Wohlberg, who has led the shul since 1963, a year after its founding.

Rabbi Ebbin arrives in Merrick via Montreal, Quebec, where, for the past three years, he has been the senior rabbi at Beth Zion Congregation. He was the rav of the Young Israel of Stamford, CT, for five years before that.

“It’s exciting to go back to the comforts of what we know,” said Rabbi Ebbin, who grew up in Brooklyn. He and his wife, Chevi, a physical therapist, have a number of close relatives in the Five Towns, Bayswater and Brooklyn. They are the parents of three girls, Shlomit, 10, Shira, 7 and Anat, 4.

“At Stamford we were one congregation with about 100 members. Both the younger members and the senior members felt a sense of family. I noticed that at Ohav right away. It’s a larger synagogue, about 250 members, but they still keep the core sense of community ... where everyone watches out and takes care of each other.”

The shul in Quebec where Rabbi Ebbin currently serves is considerably larger - over 600 members, with the numbers of congregants swelling to in excess of 1300 Quebecers for the Yomim Nora’im (High Holy Days).

Although Rabbi Ebbin and his family have been happily living in Montreal for three years, he admits they still felt like foreigners.

We just celebrated the holiday of Passover, he said, “where we learn about the stranger and those who don’t fit in, and we remember the Exodus from Egypt and that the Jewish people were in a foreign land. Although we weren’t slaves [of course] we felt as though we were strangers in the land and I can definitely appreciate that more now,” Rabbi Ebbin explained.

Add in the relief of no longer having to learn French, and anticipation of more moderate New York winters, and the Ebbin family is clearly excited about the upcoming move.

“Chevi went out [to Long Island] a few weeks ago, for the day, and she found a house that she liked, and we bought it,” Rabbi Ebbin said. “I haven’t seen it yet.”

He’s not concerned however, noting, “she did this in Montreal too, by the way, and she did a very good job.”

Rabbi Ebbin received semicha from Yeshiva University’s Rabbi Isaac Elchanan Theological Seminary in 2001 and also holds a Master’s Degree in Public Administration for non-profit organizations from Baruch College in New York. During his time in Connecticut he was president of the Vaad HaKashrus of Fairfield County. He is also a member of the executive board of the Rabbinical Council of America.

When asked what excited him most about this new position, Rabbi Ebbin exclaimed, “I love shul! I am thrilled that I can continue what I love to do in the comforts of Long Island. The greatest thing about being a rabbi is that I get to be a part of people’s lives on a regular basis.”

“I am looking forward to connecting with these kids. Unfortunately, due to the poor economy families are taking their kids out of day school, but fortunately they are sending them to our Hebrew school, which gives me a chance to connect with them.”

Congregation Ohav Shalom was founded in 1962. It has been at its current location on Merrick Avenue since 1968.

Ohav Shalom already features a full schedule of classes and activities and Rabbi Ebbin hopes to bring with him the sense of energy he experienced in Montreal, by bringing in classes to reach people of all levels.

“It is my plan to continue to cultivate the open and warm feeling at Ohav Shalom, that enables everyone who walks into our building to feel welcome regardless of their background or level of observance,” he said.