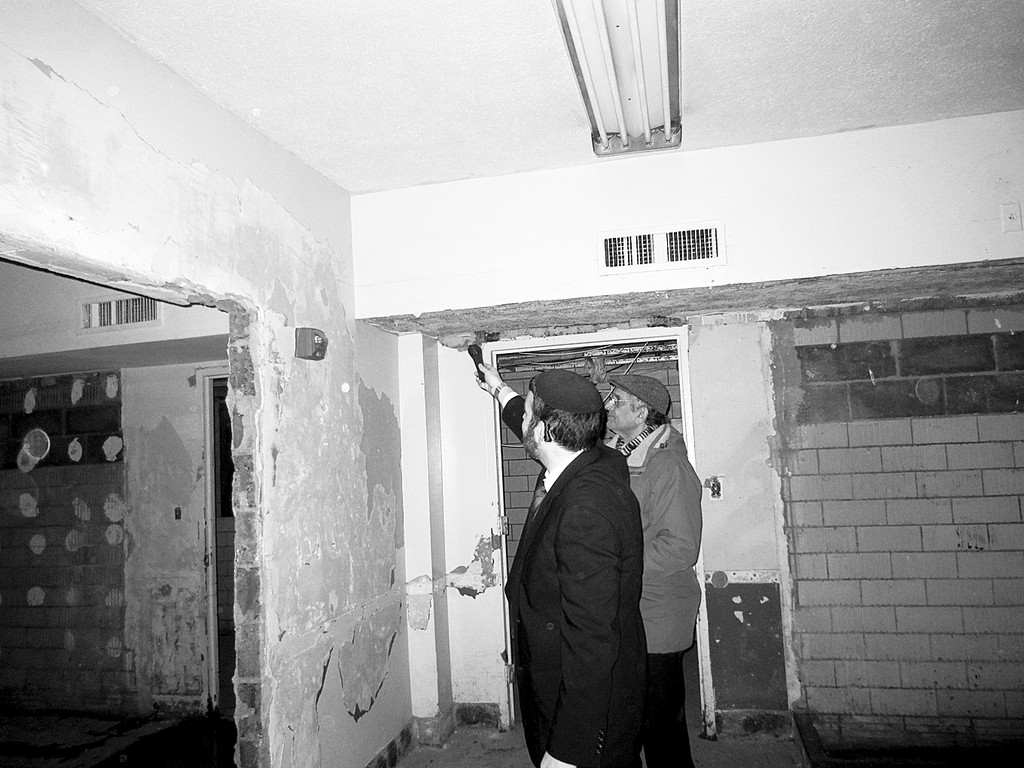 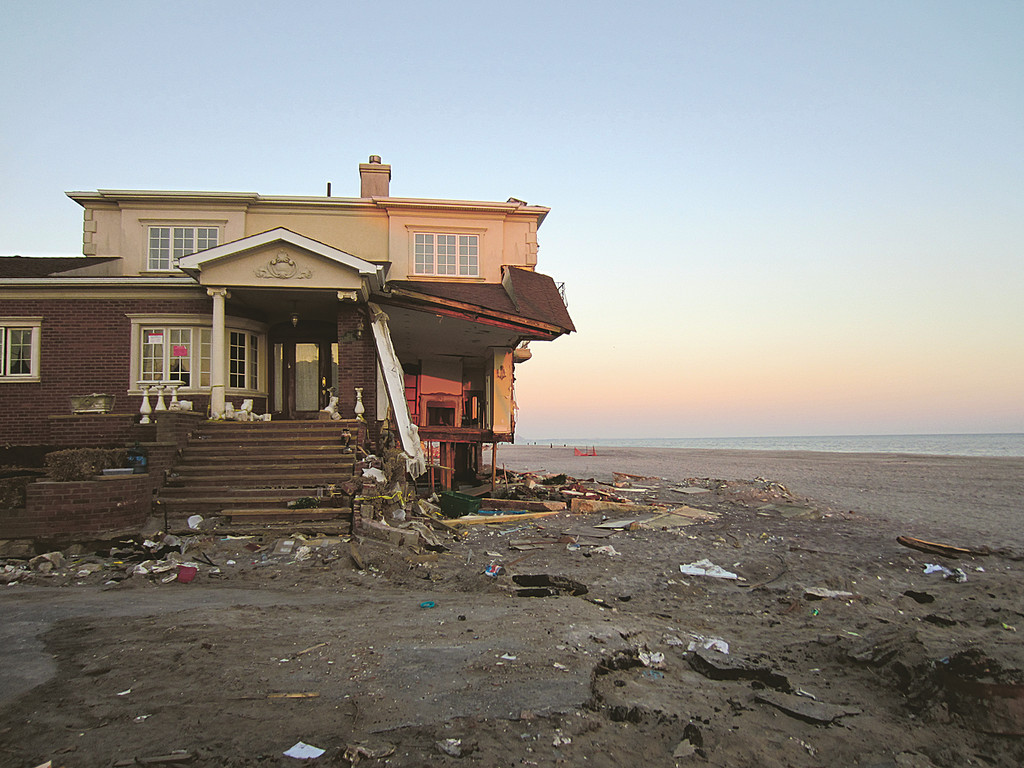 Belle Harbor was hit hard by Hurricane Sandy; the ocean thundered over the beach and through the streets, flooding homes and leaving behind destruction and devastation. One of the synagogues there is now padlocked and dark, its innards rent asunder, waiting for the funds to rebuild.

Going down into its lower levels is like entering the sunken Titanic, its structure still beautiful, the beams of flashlights cutting through the damp, dusty, silty darkness, illuminating the raw walls and floors that had once held benches, books, chairs, desks and Torahs.

Congregation Ohab Zedek is the anchor of the Jewish community, a majestic building with three sets of double wooden doors atop a bank of granite steps, a huge menorah visible through the balcony’s window above. The structure stretches along the whole block of Rockaway Beach Boulevard between Beach 134th and 135th Streets. (The congregation traces itself back, according to a historical account on its website, as the summer quarters of The First Hungarian Congregation Ohab Zedek, formed in 1873 on Avenue B and Houston Street in Manhattan.) Before Hurricane Sandy, Ohab Zedek boasted a large main sanctuary, a ballroom, and a lower level basement with a Beit Midrash, an elementary school, lunchroom/minyan room and a playground behind. The upstairs is intact; the basement floor is gutted. The school, Yeshiva of Belle Harbor, has been displaced to Brooklyn.

Now the growl and gas fumes of two large generators greet visitors to the site, powering the cell phone towers mounted on the roof of the shul. And in the lot near the playground behind the shul is the temporary home of Ohab Zedek, a large, fully outfitted trailer tied in by LIPA to the power line, providing a temporary haven to Ohab Zedek’s members, refugees from the storm.

The men gathered for mincha and maariv on a recent Sunday as the sun began to set, painting a pink-orange-red swath across the sky over the churned and battered beach. The one time multi-million dollar homes abutting the beach are split, their insides gaping open, pillars scattered like bowling pins, the beach walls snapped and scattered like discarded crackers in the carved out sand. The wind whips the cold air but inside the trailer it is warm and brightly lit. The camaraderie and the davening warmed the group, and the rabbi of the shul, Rabbi Tsvi Selengut, gave a dvar Torah between mincha and maariv.

Rabbi Tsvi Selengut is now the full time rabbi of Ohab Zedek. He has semicha from Yeshiva University and is in his second year teaching at DRS High School as the mashgiach of the Yeshivat Lev Shlomo program for the boys at Queens College who learn at DRS in the mornings. He and his wife, married one year, live on Beach 129th Street near Yeshiva Mercaz HaTorah. He is also the grandson of Chazan (cantor) Abraham David Fuchs, a”h, who had led the davening at Ohab Zedek from 1962.

The orthodox Jewish community in Belle Harbor is a tight knit group, almost shtetl-like in its unity and closeness. Even those who have lived there and moved on retain an almost umbilical connection to the narrow peninsula bounded to the north by Jamaica Bay and to the south by the Atlantic Ocean.

“Every single inch of Belle Harbor, between the beach and the bay was flooded,” noted Selengut. “Every house lost electricity and heat. The first row of houses along the beach are now destroyed. The 130th street block between Newport and Cronston burnt down with just blackened ground left. The shul had ten feet of water in it, the entire (newly refurbished) Bais Medrash was destroyed. Most of the Sifrei Torah were safe in the Rabbi’s study but two were in the basement in an Aron above ground. We never expected it to flood over three feet. The entire electricity, plumbing and heat are totally destroyed—about $1,000,000 of damage.

“No one could live here—the whole town smelled of smoke and sewage. In twenty minutes you would have a sore throat, the air quality was so bad. Some stayed, many left. In the first week about 15% were back, now more than half are back. They have a very positive spirit. The Jews here are very hartzig.

“The boardwalk and the beach wall are down so there is no eruv. The mikveh is damaged—we are raising money. The insurance is not going to pay for it.” Rabbi Selengut distributed money from the OU and UJA and they helped finance the trailer and Philip Goldfeder arranged for LIPA to hook it up to the electricity. Selengut said it is a Nadler modular home, with air conditioning, heating, electricity, bathrooms. The inside is divided by a mechitza from Ohab Zedek, white lattice wood dividers interspersed with white shower curtains strung between, chairs, tables, book cases, siddurim and chumashim that were not damaged from Ohab Zedek. He said many had to replace their Tallesim (prayer shawls) and Tefillin—they had been in the bais midrash high on the wall, but the flood waters reached the ceiling there. “No one imagined it would go so high.” The trailer also has an area for a kiddush with a warming drawer, table, hot water pots.

“We’re coming back,” declared Selengut, determinedly. He counted out the different classes, and that 80 people come to daven every Shabbat. “It’s getting cramped. We would like to get back into the upstairs of the shul, that’s the first goal and to close off the downstairs.” He said that all the infrastructure would cost $100,000. The community has always been a bastion of chesed, who would give freely to many charities, but now, he stressed, each resident “needs from $40,000 to $60,000 just to get their homes functional again with costs of $10,000 just for the boiler in a house and $10,000 to empty the sea and sewage water from the pipes.”

Congregation Bais Yehudah on Beach 137th Street became the relief center three days after the storm, recounted the rabbi there for ten years, Rabbi Levi Osdoba. The basement had flooded, destroying the water tank, boiler and electricity. A generator provided by Chasdei Lev in Brooklyn was hooked up to the shteibl to run electric heaters and lights. They were open for the community, said Osdoba, for members, nonmembers, the unaffiliated. They supplied food, clothing, cleaning supplies, and volunteers from other communities. They had mincha and maariv immediately, said Osdoba, and within three weeks, after repairs, they reinstituted Shabbat and Shacharit. Initially, some wanted to “move out and give up, they were disillusioned,” he said. But he gave them “chizuk” and spoke to them, encouraging them. “The support of the community gave them encouragement. As far as I know everybody is coming back. This is a community in desperate need.” He cited the mikve, the eruv and the Hatzolah van. “Salt water went into the engine,” he said. “We have a long way to go. It will take months, but it looks positive.”

Living in Belle Harbor, part of Queens, is like living, “out of town in town,” said Selengut, smiling. The people, he said, “feel much more positive, everyone wants to be back, they want to rebuild, they are not gloomy. They are looking forward and ahead. This is like their family-–they are happy to be back with their family. It’s not a depressed place. It’s positive. From the waters rose such tremendous chesed (kindness), ahava (love) and triumph. It’s incredible.”

Selengut said the experience gave him a deeper understanding of the concept of “yikavu hamayim” G-d’s gathering the waters together at creation. “Belle Harbor became part of the Atlantic Ocean for the night,” he explained. He sent email drashas, chizuk, during the period of displacement. He also understood Yaakov’s request for Lechem (bread) and begged (clothing) and only that—“an appreciation of the basics.” He smiled. “It will be good.”