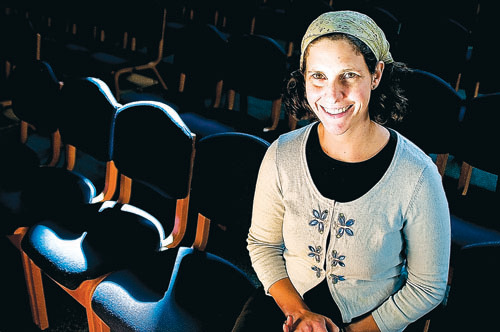 Scholars-in-residence come and go in the Five Towns — a nearly weekly visitation to one shul or another that usually passes without comment. But one invitation several weeks ago sparked an unusual, if short-lived, effort to rally the local rabbinate in condemnation, and a rabbi’s blistering essay in a local publication.

The public announcement was low-key: “Young Israel of Hewlett will host Ms. Sara Hurwitz,” read the notice from the shul that appeared in community newspapers, including this one. But it referred to Rabba Sara Hurwitz, whose controversial title is to remain unique to her under the terms of an agreement between the Rabbinical Council of America and her mentor, Rabbi Avi Weiss. In May, Rabbi Weiss backed away from his plan to ordain Orthodox women. He did so under threat of expulsion from the RCA, condemnation from virtually the entire Orthodox world, including Agudath Israel of America’s Moetzes Gedolei HaTorah, and, reportedly, internal pressure from male students within his own yeshiva.

An attendee at Hurwitz’s three lectures over the weekend of Parshat Korach said that Rabbi Heshy Blumstein introduced her with praise for her knowledge but pointedly omitted the title Rabba, citing the widespread objections sparked by its conferral. Citing a death in his shul, Rabbi Blumstein declined to speak to The Jewish Star.

A June 23 e-mail obtained by The Jewish Star, signed by Rabbi Zvi Flaum, chairman of the Vaad Harabanim of the Five Towns and Far Rockaway, urged local rabbis to attend a meeting that night “at Cong. Shaaray Tefila with the president of the Young Israel of Hewlett (Rabbi Blumstein’s shul). We will be discussing recent events that happened in that shul and I urge your participation so that he should see the broad based united voice in regard to the recent bizayon HaTorah,” literally ‘humiliation of the Torah.’

The meeting never took place and Rabbi Flaum, formerly of the White Shul, declined to comment.

But the most prominent criticism came in a newspaper article by Rabbi Aryeh Zev Ginzberg of the Chofetz Chaim Torah Center in Cedarhurst.

Writing in the Five Towns Jewish Times, he claimed to “have been asked by one of the senior gedolei ha’dor (great Torah leaders of the generation), as well as by several of my distinguished colleagues to bring to the attention of the general community the great bizayon HaTorah, the degradation of the Gedolei Torah (Torah greats), that took place in our community this past Shabbos.” He did not name the other rabbonim although he promised that they would be identified upon request. A request by the Jewish Star for the names was unsuccessful.

Hurwitz “may be proficient in the entire Shach and Taz (which I have no way of knowing, yet I am highly doubtful),” Ginzberg wrote, referring to the works of two primary halachic commentators on the Shulchan Aruch. Her and Rabbi Weiss’s actions, “sent a loud and clear message to all who heard them: the unified words of our Gedolei Torah and distinguished rabbonim mean absolutely nothing,” he said.

“The concept of Da’as Torah, emunas Chachamim (trust in scholars), and kavod (honor) for talmidei chachamim are all ancient ideas that are to be tossed to the side, along with our ancient mesorah (tradition), all for the sake of feminism and perceived equality,” the article continued.

Because of the event, “this coming Tisha B’Av, we will have something else to cry about,” Rabbi Ginzberg concluded.

Rabbi Ginzberg did not respond to requests for comment.

A commenter on that newspaper’s website claimed to be a member of Rabbi Ginzberg’s shul and said that he and other members were unhappy about the article:

“[We] do not understand why you are making a Machlokis (sic) with another shul that is having an event in their own shul,” the post read. “We should be dealing with the problems that exist in our own shul. The disagreements between members, the talking that goes on in the back, and the real problems that some of our members are having with parnassah or marital problems. Instead of dealing with these important issues, you are starting a fight with another shul for no reason. Focus on the problems at home before you fix other people’s problems.”

Rabbi Herschel Billet of the Young Israel of Woodmere “strongly objected to the ad hominem, embarrassing and dismissing comments about Sara Hurwitz’s knowledge,” he said in condemning the article.

“The author asserts that the programming of Young Israel of Hewlett is something else to mourn about on Tisha B’Av,” Rabbi Billet said.

“I would think that Jews beating other Jews in Israel and the world making a blood libel about Israel is something serious to mourn about on Tisha B’Av — not the programming of the Young Israel of Hewlett.”

The Young Israel of Hewlett “is an Orthodox synagogue with an Orthodox rabbi,” Rabbi Billet added. “He is the mora d’asra and he has the right to determine halachic decisions about programming, and he should not be subject to my or other rabbis’ scrutiny for the decisions he makes for the shul.”

Rabbi Kenneth Hain of Congregation Beth Sholom in Lawrence explained that he felt it is “important to allow some diversity of opinion inside Orthodoxy, whether we agree or not with that opinion.”

“Diversity in Orthodoxy has a strong tradition and there have been long-held differences in opinion about issues in terms of women’s role and relations between Orthodoxy and other movements vis-à-vis Religious Zionism and the role of religion in the Jewish State,” Rabbi Hain explained. “Now as we enter into an era [when] women’s Torah education has increased exponentially on the highest level, the Jewish community is confronting how to respond.”

“I’m sure in this case that the rabbi deliberated and even consulted with his authority and his teachers and arrived at a decision and I have to respect that,” Rabbi Hain said. “I think a part of the legitimacy of a rabbinic position is to make decisions for his congregation together with his leadership. I think that’s fundamental.”

Hurwitz, who appeared this week at number 36 on Newsweek’s unscientific yearly ranking of the top 50 rabbis in America, was sanguine about the Ginzberg article.

“It’s not new to me. I don’t have much to say, I feel like people have to work it out for themselves,” Hurwitz told The Jewish Star by phone. “I’m committed to serving Klal Yisroel and the Jewish people and teaching Torah and that’s what I’m going to continue doing, with G-d’s help.”

Hurwitz has had speaking engagements cancelled in other communities, she said, and expressed gratitude for the opportunity to speak in the Five Towns.

“I’m thrilled that the Young Israel of Hewlett invited me,” she said, “and really honored to have been welcomed to the community.