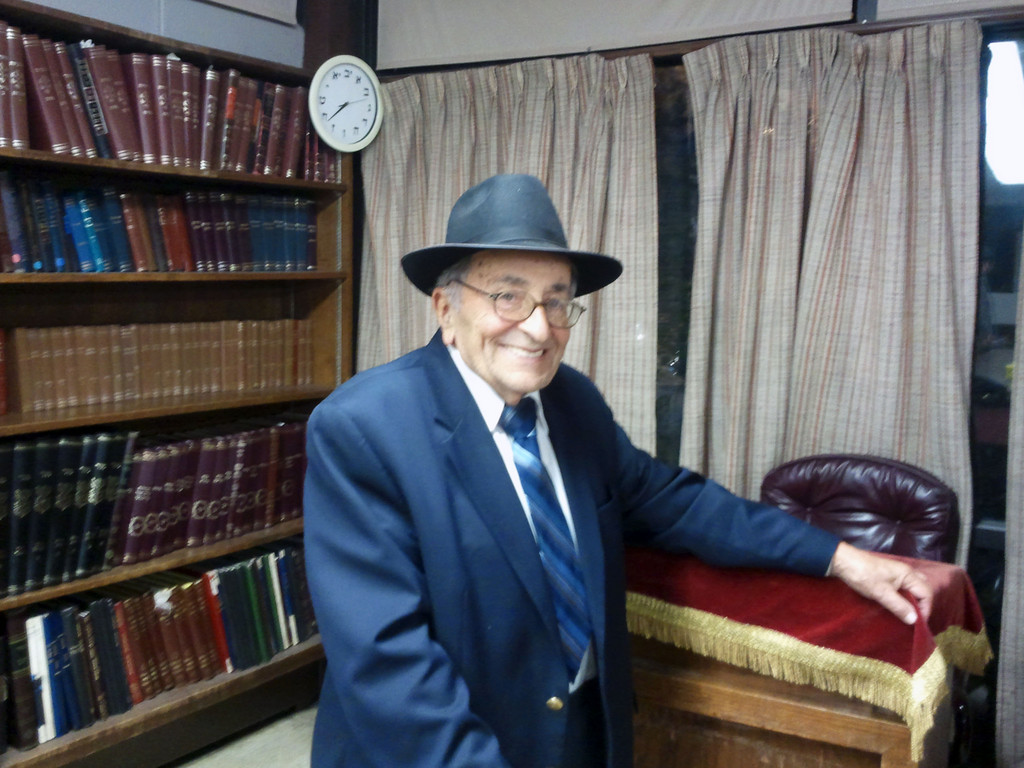 When Rabbi Raphael (Ralph) Pelcovitz moved into Far Rockaway in 1951, the Congregation Kneseth Israel (the White Shul) that he attends was a white structure, a single day school served the community, and the Long Island Railroad rattled above endless rows of summer bungalows. Much has changed since then. This Shabbat, the congregation honors Rabbi Pelcovitz, its Rabbi Emeritus, for his 60 years of service to the community.

“My father arrived when I was born, he took an active role in HILI, which became HAFTR,” said his son, renowned psychologist Dr. David Pelcovitz, describing his alma mater, the Hebrew Academy of Long Island. “He worked closely with rabbis at the time in holding yeshivas to a higher standard.”

Born in Canton, Ohio, Rabbi Pelcovitz initially studied in local public schools, before continuing at the Hevron Yeshiva in Jerusalem. In choosing Far Rockaway as his home, Rabbi Pelcovitz spoke of his two sons, seeking to enroll them in a yeshiva rather than a public school. Speaking on the values of yesteryear’s public schools, he recalled, “Back then society was more attuned to the basic beliefs of bein adam l’chaveiro, authority of parents and derech eretz,” Rabbi Pelcovitz said. “Jews and non-Jews alike followed an accepted moral authority.”

Taking an active role in his new home, he took up the pulpit at the White Shul while teaching at Torah Vodaath and writing books on the Sforno’s commentaries.

While Rabbi Pelcovitz is a son of a rabbi, he encouraged his sons to seek their own professions, arguing that a semikha should be a full-time vocation rather than a title. “There is never the expectation that the son will be everything that the father is; our emphasis is on transmission of values, not vocations,” Rabbi Pelcovitz said in an interview with Mishpacha magazine.

David went on to become the chair of psychology and education at Yeshiva University’s Azrieli Graduate School of Education, while Nachum practices podiatry in Lawrence. “My brother and I treat the opposite ends of the body,” David Pelcovitz quipped. But he credits his father’s values in his psychology practice, “Psychology is like secular clergy. I am in the family business of helping people. That’s what attracted me to this profession”

Dr. Pelcovitz personifies the connection between psychology and clergy in his classrooms, where he teaches pastoral counseling to YU’s semikha candidates.

Together with his father, Dr. Pelcovitz coauthored Balanced Parenting, published by Artscroll/Mesorah, on achieving the Talmudic balance between the “left hand pushing away while the right hand draws closer.”

Rabbi Eytan Feiner shares the pulpit seat with Rabbi Pelcovitz, who continues to keep an active presence around the community. Rabbi Feiner described his senior colleague as a “brilliant role model, the quintessential Rav who personifies Torah, chesed, and avodas Hashem in everything that he does.”

As his birthday approaches, Dr. Pelcovitz related the Pirkei Avot description of a nonagenarian as “bein tishen lashuach,” or stooped over. “But you can also read it as lasuach, which means to talk and put into perspective.”

For those attending the White Shul on this special Shabbat, Rabbi Pelcovitz will provide the perspective after mussaf services. The community’s tribute includes cantors Joel Kaplan and Avi Katz, and an afternoon shiur by Rabbi Hershel Schachter, the rosh yeshiva of the seminary at YU.

YI of Hewlett: Shabbat across America

It started with screaming