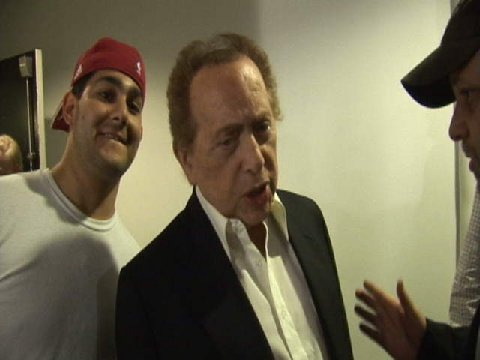 Horrified by a spate of recent deaths among local teens due to substance abuse, John and Luisa Dutra – owners of the first Kosher Dunkin’ Donuts in Lawrence and Valley Stream – sponsored Jackie Mason’s comedy show on Thursday in Manhattan, to increase awareness of the issue and raise funds for Our Place, an organization dedicated to helping Jewish youth at-risk.

Several teens from Our Place attended the event and were treated to a backstage meeting with Mason, who gave them words of encouragement, in addition to recording a short video message for the organization.

“Jackie and the teens have a certain connection,” observed Rabbi Avi Schwartz, a filmmaker who arranged the event and is now making a movie about substance abuse within the Orthodox community. “He can give them advice that nobody else can.”

Our Place, founded in 1998, functions as a safe haven for Jewish youth struggling with various issues, ranging from substance abuse to domestic difficulties and expulsion from school, by offering them therapy sessions, counseling and a physical place for them to relax and work through their problems.

Though its headquarters are in Brooklyn, “at least half of the kids who come are from the Five Towns,” said Menachem Poznanski, LMSW, who works as a therapist there.

Poznanski, a resident of Cedarhurst, is the director of The Living Room, a division of Our Place, which specifically targets young adults who were previously in drug rehab and are now in recovery, working to transition into mainstream society.

“It’s a co-ed program which functions almost as a Hillel house for the population we work with,” Poznanski explained. “A lot of it is kiruv [outreach], with a mental health aspect as well. We help them with the process of slowly transitioning back into the community.”

Over the past decade, Our Place has helped more than 800 kids deal with a wide range of problems.

“We create a healthy street environment for kids,” said Sony Perlman, LMSW, the clinical director of Our Place. “We are doing very special work that needs to be done. We don’t believe that any kid is allowed to not be taken care of –– we have the ‘save a soul, save the world’ mentality.”

In addition to The Living Room, Our Place has two other facilities in Brooklyn — one for girls and one for boys.

“These are places where the kids feel at home,” said Perlman. “We keep it not feeling clinical. The centers have pool tables, ping pong, therapy rooms and sound proof rooms. We offer almost every service – group therapy, GED classes, career counseling, job placement, food every single night, shabbatonim and trips.”

One local initiative, launched in October, was the Kol Yehuda Morning Kollel, a Torah learning program for post-high school males, which is a joint venture between Our Place and Madraigos, a Five Towns organization that offers services and activities for children at-risk. Through recreational activities, counseling and working with families and schools, Madraigos - based at Pearsall Avenue in Cedarhurst – enables these teens to reenter the Orthodox community with confidence.

Run by Poznanski and Madraigos Director Rabbi Dov Silver, the Kollel meets every morning in Cedarhurst, Monday through Thursday, from 9:15 a.m. to 12:30 p.m., attracting an average of 15 students per day.

“We set up chavrusas for them, they learn in chaburahs, and guests come to give shiur,” explained Poznanski. “In the summer, we get a pretty strong showing.”

The Kollel caters specifically to young men who have background in 12-step recovery programs and many of the shiurim that are given address the experience of a recovering Jewish person within the framework of a Torah-based life.

Both Madaigos and Our Place receive donations from private individual sponsors in the community, however, Our Place, which also relies on government funding, has been struggling since a massive funding cut this year.

“Doing major outreach fundraising is a blessing, a silver lining, since I always wanted to expand,” Perlman said.

He hopes to be able to expand Our Place and to establish new facilities in other locations, among them the Five Towns. Alternatively, Our Place wants to partner with existing centers, such as Madraigos and the TOVA mentoring program, where Perlman, a native of Far Rockaway, used to work.

“We have spoken to some local organizations, but haven’t made any concrete plans yet,” Perlman disclosed. “But, there is always strength when people team up together."

“We are doing these fundraisers [like the comedy show] to expand our horizons," he added. "We have a great system here but we are always making changes because kids are always changing.”