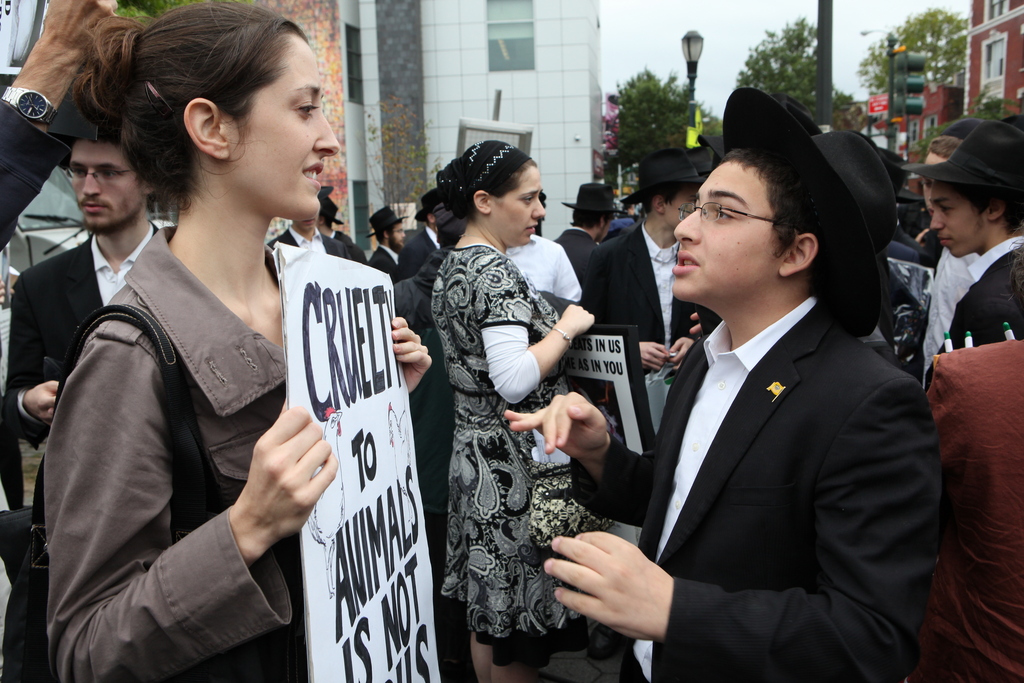 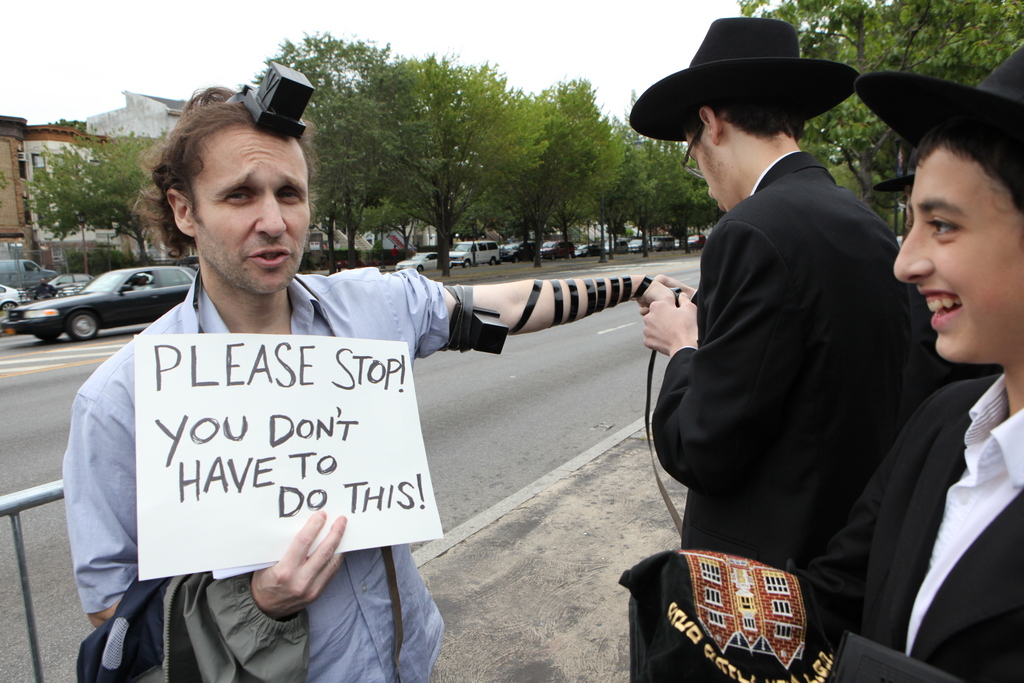 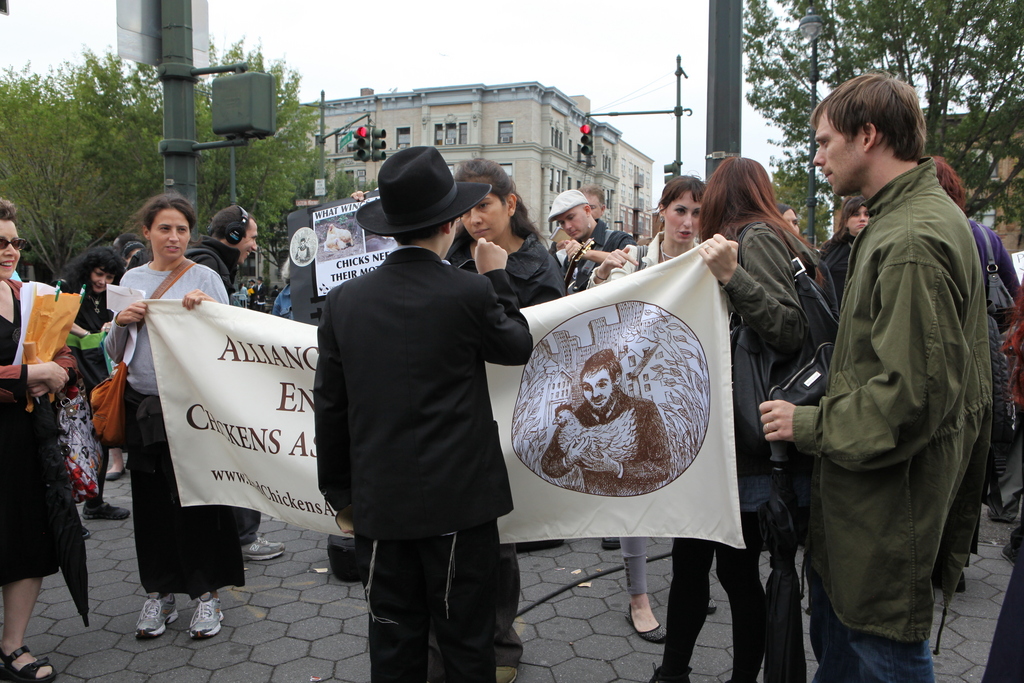 To get away from kaporos.

This time of year, many observant Jews perform the atonement ritual known as shlugging kaporos, swinging a chicken around one’s head three times. As they do so they recite, “This is my exchange, this is my substitute, this is my atonement. This chicken will go to its death while I will enter and proceed to a good long life and peace.” Traditionally, the chicken is then slaughtered and given to the poor. A very common alternate version of the ceremony substitutes money for the chicken with the money going to charity.

The chicken ritual has come under scrutiny and been criticized in recent years, by both animal-rights activists and Jews concerned about the kashrus quality of the slaughter and processing of the chickens, and this year is no different. An organization has even been formed that is devoted to ending the practice of using chickens for kaporos. The New York-based Alliance to End Chicken as Kaporos is a spin-off of United Poultry Concern, a non-profit that describes itself as dedicated to, “promote compassionate and respectful treatment of domestic fowl.”

“We’re not against atonement,” explained Karen Davis, the president of United Poultry Concern. “We’re against an atonement ceremony that has animal abuse.”

The group held a rally outside the Jewish Children’s Museum in Crown Heights, Brooklyn on Sept. 12. Three-dozen or so protestors including some religious Jews carried signs describing kaporos as inhumane. “Being cruel to animals is not pious,” read one sign. The protestors verbally sparred with teens and adults from the Lubavitch community. The rally was intended to take place while kaporos was underway but the organizers miscalculated.

“It was important for us to be there [anyway] since it was the period of the high holidays and some of the practitioners have a time for reflection without the birds being slaughtered,” Davis said.

Chaotic scenes captured on video were posted on the website Crownheights.info. A woman with red hair is seen yelling at Lubavitch men for “killing her loved ones.” In another segment, a young Lubavitch teenager defends the use of chickens for kaporos.

“G-d built the world,” the unidentified teen explained to a protester. “He made me and you and he made the chicken. G-d said the purpose of the chicken is you should slaughter it, make a blessing on it, and elevate it.”

Rina Daych, who lives in Borough Park and participated in the protest, called the treatment of the birds before and during the ritual “horrific.” On the night of the protest, the chickens were left out in the rain without food and water, she said.

“Even the way the animals are handled violated tza’ar ba’alei chaim,” she asserted, referring to the Torah’s prohibition against cruelty to animals.

The debate over Kaporos goes way back in Jewish history. No record of the practice exists in the Torah or the Gemorah, though it is variously dated to having begun around the ninth century. According to the author of the Shulchan Aruch, Rabbi Yosef Karo, known as the Mechaber, the practice is entirely adopted from pagan sources and should not be practiced. Rabbi Moshe Isserlis, the Ramo, a commentator on the Shulchan Aruch, holds the opposite opinion. Kabbalists such as the Ari, Rabbi Isaac Luria, supported it as well.

This past week, Rabbi Shlomo Aviner, head of Jerusalem’s Yeshivat Ateret Cohanim and the rabbi of Beit El, spoke out against the practice of using live chickens for kaporos.

“Because this is not a binding obligation but a custom, in light of problems related to kashrut and the suffering of animals, and given the edicts of the aforementioned rabbis, a recommendation must be made to favor performing kaporos through money, by performing the great mitzvah of providing for the needy,” Rabbi Aviner said, according to JTA.

The popularity of the ritual in America can largely be traced to the work of one man and his family: Rabbi Shea Hecht. Rabbi Hecht’s father began trucking in chickens to Crown Heights in 1974 and the family has been continuing the practice since.

“There are 50,000 chickens in the New York area,” explained Rabbi Shea Hecht. “Rabbi Yaakov Yehuda Hecht, who is in Gan Eden (heaven), can take credit for 85 percent.”

Each participant pays to perform the ritual and the money raised, Rabbi Hecht says, goes to the organization he heads, The National Committee for the Furtherance of Jewish Education. Kaporos is the group’s second largest annual fundraiser and helps schools, camps and projects such as delivering food packages to the needy.

Rabbi Hecht defended the treatment of chickens and criticized the goals of organizations like the Alliance and People for the Ethical Treatment of Animals, which staged a protest against kaporos two years ago.

“If I was G-d or king of the world I’d take children away from parents who don’t know how to treat their children,” Rabbi Hecht asked rhetorically. “Would PETA shlep their kids away? By and large, the people who work for us we show how to hold a chicken in a way that it’s not painful. [Besides] a shechting is going to take place anyway!”

“We’re pushing for the end to the use of chickens,” Davis explained. “Because it’s cruel and it’s not necessary to use chicken.”

This focus has hurt the organization’s attempt to stop kaporos, according to Shmarya Rosenberg of the Failed Messiah website, a former Lubavitcher and frequent critic of Orthodoxy.

“The problem with kapparot… is not that chickens are slaughtered,” Rosenberg wrote. “The problem with kapparot is that chickens are cruelly handled. They are transported crushed in cramped cages that do not allow them to move or open their wings. They often are not given food or water, and can go hungry and thirsty for days. They are left in those cramped cages, sometimes in the open sun, until slaughter. After slaughter the chickens are often poorly stored at temperatures that are too high to be safe, as their blood, feathers and waste litter the streets. And then, while some birds are cleaned and processed, many others are simply discarded… because the cost of cleaning and processing the birds is too high to make it worthwhile.”

Rosenberg continued: “But to argue that the slaughter itself is problematic — not because the chickens are being tortured to death, but simply because they are being killed — defeats the entire purpose of the protest.”

Rabbi Hecht, a prominent member of the Lubavitch community, professes to not be bothered at all by the protests. When PETA attempted to stop his organization’s kaporos programs by bombarding his office’s fax machines, a number of the faxes were anti-Semitic in nature, he recalled.

“Don’t tell me you’re so worried about the chicken,” Rabbi Hecht explained. “The gedolim say that people who want to be kinder than Hashem end up being cruel to human beings.”

These days, Rabbi Hecht says, he has a bigger problem than activists: competition.

“A lot of places cut us out,” Rabbi Hecht explained. “We used to do it in Flatbush. We don’t do it in Far Rockaway anymore. It’s private business now… Hey it’s capitalism, G-d bless this country.”