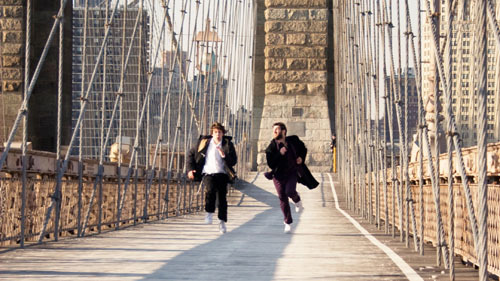 Holy Rollers, the story of a young chassidishe man lured into a drug smuggling ring after a broken shidduch, is based on a number of true stories that took place in the late ‘90s. For the 18 days it took to film, Jesse Eisenberg glued on thick brown payis and wore a rekel (black coat) and the critically acclaimed actor said he found the experience liberating.

“As an actor, having certain boundaries — certain things that were off-limits in what I would touch and [ways] I would act — [when] you have those boundaries you have more freedom,” Eisenberg, 26, told The Jewish Star. “In a kind of almost paradoxical way, it was a freeing experience.”

Eisenberg is Jewish but not observant and prepared for his role as Sam Gold, the drug smuggler, by spending several days in Crown Heights, Borough Park and Williamsburg. When he visited 770 Eastern Parkway no one recognized him, he said, freeing him to play the role of ... himself.

“Frankly [I was] never asked why I was there. I think they assumed I was a secular Jew wanting to know about Judaism and I was,” he explained. What he learned surprised him.

“I imagined them to be a monolithic group that prayed 24-hours-a-day and had no interest in sociability,” Eisenberg said. “In retrospect it seems obvious that communities made up of different individuals have different beliefs. The experience showed me that in a closed community or a more isolated community there are individuals who are very similar to me.”

The film, written by Danny Abekaser, a Sephardic Jew, was released several weeks ago to mixed reviews, though most critics praised the movie’s accuracy at portraying the characters’ faith. The filmmakers took pains to not offend community sensibilities and shot the majority of the scenes in Ozone Park, Queens, as a stand-in for Borough Park.

“The characters are fully realized,” Eisenberg explained. “In a lot of other movies the characters are seen as very stereotypical and used for comedy in a way that undermines their humanity.”

After shooting Holy Rollers, Eisenberg began work on a horror-comedy called Zombieland that had both critical and commercial success when it was released last year (the production of Holy Rollers was held up for financing reason). “[There’s] actually more concern about adhering to accuracy with zombie movies because fans of zombies have a sense of what zombies are — how they run, how they act — fans were almost more insistent about accuracy than about actual communities,” like the Chassidic one, said Eisenberg.

As for any lasting developments in his own relationship with Judaism, Eisenberg says any gains were temporary. “I think during the movie, I kind of made little commitments to become closer to it,” he explained. “The day we finished filming I had to fly to Georgia to film Zombieland. Everything is so fast-paced. You learn something new and then you think you’re going to pursue it [but you don’t]... It’s the transient nature of movies.”

Ironically, Eisenberg’s co-star, the rapper known as Q-tip, who plays a drug dealer in the film, found himself keeping the Sabbath. “I’m going to enjoy Sabbath on Saturday, so on Friday at sunset I’m going to turn off my TV, my radio - I’m not going to do anything,” Q-Tip told the NY Daily News. “And then when the sun sets on Saturday night, I’m going to raise hell!”

That drew a positive reaction from Rabbi Avi Shafran, the director of public affairs at Agudath Israel of America, who confessed to being unfamiliar with the rapper. “I had never heard of Q-Tip (the person, that is; the object is familiar to me),” Rabbi Shafran wrote in his weekly Am Echad email newsletter. However, he said, there was something to be learned from Q-tip’s new observance and that we could all be “swabbed with a bit of Q-Tip.”

“When the Sabbath ebbs away... Are we saddened a bit by the imminent loss of its holiness...”? Rabbi Shafran continued, “or are we itching, well, to barge as quickly as possible back into the “real” world, to listen to the news, check our e-mail, get in our cars - surrender without a fight to the mundane?”

As for Eisenberg, lasting religious developments aside, the glue-on payis from the film are somewhere in his closet.
“If the movie is a hit I’ll sell [them] on eBay,” he said with a laugh.

Confessions of a Jewish hacker