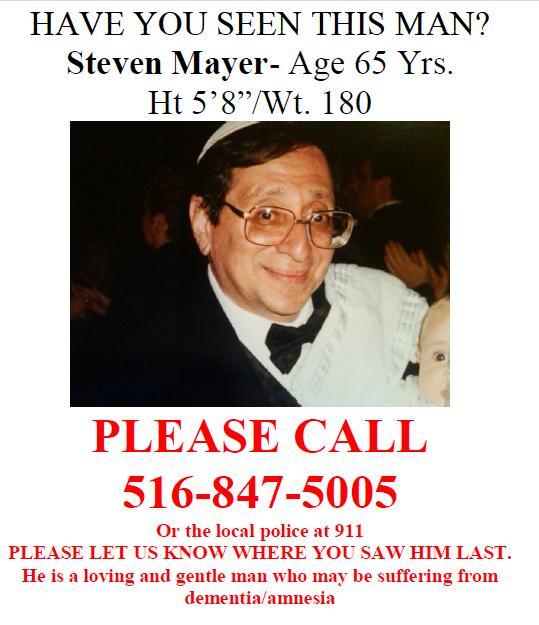 Online: October 16, 2010
The Jewish Star has learned that the body of Steven Mayer, the Great Neck man missing since Oct. 4, was found in Riverhead.

According to Rabbi Dale Polakoff, rabbi of the Great Neck Synagogue, Mayer's body was discovered in a heavily wooded area in Riverhead over Shabbos. Mayer's last phone calls had been traced to the area when he disappeared.  Thousands of volunteers scoured Long Island over the last two weeks but were unable to find  any trace of Mayer or the Nissan Sentra he had been driving.

He was described as a “fixture” in the Great Neck Jewish community by Rabbi Polakoff .

Mayer, 65, had been on his way to work when was last heard from. A neurologist the family spoke with believed that Mayer may have suffered a partial stroke that morning. The last phone calls Mayer placed had been to his deceased parents.

Stuart Mayer, Mayer's son, described him as being the happiest when he was with his wife, Susan, his four children and 10 grandchildren.