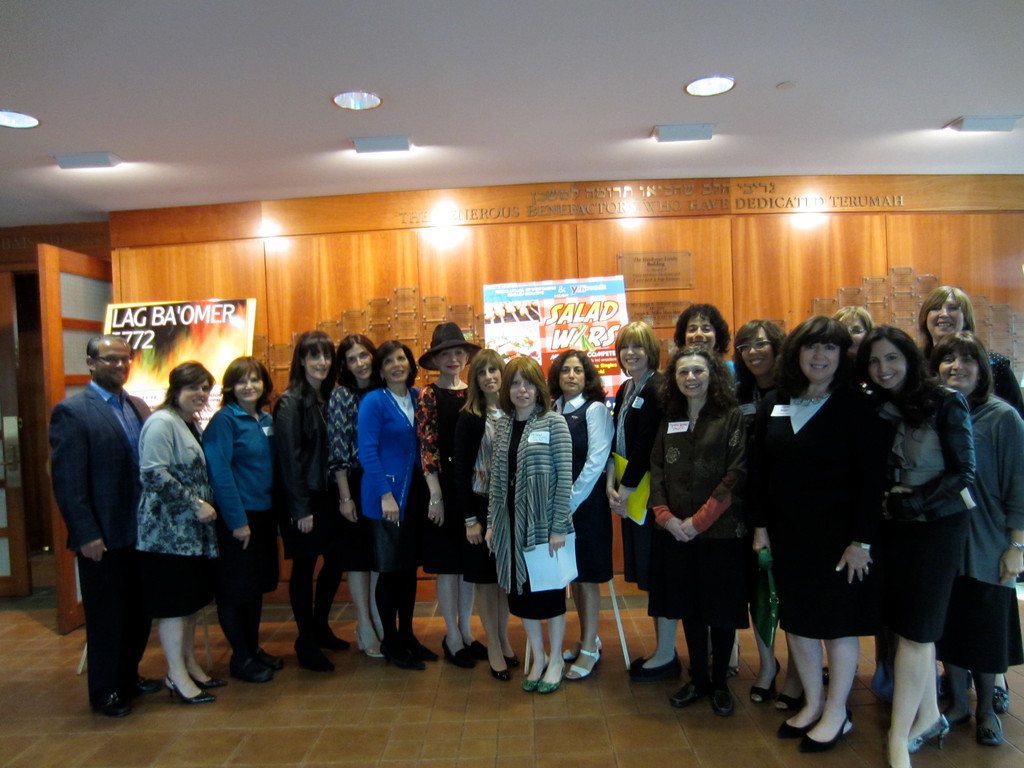 YIW Singles intitiative committee chaired by Mark Bernstein joins forces with YUConnects Special Events Coordinator Rebbetzin Margie Glatt and facilitators prior to the successful event held at Young Israel of Woodmere on May 6, 2012.
Photo by Malka Eisenberg
By Malka Eisenberg

Another successful volley in the matchmaking world was lobbed this past Sunday at the Young Israel of Woodmere, bringing 100 singles together for an evening of meeting and interacting in a chic food competition.

In a highly coordinated and planned and elegantly accomplished gathering, the Young Israel of Woodmere (YIW) Singles Initiative and YUConnects held Salad Wars and BBQ: Meet, Eat and Compete, for modern Orthodox singles between the ages of 25 and 33.

The program included a buffet with sushi, and a competition modeled on popular Food Network shows with small groups of men and women working together to create salads and side dishes, trivia quizzes, raffles, prizes and food demonstrations. The evening was capped with a barbecue and ice sculpture.

“I went to a number of events,” one of the male participants said to one of the coordinators. “I was blown away by the level of detail that went into it. It is by far the best event that I have ever been to.”

“Thank all of you for putting together last night’s event and dedicating so much of your time to us,” emailed another male attendee. “It was surely a lot of work to organize and it showed. Know that that sentiment was echoed by others with whom I spoke. So if you ever doubt yourselves whether it’s all worth the effort, I’m telling you that it is!”

“Before I left,” noted Margie Glatt, Special Projects Coordinator at YUConnects and an organizer of the event, “people were asking about contact information. I know of five dates being set up within the first 24 hours.”

YUConnects has facilitated more than 90 engagements since it started in 2008, stressed Glatt. It is a program of the Center of the Jewish Future of Yeshiva University, founded by Rabbi Kenneth Brander. When it started it was “open only to YU students but is now open to everyone,” explained Glatt. “A lot of girls want a YU type boy.” She noted that the Jewish Matchmaking Alliance held an inaugural conference at YU on April 25 bringing together 12 Jewish matchmaking organizations in a joint effort to share information, improve training and develop projects to aid singles in their quest for matches.

“We’re trying to provide interactive opportunities for all,” said Dr. Efrat Sobolofsky, Director of YUConnects. “YUConnects is unique. It is an educational resource with dating forums, academic forums run by Yeshiva University and has a unique relationship with Roshei Yeshiva and advisors including Rabbi Mordechai Willig, Rabbi Hershel Schachter, Dr. David Pelcovitz, and Charlie Harary.”

Glatt noted that its small staff of 80 volunteer connectors are “careful and discreet” and develop a good relationship with members. The searches are “powered by SawYouAtSinai and only the connectors search for them and make appropriate” recommendations. They “make it comfortable for the men and women.” YUConnects runs at least 12 singles events each year.

Glatt commented that they were contacted by a Jewish community in a Latin American country. They heard about the YIW initiative and want to do something for the singles in their area, she said.

The YIW singles initiative, “It Takes A Shul,” began planning in the fall and the four rebbetzins there addressed an audience of over 200 people to urge attendees to “make the phone call, make suggestions for each other, help unmarried men and women find potential matches,” continued Glatt. Committees were formed and they got to work. They launched a series of activities, compiled a data base, and sent out a census to the 1000 member families to know how many singles are in the shul. In January, another meeting of 80 people came together, divided into five groups and presented singles for matchmaking. Organizers and members of the YIW came together many nights for networking and brainstorming, they said, culminating in the Salad Wars event. This “paired YUConnects with a very motivated active singles committee with Mark Bernstein as Chairman,” noted Glatt. The tables were age-based and the men and women were divided in advance into groups that coordinators thought would be good matches. There was an “overwhelming response,” said Glatt.

Glatt pointed out that it was well publicized and they partnered with National Council of Young Israel and SawYouAtSinai and had to turn away 40 people because of space limitations. It was “upscale, trendy, professionally catered and decorated. It was a classy event. Thousands of dollars were raised in sponsorship, the YIW sponsored it, and a lot of effort, time, and money went into it. People can come and have a good time and go home with recipes, a basil plant.” She noted that there were connectors or facilitators at each table and throughout the room.

“YUConnects emphasizes that singles are productive and valuable members of the community.” She stressed the need for “natural meeting venues.”

The facilitators were coached before the event on sensitivity, privacy concerns and how to make the attendees comfortable and feel welcome. As the men and women entered singly or in small groups, name tagged greeters guided them through the registration process and into an initial room with a buffet and small tables where they could stand, talk and be introduced. Some were at first shy, hesitant, and awkward, but, by the next part of the program, the initial tension dissolved under the guidance of the facilitators. The well dressed singles wearing gloves and aprons moved easily around the room on their salad wars tasks, interacting comfortably with each other. A genial buzz of relaxed conversation filled the room, decorated with yellow, orange, and green balloons and centerpieces of glass vases filled with colorful vegetables.

Enid Goldstein, an organizer, concurred. “Everybody gave their time, their neshoma, they met at night whether they were old enough to be in the shidduch parsha or not. We want to see people building a bait ne’eman and hopefully we will be successful.”