Rabbi Chaim Wakslak takes a moment to remember the three Israeli students who were kidnapped and murdered.
The Jewish Star photos Rebecca Rogak 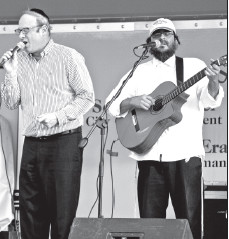 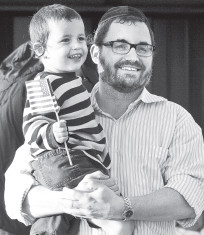 More than 500 people gathered along the new Long Beach boardwalk and the sandy beach below on Sunday for the summer season’s first concert.
The group Simply Tsfat was the first to play in the new bandstand, performing nigunim, Carlebach standards and Breslov tunes, a fusion of folk, pop, Irish-sounding Jewish music, some with words from prayers or Tanach.
Rabbi Chaim Wakslak, rav of the Young Israel of Long Beach, dedicated the concert in memory of the three boys found murdered in Israel a few days before, Gilad Shaar, z”l, Naftali Fraenkel, z”l, and Eyal Yifrach, z”l. “We came together achieving a rare Jewish unity; we choose life as our enemies choose death,” he said, and quoting Rachelli Fraenkel, Naftali’s mother, that we will have to learn to sing without them though we will always hear their voice inside.
The band stopped the music to call out, “Shalom Aleichem Long Beach! Congratulations on recovering from Sandy!” noting that last year they performed without a bandstand and without a boardwalk.
Rabbi Wakslak noted the “standard practice” of shifting from mourning to joy. “You can push us down but we get up,” he said. “The Jewish people are likened to the moon, that waxes and wanes. We spring back and show resolve with simcha.”
Before the concert, Young Israel of Long Beach held their 4th annual barbecue dinner for Chai Lifeline children and their families. About one hundred attended from all over.
Rabbi Wakslak said “the community is working diligently to put Long Beach on the map. It’s unfortunate that Long Beach is not identified as a destination to live” for frum families. He pointed out that the community has an eruv, a mikveh, and a kosher butcher, bagel store and Dunkin Donuts franchise.
He said the community is offering a $30,000 grant for people to buy a house, a stipend for those who rent an apartment, and they are working on a tuition credit with the Hebrew Academy of Long Beach. He noted that about 300 families reside in the area with an additional summer influx of 100 more.
Shoshana Wagman, a Stern College sophomore from Hewlett, sat on a blanket on the sand with her family. She came to enjoy Jewish music. “I love the beach,” she said. “It’s a perfect place.”
Sally Wiener of Long Beach sang quietly along with the music, clapping and bouncing in her seat on the boardwalk. “I loved the music. It’s incredible. I know every song.” Eli Dworetsky of North Woodmere heralded the concert as an achdus (unity) event.
Violinist Yonason Lifshutz warned listeners not to be “spiritually asleep” and played a lullaby with the two guitarists, Eliyahu Reiter and Yonatan Zarum, as the sun set. They launched into a foot stamping, hand clapping rendition of Yachad followed by “Next Year in Jerusalem.”