Blinded Before I Saw My Way to the Temple Mount 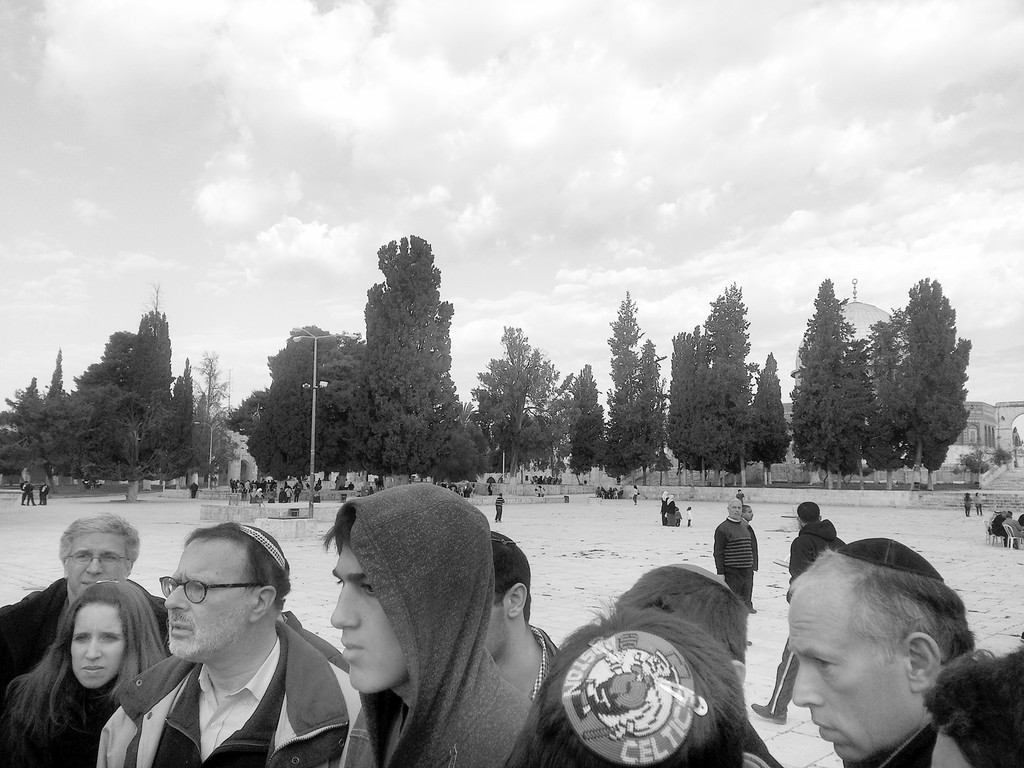 Rabbi Adler with some of his congregants at the vast courtyard and plaza on the Temple Mount. 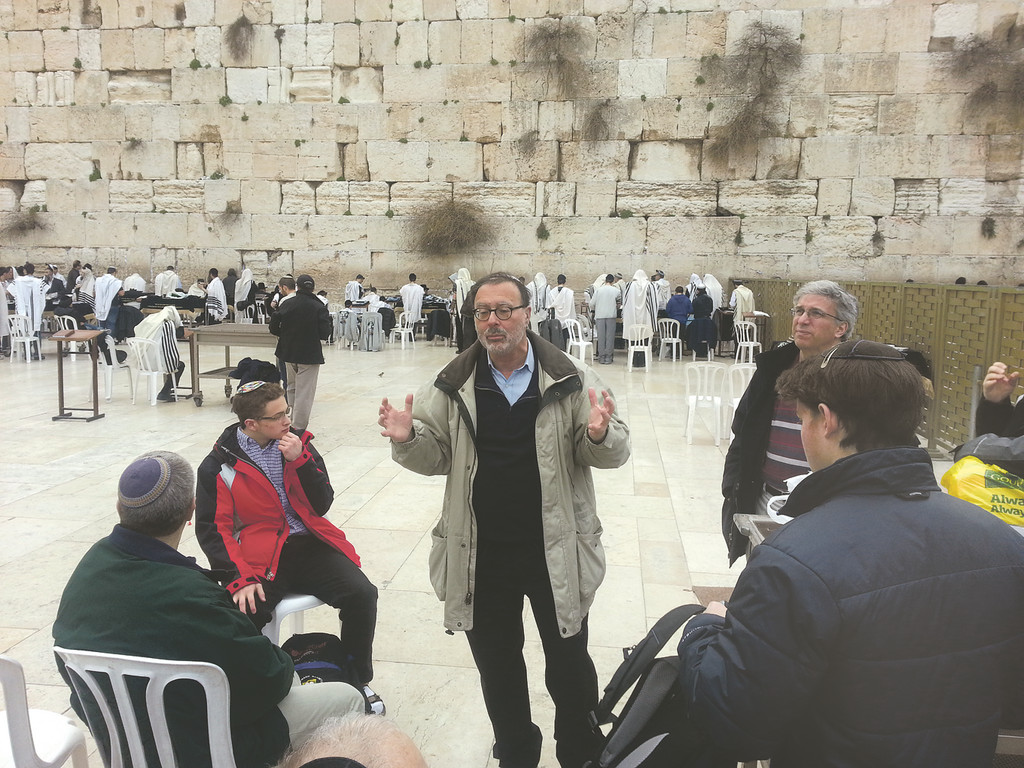 Rabbi Yosef Adler of Teaneck and some of his congregants at the Kotel. 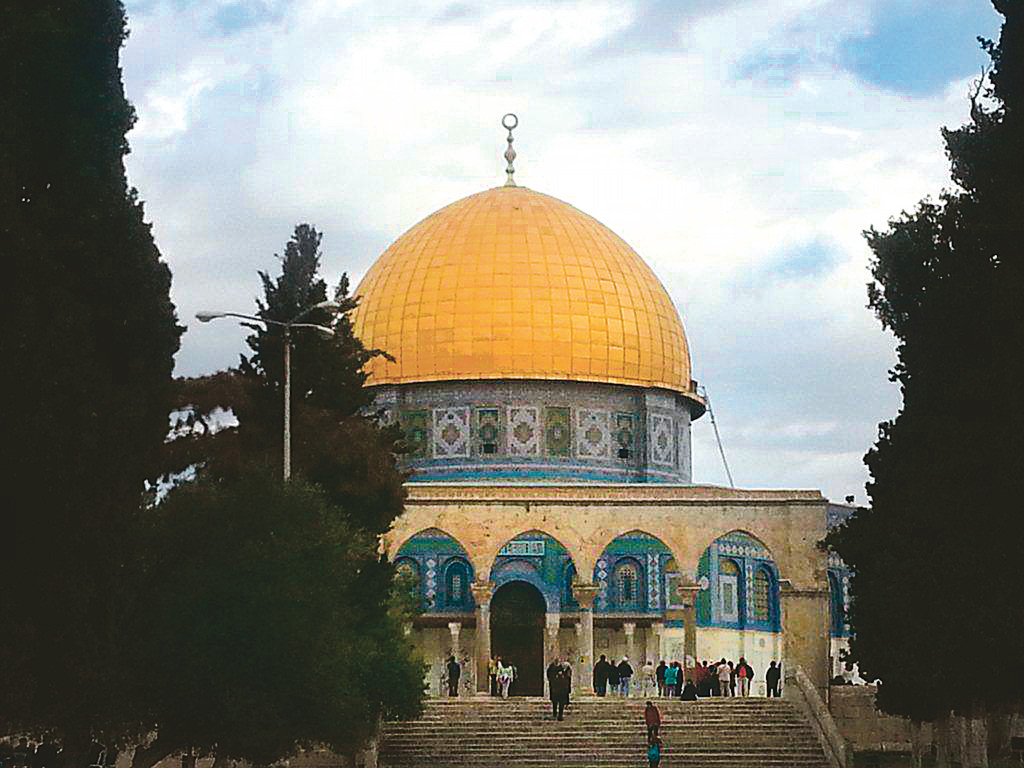 The very first time I traveled to Israel, everything I did was brand new and exciting. Since then, it’s been exciting, but very few surprises would appear. The City of David was something I could add to my list of fascinating experiences more recently.

What I had this past visit were some encounters I could not imagine seeing, experiencing, and, in fact, in one case, maybe never seeing again. The first was when I took my son, nieces and nephews to Holon to “see” the so-called blind museum, better known as Dialogue in the Dark. It is a museum that is set up as a city street, a food market, a cafeteria, a boat and a home, but is completely dark. It is so dark that prior to the tour the tour guide requires that your cameras, phones, watches that may glow in the dark, all be left in a locker. You walk though these spaces experiencing life as if you are blind.

Our tour guide herself is blind, and she was the only one who was not anxious, and she did not fall. The rest of us were cast into a world of blackness to experience what it is like to live as a blind person and learn some of the ways that Israel has made it such that life for people who are vision impaired can function as well as anyone.

It was humbling to say the least, and something that I never saw before. Pardon the pun.

That experience was followed by something even more humbling for anyone who appreciates the weight of Biblical history and the politics of one of Moshe Dayan’s most controversial actions following Israel’s victory at the Six Day War. Within hours of hoisting the Israeli flag over the Temple Mount in 1967, Moshe Dayan ordered it taken down and handed the keys to the whole area above the Western Wall to the Muslim waqf in the hope of keeping the peace.

Since then, Haram al-Sharif, as it is known, has been largely inaccessible to Jews and Israelis for fear that they may actually murmur a prayer, prostrate themselves to the awesomeness of the place where the Temple once stood, or even sway as Jews often do in prayer. For uttering a prayer, or just looking like you are, to the G-d who spoke to Moses at Sinai, is sacrilege to the Muslims and they may riot and start a deadly melee as a result.

To sanctify this first time ever visit, my group, consisting of my rabbi from Teaneck, Rabbi Yosef Adler and a crew from his synagogue and school, went to a ritual bathhouse in the Old City and we immersed (separately, of course) to purify our bodies, but more our souls, prior to walking the hallowed ground. My 14-year-old son’s very first experience at a mikvah, he’d soon like to forget it.

After morning prayer at the Western Wall, where my two nephews served our minyan (prayer group) as the Kohanin (priests), since in Israel the custom is that the Kohanim deliver blessings each day, we set out to the wooden bridge that climbs to the top of the Wall and onto the Temple Mount and the vast courtyard and plaza that contains both the Al-Aqsa Mosque and the Masjid Qubbat As-Sakhrah (Dome of the Rock) where the Even HaShetiya, or the “Foundation Stone” rests. As we are taught, this very stone was the first point of Creation, for it says in Talmud Moed, “from it the world was founded” (Tractate Yoma 54a).

We had to stand in line and go through security. We took out our cameras, keys and phones and had to leave our bags behind; then I discovered once up there that there are several other entry points for Muslims and non Jews and Israelis to enter through the shuk and residential areas of the Old City, and these individuals can apparently bring picnic baskets, trash and whatever else they so please. Seemingly, the Jewish presence is the danger up there.

We walked around the plaza, every few feet stopping to admire the view and to hear our tour guide explain every detail of the site now and throughout history. What was remarkable to me was the Waqf security, essentially the Islamic police force charged with keeping Jews from desecrating the Prophet Muhammad with the mere thought of a Biblical passage or praise to the L-rd who one would think they, too, believe is responsible for the very land we and the Muslims were walking on.

The security became noticeably agitated at one of our group who was little more than restless and was swaying back and forth. The Israeli police escort we had asked him to stop moving or risk being ejected. We are asked to respect their holy site, the site they will allegedly draw blood to defend in G-d’s honor, but Arab families and visitors can dump empty soda bottles, potato chip bags and household trash throughout the area; that is acceptable.

The garbage and treatment aside, the ability to go up to that Temple Mount is a privilege. I was a little taken aback at how few Israelis and Jews actually go there. The place was filled with tourists from Japan to Sweden, who all were permitted to enter the Dome of the Rock platform and building. We were not. I asked one of the Waqf security guards holding his handheld radio tight and guarded if I could sit for a moment, as I was a little fatigued walking the grounds. He said it was not allowed as men and women of other religious persuasions were seated on the park benches. I did not argue.

There is somewhat of a religious debate whether Jews may step onto the Temple Mount for fear of entering the realm of The Holy of Holies (Kodesh Hakodashim), on which the inner sanctuary of the Tabernacle and later the Temple in Jerusalem where the Ark of the Covenant stood during the First Temple. We went because Rabbi Adler believes that we could walk the outskirts as we had, but not enter the area of the Dome of the Rock, and that by not taking advantage of the site, Jews and Israel yield their access and right to what is our holiest site.

With that, our tour guide had suggested that if more Jewish people would visit, Israel would be forced to reconsider its tangential relationship to the site and work out a more amicable agreement that would allow freer access and even prayer.

It seems fitting that I was covered in darkness at the museum for the blind prior to stepping onto the Temple Mount. Just as Moshe Dayan blindly handed the area over with no stipulation for reciprocity that would afford painless visitation rights, I was blind too, until I saw just how intense and powerful that place truly is.