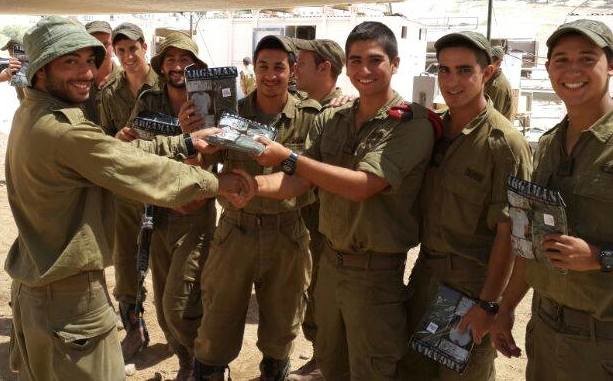 Israeli soldiers holding up packages of undershirts they received from A Package From Home.
By Malka Eisenberg

A leisurely summertime stroll on the Atlantic Beach boardwalk is being used to raise funds to support Israeli soldiers.

On Thursday, July 31, more than 100 men, women and children will lace up their sneakers for the second annual walkathon for A Package From Home (APFH), an organization that collects, packs and distributes care packages for Israeli soldiers.

APFH gathers travel size toiletries — including toothpaste and stick deodorant, undershirts, socks, underwear and candy (they note that many soldiers like M&Ms). Four handwritten notes — often written as part of chesed projects — are included in Hebrew, English, Russian and Amharic. They are packed in Rabbi Berel Wein’s shul in Jerusalem and the army sends trucks to collect them and distributes them within two days to soldiers on duty in the field. Business travelers and tour groups often bring a duffel bag with the necessities to Israel; an APFH representative picks up the bag from the airport.

This project, launched at the start of the second intifada in 2000, has delivered more than 250,000 packages to date. The walkathon’s chief organizer, Helen Fuchs of Woodsburgh, got involved during a trip to Israel eight years ago.

The walkathon, at the Sunny Atlantic Beach Club, is taking place on a Thursday when the club is relatively quiet. Registration will be inside the country club building, parking is free and bathroom facilities are available. Fuchs recommends registering in advance but participants can also register on the morning of the walkathon before 9:30 am.

The walk along the Atlantic Beach boardwalk, a distance Fuchs estimates at “about 3K,” starts promptly at 10 am lasts about 45 minutes, followed by a mini brunch with coffee, juice and light food, she said. A donation box for needed and recommended items will be set up.

Last year, two former chayalim bodedim (Lone Soldiers) spoke about what it is like to be a lone soldier. Fuchs said the soldiers recounted how receiving the packages from “perfect strangers” gave them chizuk (moral support).

Shira Gilor, APFH’s project manager in Israel, told The Jewish Star that in recent weeks, they have been sending boxes of socks, underwear and T-shirts “every other day” to the soldiers “who haven’t been able to get back to their base so they can change into clean clothes.” She said that since the beginning of the expanded conflict in Israel, “more than 2,000 soldiers have been provided with clean clothing and more than 800 have received full packages.”

Asked what people in our area can do to help, Gilor noted, “We need funding to cover all the requests for packages that we are getting daily. Tell your friends and family. Write letters of support and encouragement for us to add to the packages.”

Letters are important, she said because, “besides the physical needs, we like to also take care of the spiritual needs and the letters help raise the morale of the soldiers, knowing that people around the world are thinking of them and willing to take the time to sit and write them a letter.”

“The soldiers thank us all the time,” said Gilor, “and I wish there was a way to deliver their gratitude and thanks to all the people who are supporting our work and helping us help the soldiers. It makes a big difference to them.”