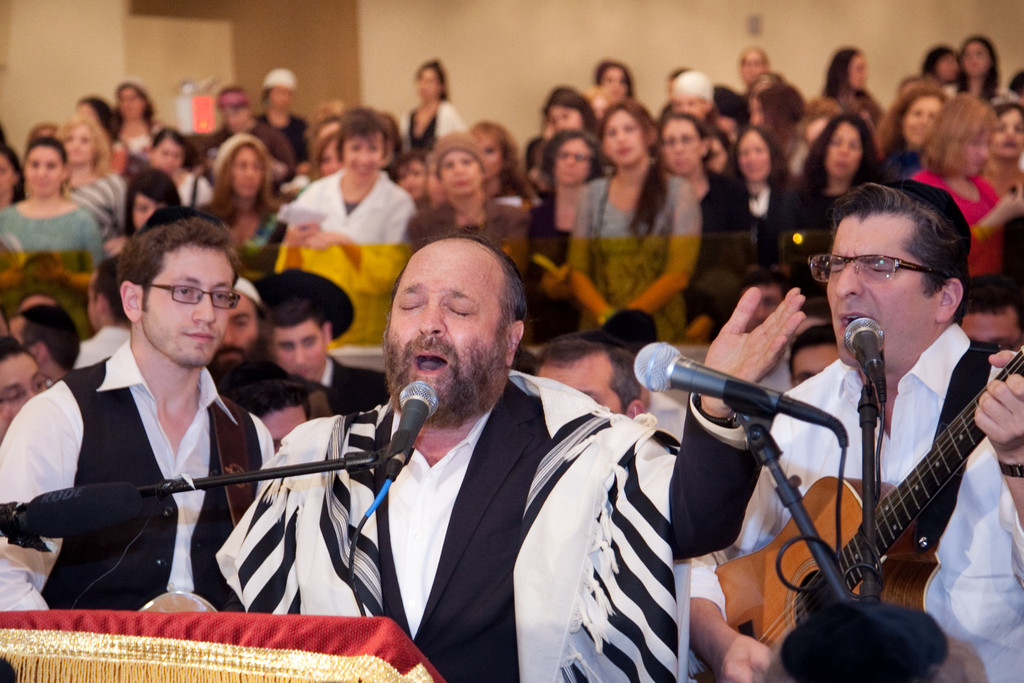 Yehuda Green (center) leading this year’s Carlebach shul‘s slichot with an overflow crowd, held at the West Side Institutional Synagogue.
By Malka Eisenberg

Singer Yehuda Green sits on a stool in a Judaica shop in Cedarhurst. He leans on the counter, his graying curly hair combed back under his kipa, his beard, his essence, channeling Rav Shlomo Carlebach, z”l, his mentor, his rebbe, his inspiration.

The Carlebach inspired singer will be singing his own music and revivals of Carlebach songs at the Young Israel of Woodmere this Shabbat, beginning with kabbalat Shabbat and culminating in a post Lag Ba’Omer concert motzai Shabbat.

Yehuda Green was born into a mixed Breslov and Lubavitch Chassidic family near Meah Shearim, Jerusalem 53 years ago. When he was five, his brother brought home a record, “Shlomo Carlebach, Live at the Village Gate.” “I was very excited,” recalled Green. “He looks like a chazzan, has a guitar in his hand, whistling—a piece of chazanus and he’s whistling! And counting!”

Green was a student in the Lubavitcher yeshiva and pointed out that they only sang Lubavitcher niggunim (tunes) there. He said that he had the “nerve” to bring Carlebach tunes in; he was the “singer in the class. They loved it.”

In 1969, Green met Carlebach for the first time. “He sang Mekimi with his guitar. I looked at him like he’s my big hero. A dream come true.”

Carlebach would come to Israel for a month or two, recounted Green, and he would go to Har Tzion, the kever (grave) of King David, and would have a musical melave malka motzai Shabbat. “It was a lot of inspiration to me,” said Green. When he was bar mitzvah, Green would follow Carlebach to the Kotel. “It was geshmak (tasty). I was a yeshiva boy, they were all hippies (his followers), I connected from the side, watching him davening. It was so beautiful. I was afraid to get close to him. In a school near Shivtay Yisrael they would sing Shalom Aleichem and finally make Kiddush at midnight. I would run away from home on Friday nights when he would come. I waited for months for that. It was the biggest excitement.”

Some time passed and Green went to “find himself,” living in Australia in the “desert with cows and horses my friends, but my biggest friend was Reb Shlomo cassettes, so much time I would lay down on the grass and listen, listen, listen.” On Yom Haatzmaut in Brisbane, Green went on the stage and sang Am Yisrael Chai, “I was nervous. It was a gathering with the Israeli ambassador with the community and there was nobody to give them the good stuff.”

In 1980, he joined a kumzits in London and sat next to Carlebach, harmonizing. “I was thinking he’ll listen to me, what is he gonna say about my singing?” At 2 A.M., Reb Shlomo said, “you harmonize so beautifully,” Green recalled. Carlebach asked Green to accompany him at a concert the following night. When he saw the stage, Green said, “I’ll go on stage but behind the curtain.” And he did. When Carlebach returned to Israel, they would sing together occasionally.

After Carlebach’s death, Rebbitzen Hadassah Carlebach, Reb Shlomo’s twin bother Eli Chaim’s wife, heard Green sing vzachor at the Carlebach shul. He was invited to sing there for Rosh Hashana. “I was leading the davening, an unbelievable dream come true, standing in his shul, what could be better than that?” He did Yomim Noraim davening in California after that but returned in 1998 to the Carelbach shul and continues there till now.

In 1991, he attempted to produce a CD and asked Carlebach to preview the music as some of it was his. Carlebach wanted it tweaked, but before any changes could be made, the material was destroyed in a fire. Years later, Green released his first CD, Land of Your Soul, Nishmat kol Chai. That year, said Green, slichot was packed. Two years ago he held the slichot at the West Side Institutional Synagogue to fit up to 1000 people. It was packed; he was told that they couldn’t let everyone in.

He released two other CDs, Yearning and Peace in My Heart. Green explained that the first CD has the Carlebach Kiddush that he ”didn’t really have,” but it is his singing. The second CD has Carlebach’s havdalah, and the third has birkas hachodesh, noted Green; six of the tunes are Carlebach and six are Green’s. “The best nigunim come on Shabbos,” he posits. ”You need siyata dishmaya (help from Heaven) to remember it.” He said that once in Williamsburg, the audience at a concert demanded that he make a song up on the spot—that was hashivainu.

He talks of opening a “big” Carlebach shul in Yerushalayim, in the Old City, that it was “Reb Shlomo’s dream.” He recalled singing mimkomcha in a shul in L.A. three years after Carlebach’s death and people came over to him after the davening and asked ‘where is that song from?’ “How come they didn’t know—this is Reb Shlomo Carlebach’s mimkomcha!” he said, in pain.

“My wish and eveybody’s,” he summed up, “is that Reb Shlomo’s music will go on and on and on like a candle that doesn’t go out. I feel I have a mission. I have so much work ahead of me to go everywhere and every corner of the world. Music speaks to every living soul. At slichos there’s a mixture of all people, coming together. This is Rev Shlomo’s music that speaks to everybody.”