Of all places! Kyrie spews his venom in Brooklyn, America’s Jewish capital

With celebs on-board, Jew-hatred is fast becoming the 'new normal' 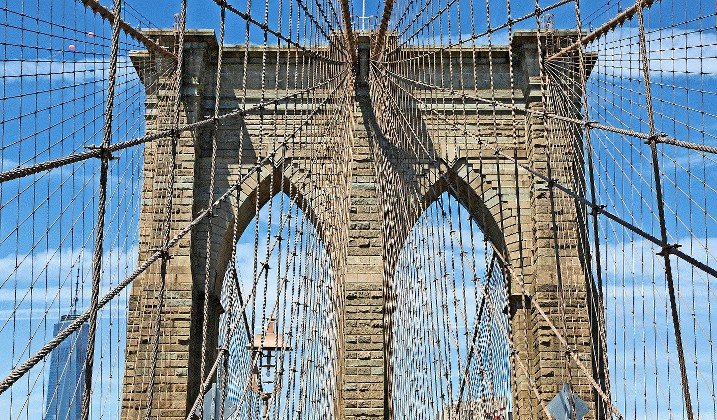 Brooklyn is more than just a place, it’s a valentine to Jewish life in America. Now its Jewish people have received an indecent drubbing from a foul-mouthed, double-dribbling idiot.”
By Thane Rosenbaum

Of all the wasted breaths these past few weeks devoted to Kyrie Irving’s tirade against the Jewish people, the one item that has not been mentioned, but that may be the most important indictment against this morally obtuse and ignorant point guard, is that such vile Jew-hatred cannot, must not, be allowed in Brooklyn.

Of all the cities in America, and all their sports franchises, Brooklyn is the most identifiably Jewish, with the richest Jewish history, where Judaism itself is most devoutly practiced. The Fairfax District of Los Angeles, the suburb of Skokie in Chicago, the cities of Miami Beach and Boca Raton, the Shaker Heights community of Cleveland, the town of Merion outside of Philadelphia, the Brookline neighborhood of Boston — all are notable places of Jewish distinctiveness and vibrancy, but they are not comparable in conjuring the Jewish imagination.

Had Irving behaved this way when he played for the Boston Celtics and Cleveland Cavaliers, the insult to Jews, while still abhorrent, would not have seemed so egregious.

Brooklyn is, and has always been, the hub of Jewish life in America. That’s why Irving’s open hostility to Jews is especially galling, so unconscionably disrespectful to his own local fanbase. No apology should be accepted, not that one seems to be forthcoming.

One in four residents of Brooklyn are Jewish. New York City is home to the most Jews in the United States, but Brooklyn easily surpasses the other boroughs in Jewish population density. There are 600,000 Jews living in Brooklyn. (In the 1940s, there were an astounding 900,000.) Brooklyn serves as the worldwide headquarters of the Hasidic movement — with the Chabad-Lubavitch, Satmar and Bobover dynasties spread across Williamsburg, Crown Heights and Boro Park.

Given that Jews first settled Brooklyn in the mid-17th century (a Sephardic Brazilian can lay claim to being the first Brooklyn Jew), even Tel Aviv has not had a more sustained cultural influence.

Chaim Potok’s “The Chosen” is set in Brooklyn — reversing the Covenant and redrawing the map of the Promised Land, locating it on Lee Avenue.

William Styron made great use of post-Holocaust Brooklyn in “Sophie’s Choice.”

It was over the Williamsburg Bridge, built in 1903, that the immigrant Jews of the Lower East Side escaped from their teeming tenements over into Brooklyn. Meanwhile, there is no bridge in Israel, Europe or the United States that is as evocative of crisscrossing Jews as the stone towers and spider-like cables of the Brooklyn Bridge.

Brooklyn is more than just a place — it’s a valentine to Jewish life in America. And now the people most associated with the borough have received an indecent drubbing from a foul-mouthed, double-dribbling idiot.

At a time when derogatory nicknames and mascots, misappropriated from Native Americans, are being abolished by college and professional sports teams, and with cultural sensitivity the new ethic, Irving took this moment to spew ancient blood libels against the Jewish people. And while he was at it, deny the Holocaust.

The repulsive documentary that he endorsed through social media only intensified the fraying bonds between the two largest communities in Brooklyn, and former national allies — blacks and Jews. This at a time when so many young black Americans have heard similar slurs and stereotypes about Jews from black athletes, rappers and clergy.

This is the example Irving has set — damning one quarter of the local population, displaying his flashy moves in distributing poison all over the court.

It’s worth remembering that Brooklyn was the birthplace of one of America’s greatest athletes, who just happened to be Jewish — Sandy Koufax, arguably Major League Baseball’s most dominant all-time pitcher. Koufax reached stardom with his hometown Brooklyn Dodgers before the team decamped for Los Angeles in 1957, taking their ace with them.

There was no finer symbol of Brooklyn’s athletic excellence than Koufax, who not only was the best player of his era, but also known for his sportsmanship, self-discipline, integrity and community involvement.

Do any of those qualities describe Irving, arguably Brooklyn’s best athlete now?

It should also not be forgotten that, in signing Jackie Robinson, the Brooklyn Dodgers became the first Major League team to integrate the sport with a black baseball player. During Robinson’s playing days, he was beloved by Brooklyn’s Jewish community, who at the time comprised half the population. Jews were integral in helping Robinson cope with the pressures of breaking the color barrier.

In return, after Robinson’s retirement, he repeatedly condemned anti-Semitism within the Black community — most memorably in an incident involving the Apollo Theater in Harlem and its Jewish owner.

Given the widespread admiration for Robinson, and his friendship with and gratitude he exhibited toward Jews, how can Brooklyn accept Irving’s coarseness knowing that Robinson would have publicly rejected him?

This is, after all, not Irving’s first foul off-the-court. Self-sabotage is apparently a prominent feature of his skill set. He fancies himself as a contrarian who can dish both basketballs and “truth” equally well.

But anti-vax and anti-Semitism are two entirely different things, posing dissimilar risks to the public. The coronavirus can be quarantined. Anti-Semitism, by contrast, is a global contagion that has proven itself, time and again, impervious to cure.

If Irving wished to tempt fate and expose himself to COVID, that’s his right so long as he didn’t endanger others. His most recent actions, however, have most certainly caused irreparable harm.

The defamation of Jews is Brooklyn’s business. And for that, he doesn’t deserve to don the Nets jersey. Having so maliciously stained the streets of this Jewish stronghold, his comeuppance should be banishment from Brooklyn. Permanent exile from the Barclay Center. Bounced forever from the borough.