Will US Jews finally stand up for themselves? 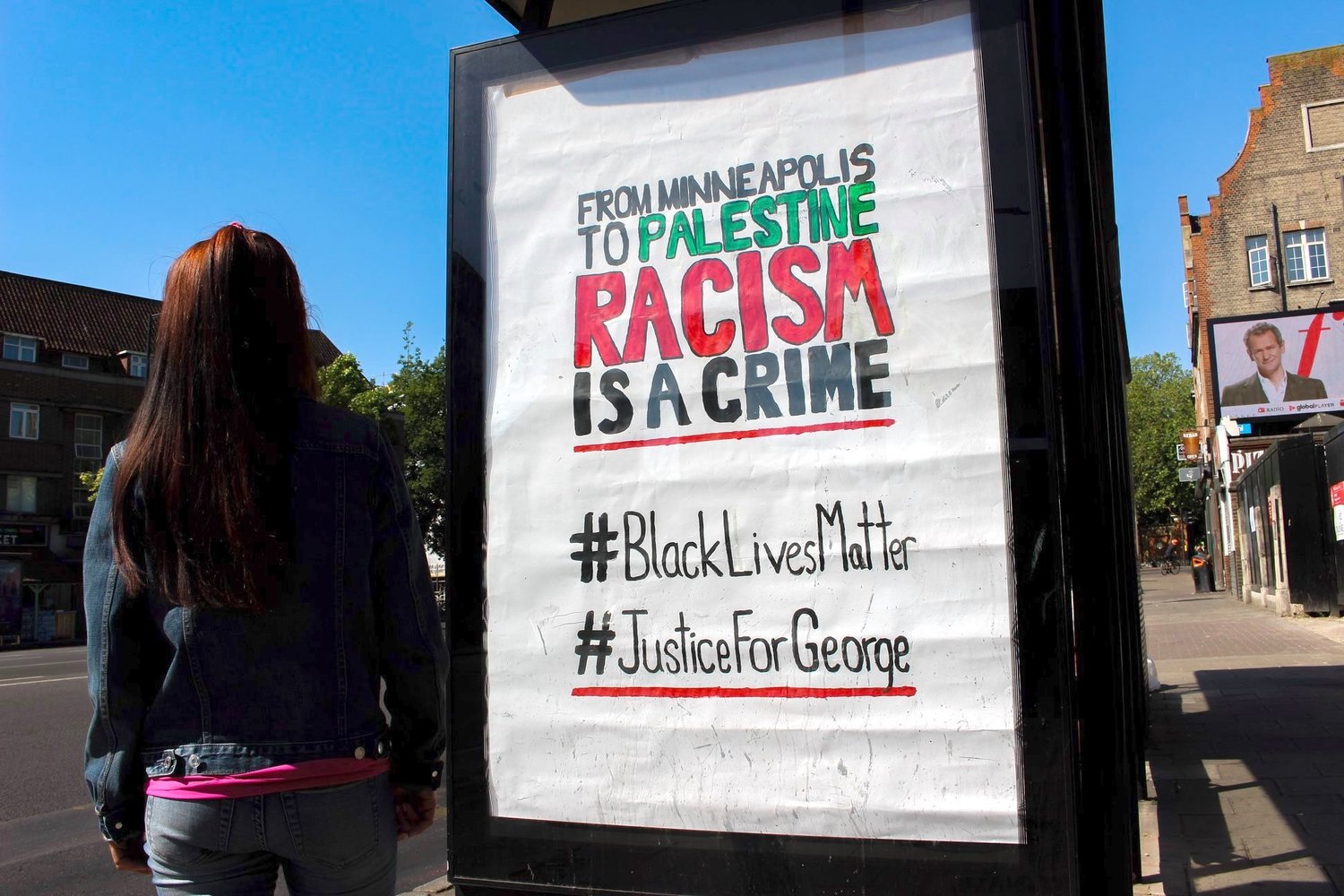 A poster from a protest in London linking the Black Lives Matter movement to the Palestinians.

The silence of the Los Angeles Jewish community and the national Jewish organizations in the face of the Fairfax pogram isn’t unique.”

For BLM, anti-Semitism isn’t a bug. It is a feature. Hatred of Israel and the Jews is part of its DNA.”

The silence of the Jews of America in the face of rising anti-Semitism is stunning.

Over the Shavuot festival on May 30, members of Black Lives Matter (BLM) carried out a pogrom in Fairfax, the oldest Jewish community in Los Angeles, largely populated today by visibly Orthodox Jews. They vandalized five synagogues and three Jewish schools.

Most of the Jewish businesses on Fairfax Avenue were looted.

As Daniel Greenfield reported at Frontpage, Allyson Rowen Taylor, a co-founder of StandWithUs, shared an account of the riots in which they chanted obscenities directed at the police and “kill the Jews.”

Aryeh Rosenfeld, whose store was looted, told the Jerusalem Post that when he came to defend his store there were people driving through the streets screaming anti-Semitic chants at the Jewish store owners.

Greenfield revealed that the Jews were not incidental victims in a larger night of “anti-racist” rioting by BLM. BLM in Los Angeles is led by outspoken anti-Semites with intimate ties to the virulently anti-Semitic Nation of Islam.

Over the past several years both the BLM-LA head Melina Abdullah and her daughter Thandiwe Abdullah, who is the co-founder of the BLM Youth Vanguard, have racked up long records of anti-Semitic rants and fawning praise for Nation of Islam leader Farrakhan. Farrakhan, who has praised Hitler, recently called Jews “termites,” and obsessively rails against Judaism and Jews.

As its charter makes clear, BLM itself is structurally anti-Semitic.

While accusing Israel of committing “genocide,” BLM blames Israel for the US war against militant Islam. Its charter states, “The US justifies and advances the global war on terror via its alliance with Israel and is complicit in the genocide taking place against the Palestinian people.”

According to the BLM charter, US military aid to Israel is the foundation of America’s problems. Because of US military aid to Israel, BLM alleges, “Every year billions of dollars are funneled from US taxpayers to hundreds of arms corporations, who then wage lobbying campaigns pushing for even more foreign military aid. The results of this policy are twofold: it not only diverts much needed funding from domestic education and social programs, but it makes US citizens complicit in the abuses committed by the Israeli government.”

In other words, Israel is the root of America’s troubles at home and abroad.

The charter accuses Israel of being an “apartheid state,” and supports the anti-Semitic boycott, sanctions and divestment campaign against Israel.

It calls for local, state and federal action against Israel.

Among other things, BLM demands that the US military budget be cut by 50 percent, “which will lead to the closure of over 800 US military bases in the US and around the world, and the elimination of the sale of weaponry to violators of human rights, reduces the use and stockpiling of nuclear weapons and return all troops back from the current theaters of war.”

So for BLM, anti-Semitism isn’t a bug. It is a feature. Hatred of Israel and the Jews is part of its DNA.

This brings us back to the pogrom over Shavuot in Los Angeles, two aspects of which expose the increasingly problematic nature of the relationship between the American Jewish community and the American left.

The first is the media’s indifference to anti-Jewish violence. Aside from a few Jewish reporters and Orthodox websites, the Shavuot pogrom was largely ignored. And when it was reported, the deliberately anti-Semitic character of the attacks was either downplayed or ignored altogether.

The media’s refusal to cover the pogrom makes clear that most US media outlets have accepted the limits on freedom of speech dictated by the left. Identity politics now dominate the left in America. BLM controls identity politics.

BLM considers Jews oppressors, not victims. So attacking them is not an act of bigotry. Jews — particularly Israeli Jews, Zionist Jews and Jews who dress in ways that identify them as Jews — are fair game. After all, if Zionism is Nazism and apartheid, then Israelis, Zionist Jews and “Jewy” Jews are racists. The graffiti on Beth El synagogue in Fairfax told the tale: “[Obscenity] Israel, Free Palestine.”

The media’s subservience to the identity politics mob was exposed earlier this month by the forced resignation of the New York Times’ op-ed editor James Bennet and his deputy for the thought crime of publishing an op-ed by Sen. Tom Cotton calling for the riots to be quelled — by military force if necessary.

This week, the Times announced their replacements. Charlotte Greensit from the Intercept will be associate op-ed editor and managing editor of the Times.

Greensit is a member of the mob. As such, last month she participated in the left’s newest blood libel that Israel is responsible for the alleged systemic racism of American law enforcement agencies when she tweeted, “Israeli security forces are training American cops despite history of rights abuses.”

The Times, which has long peppered its news stories with anti-Semitic undertones, can be expected to double down on its anti-Jewish slant with Greensit in place.

The second aspect of the Shavuot pogrom that bears consideration is the low-key responses it generated from the Jewish community. Aside from a pro-forma statement by the Anti-Defamation League’s Los Angeles office, the Jewish organization that proclaims itself the go-to place for calling out and fighting anti-Semitism has been mum. Even the Modern Orthodox communities in Los Angeles failed to condemn the attack on their ultra-Orthodox neighbors.

Greenfield reported that the Modern Orthodox communities refused to condemn the rioters even as they quickly removed Torah scrolls from their synagogues to protect them from possible looters. Rather than condemn the BLM rioters targeting their community and expressing solidarity with the victims and the police who stopped the riots from spreading, local Modern Orthodox leaders told their communities to support BLM bigots and atone for their own imagined racist crimes. Only the ultra-Orthodox cheered the police and thanked them.

The silence of the Los Angeles Jewish community and the national Jewish organizations in the face of the assault against it isn’t unique. In New York, Jews have marched against anti-black racism while their community is subjected to repeated anti-Semitic assaults by their black neighbors. Few and far between have been the condemnations of Mayor Bill de Blasio despite his repeated acts of anti-Semitic targeting and discrimination.

De Blasio wasn’t available to padlock the playground himself because he was busy participating in a mass protest with BLM in another section of Brooklyn.

Needless to say, New York Jews not only didn’t riot in response to the city’s bigotry against Jewish children in Williamsburg. When local Jewish leaders broke the locks on the playground in Williamsburg to let the children play, Jews from Park Slope and Manhattan didn’t join them. They were alone.

This is the context in which Rep. Elliot Engel, a 16-term incumbent and the chairman of the House Foreign Affairs Committee, was defeated in his primary race for reelection. Engel was long one of the staunchest supporters of US-Israel ties in the Democratic Party and a very liberal Democrat.

Jamaal Bowman, Engel’s victorious primary opponent, supports the BLM charter’s call not to legislate curbs on BDS operations. He supports conditioning US military aid to Israel on Israeli concessions to the Palestinians. Bowman ascribes to BLM’s racist view of Israel, saying that as a (racially oppressed) African American, he identifies with the Palestinians.

Both Bowman and the media that supported his campaign, (particularly Greensit’s colleagues at the Intercept) focused on Engel’s support for Israel. The undertone of their focus was clear — and anti-Semitic. They communicated the message that Engel the Jew is more loyal to Israel than to the voters of his district.

Instead of decrying Bowman and his supporters for their bigotry, many progressive Jews supported Bowman. As Peter Joseph argued in the Forward, “Jamaal Bowman’s candidacy asks our community to return to its formerly broad-based concerns and demands that we recognize how urgent it is to address and repair the social, economic, and racial suffering in our nation.

“As this election pits a sixteen-term white Jewish incumbent offering more of the same against a younger Black voice offering a response to this moment in America, Jewish voters should express their aspirations for a better future.”

In other words, Engel was too tribal and of course, too pro-Israel.

Why are American Jews refusing to stand up for themselves? Three explanations present themselves. Either they are afraid to speak up, or they are unaware of the danger, or they are part of the problem.

Like their non-Jewish counterparts, many Jews whose businesses were looted by BLM expressed support and concern for their attackers. While some of them may actually sympathize with the people who destroyed their income source, no doubt many are too terrified to criticize them. They don’t need any more trouble. And in the current atmosphere of mob rule, where the police charged with defending them are themselves under attack, caution may be the better part of valor.

The ignorant are a product of their environment. Most American Jews are Democrats and most Democrats get their news from the very news organizations that, as members of the identity-politics-dominated left, are not reporting what is happening. Large organizations and liberal synagogues are openly supporting BLM. How are average Jewish Democrats supposed to know what is happening?

This brings us to the Jews that are part of the problem.

This week, a group of far-left Jewish groups published an open letter to the community demanding that American Jews pledge allegiance to a “new covenant” based on seven new principles. The first principle: “Explicit endorsement that Black Lives Matter. Recognizing that Black Lives Matter is a statement that is inherently true and should be accepted without caveat or qualification.”

The other six principles are extrapolations and expansions of the first.

So not only is the community not dealing with BLM’s structural anti-Semitism, radical groups now demand that the rest of the community make supporting these anti-Semites and embracing their anti-Semitic cause the first principle of a “new covenant” for American Jewry.

So far, Hillel International, the Reconstructionist movement and the San Francisco Jewish Federation among others have written letters of support for the “new covenant.”

On Monday, the Wall Street Journal called on members of the political left to wake up and oppose the thought policemen of identity politics.

Sadly, it appears that the Jewish victims of those policemen may be the last to hear or heed the call.