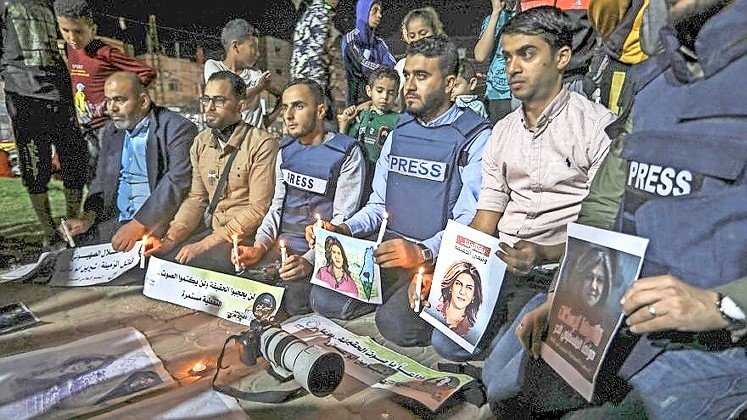 The mainstream media generally choose to believe the Palestinians, even though they routinely lie about Israel. These lies are weapons of war, deployed to incite violence and mass murder.”
By Melanie Phillips

A Palestinian Arab journalist with Al Jazeera, Shireen Abu Akleh, was shot dead last week in a firefight between Hamas and the Israelis in the West Bank city of Jenin.

When the Israelis said Abu Akleh might have been killed instead by Palestinian gunfire, journalists grudgingly incorporated this into their reporting while continuing to repeat extensively the incendiary but unsupported Palestinian accusation.

At this point, we still don’t know who killed Abu Akleh. But any fair-minded person would say the Israelis are more likely to be telling the truth.

They said that, having gone into Jenin to root out terrorists responsible for a recent wave of murderous attacks, their forces had come under “substantial fire.” After studying what evidence they had, it looked as if Abu Akleh had been felled by a Palestinian bullet.

This was because, in a video from the scene, Arabs are heard shouting: “We hit a soldier; he is lying on the ground.” Since no Israeli soldier had been hurt, however, the suspicion was that this was Abu Akleh.

Moreover, Honest Reporting’s translated commentary on this video contains another crucial line. After the shouts about a soldier on the ground, there’s a further shout: “It’s a woman.”

Hamas, which immediately removed her body, rejected Israel’s suggestion of a joint investigation to establish who did kill her and are refusing to hand over the bullet they removed from her body while insisting that the Israelis fired the fatal shot.

By contrast, the Israelis have made no assertions they can’t back up. They have pointed out the obvious fact that the truth can’t be established unless Hamas operatives bring forward relevant evidence. The fact that they are refusing to co-operate suggests that they have something to hide.

The mainstream media generally choose to believe the Palestinians, even though the Palestinians routinely lie about Israel. These lies are weapons of war, deployed to incite violence and mass murder. And the Western media duly oblige.

In 2000, French TV footage purported to show 12-year-old Mohammed al-Dura “dying” under a hail of Israeli bullets in the West Bank. In fact, the TV station had edited out of the footage a section in which the boy — who had been declared dead a few moments earlier — could be clearly seen alive and moving.

Yet the image of that child clinging to his father moments before he “died” was used as the iconic recruiting sergeant for countless acts of murder perpetrated against Israelis, Diaspora Jews and Westerners.

Meanwhile, Jenin itself was the scene of the infamous blood libel in 2002 when the western media recycled wild Palestinian claims that the Israelis had committed a cold-blooded massacre of thousands of Palestinian Arabs.

This claim was used to incite the Arab and Muslim world to further hysteria; but it was false. What had taken place in Jenin was actually a bloody battle, in which Israeli troops were trying (as ever) to root out those responsible for bombings and other terror attacks that had killed more than 100 Israelis.

In that battle, no more than 52 Arabs—most of them gunmen—had died. But the Western media never acknowledged their error or its lethal consequences.

Through such gullibility, ignorance or malevolence, the Western media have turned themselves into accomplices of a diabolical agenda.

This is again on display in Eleven Days in May, a new movie about last year’s “Operation Guardian of the Walls” in the Gaza Strip when Israel bombed the Hamas terrorist infrastructure to stop the rocket attacks aimed at killing Israeli civilians.

At the time, the media claimed that the Israel Defense Forces had killed a huge number of civilians, a high proportion of whom were children. This was the reverse of the truth.

The fact was that the 11-day Israeli bombardment of Gaza, deploying a volume of munitions so large that in the hands of any other army it would have left an enormous toll of dead civilians, killed hardly any at all. The barrage produced a vastly smaller proportion of dead civilians to combatants than has ever been achieved by American, British or any other armed forces.

According to Israel’s Meir Amit Terrorism and Information Centre, 234 Gazans had been killed — nearly half of whom were Hamas or Palestinian Islamic Jihad combatants. Of the 95 killed who had no terrorist affiliation, 52 were children — nine of whom were killed by Hamas’s own rockets falling short.

Yet Eleven Days in May, narrated by Kate Winslet and directed by Gaza-based filmmaker Mohammed Sawwaf and the British filmmaker Michael Winterbottom, features heart-wrenching interviews with the families of the dead children. These interviews are grossly decontextualized to constitute a manipulative Hamas propaganda film aimed at demonizing Israel.

It’s not just that the Israelis are grotesquely misrepresented as brutal and callous child-killers. The film fails to acknowledge that some of these child casualties were teenagers who belonged to Palestinian terror groups; some were the children of Hamas terrorists who were targeted and who had put their children in harm’s way; and some were killed by Hamas’s own rockets falling short of their target.

Britain’s Jewish Chronicle has now revealed that Sawwaf is a hard-core Hamas supporter. In 2014, reports David Rose, the Hamas media department honored him with a special award for “countering the Zionist narrative” and being able to “penetrate European public opinion” through his work.

On social media, Sawwaf has celebrated the launching of rockets against civilian targets and effectively called for Israel’s destruction. Talking about this film, he said: “Israel is never punished or deterred by the international community, and so continues to launch war after war on this poor and besieged strip.”

Such remarks should be a giveaway. Yet Western journalists behave as if such people are reliable and honest interlocutors. The film has been hailed as a masterpiece.

Western journalists routinely believe this propaganda not least because Palestinian terrorists control the narrative. News agencies supplying media reports from Gaza use Arab stringers whose lives depend on toeing the Hamas line.

Blogger David Collier, who heroically wades through the sewers of anti-Semitism in order to expose it, notes that the Islamic University in Gaza (where Sawwaf was a student) has units dedicated to turning students into Hamas propaganda stars. Gaza is churning out Hamas activists masked as journalists, charity workers, NGO staff, medical experts and endless “human-rights activists” with their image carefully laundered to dupe a Western audience.

This sealed infrastructure of lies enables Western useful idiots to claim they are incontestably driven by conscience and compassion. That’s why Winslet could state so idiotically about Eleven Days in May: “That my participation in this film could be interpreted as taking a public stand on the rights and wrongs of one of the world’s most tragic and intractable conflicts never entered my thinking.”

Of course, it didn’t. Minds like hers are closed against reality. The lies and distortions about Israel in their heads also exist in the heads of all in their social and cultural circle. Not one person in that circle will question those lies because as soon as they did so, they would find themselves outside it.

Even if the lies are exposed as such, this makes no difference. The images work. The narrative sticks. Israel loses — and will continue to do so unless and until it stops playing defense and catch-up, and seizes control of the narrative instead.