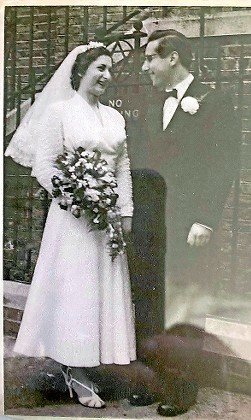 Werner Reich and Eva were married for 61 years. 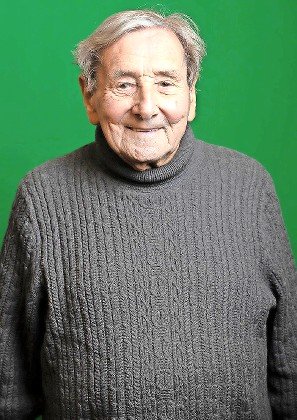 Werner Reich, who survived Josef Mengele’s experiments and the Auschwitz concentration camp before making his home on Long Island, died July 8 at his Smithtown home. He was 94.

“I think people were expecting this guy who came out of the Holocaust to be mad at the world all the time,” said his son, David. “But he was actually the exact opposite.”

“Werner Reich was an original in all aspects of the word,” said Andrea Bolender, the center’s director. “Werner gave his retirement to teaching both students and adults about the dangers of intolerance and hatred of the other.”

Bolender first met Werner in 2005 when he joined the center’s board of directors. Her father, Benek Bolender, was an Auschwitz survivor himself, and she immediately discovered a connection to Werner.

“I felt that every survivor was a parent to me, and I was a child to them,” Bolender said. “He had a wicked sense of humor, and loved to cook and bake. I can still smell the scent of the Viennese crescent cookies he would bake for us when he came to speak.”

Born in Berlin in 1927, Warner was a teenager when taken to the Auschwitz II-Birkenau extermination camp in Poland, and later transferred to Auschwitz I.

American forces liberated him and other prisoners at the camp on May 5, 1945.

He returned briefly to Yugolavia, where his family had found a period of refuge from Hitler-ruled Germany, before the Germans invaded. Then he made his way to England where he met his wife. A decade later, they emigrated to the United States where he would work as an industrial engineer and corporate executive. He would spend 61 years with Eva, devoting all the time he could to take care of her before she died in 2016.

Although he lived through the worst atrocities of World War II, Werner didn’t begin speaking about what happened until the late 1990s, after the birth of his first grandchild. For him, it was important when this new life came into the world to get his message out. So, Werner started sharing his Shoah experience in the hopes of preventing history from ever repeating itself.

He talked to audiences not only on Long Island, but around the world. Werner spoke as often as 10 times a week — and roughly 100 times a year — at middle schools, high schools, colleges and festivals. [View his TedX Talk at TheJewishStar.com.]

He traveled to England, Germany, Israel, Portugal and China.

“He did more traveling between the ages of 90 and 94 then I’ve done in my lifetime,” said his daughter-in-law, Andrea.

The message of many of Werner’s talks, among sharing his experiences, was urging people to be kinder to their fellow men and women. Yes, he talked about his experiences. Yes, he told everybody about the horrors and the atrocities of the Holocaust. But he had an overriding message of being nice to people, being good and anti-bullying.”

Those who knew Werner say he had a great sense of humor, and always felt that a bad situation could be made better by being happy instead of sad.

“He always tried to look on the bright side,” Andrea said. “We would ask him, ‘How can you always be so positive, because of all the horrible things that have happened to you in life?’ He said that he’d been blessed because he survived, he met his wife — with whom he was in love and raised a family — and had very good grandchildren.”

Besides Andrea, Werner is survived by his sons David and Mikal, and four grandchildren.

He was a member of the International Brotherhood of Magicians and the Psychic Entertainers Association, and he continued to practice magic tricks throughout his life after learning his first trick in a concentration camp.

“They’ll remember him as a very fine, loving man,” David, his son, said. “A very welcoming person, and a very positive person. When people would first meet him, they felt like they were his best friend.”

“Even though he went through a lot of adversity — and it was definitely a horrible experience — he managed to make a very positive happy experience,” Andrea added. “His message, we hope, will resonate forever: You can’t forget the atrocities, but something good could come out of it.”

“It was also a great lesson in Jewish leadership that it’s not just about winning military battles — it’s also about having the moral footings that come with being a believer in following a religious path.”

The trek continued to Shilo, where the tabernacle rested for almost 400 years, and on to Beit El, the site where Jacob had his famous dream.

The pair continued to Jerusalem, Bethlehem and Rachel’s Tomb, and on to Hebron and Beersheva, the site of a covenant treaty between Abraham and King Avimelech, which Friedman referred to as the original Abraham Accord.

Friedman said the goal of visiting these places was to focus on their biblical history; nevertheless, present-day happenings were also important.

“We got to Shilo on Lag B’Omer [in May], which is a bit of a national holiday. So here you have this ancient city — the Tabernacle rested there 369 years — but full of kids, full of people, full of life,” said Friedman. “We went from place to place to show that, on the one hand, the history of both Judaism and Christianity began at these places. But we also show these real living, breathing places where life continues to flourish.”

Friedman and Pompeo are both outspoken proponents of a Greater Israel and oppose a Palestinian state. Still, Friedman said he set out to make the film as apolitical as possible.

“We probably failed at our task. Because once you refer to it as Judea and Samaria [instead of the West Bank], already, people will think you’re making a political statement,” said Friedman.

“It’s not a secret to anyone that both Secretary Pompeo and I believe that this land was given by G-d to the Jewish people, and that it has enormous biblical and historical significance as part of the Jewish and Christian DNA,” Friedman continued. “And I suppose one could infer from that that we believe that it should remain under Israeli sovereignty. So one could surely draw that inference, but we don’t dwell on it, meaning we lay out the facts and the biblical history.”

“All the stories that you learn — whether in a day school, Sunday school, church or synagogue — they all happened here,” he added.

Friedman indicated the documentary is in the editing stages and is expected to be released in January 2023.