Tobin: Even lying Times got this right 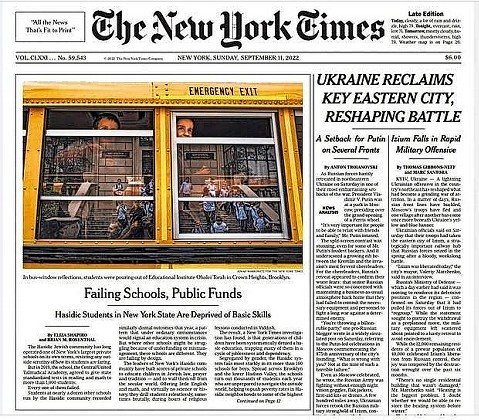 Chassidic communities are entitled to isolate their children from the secular world. But that does not mean scrutiny of their schools’ alleged failures is anti-Semitic.”
By Jonathan S. Tobin

After more than a century of biased reporting about Israel, contempt for Zionism and Israel, and a lack of interest in reporting about anti-Semitism, readers are right to regard any coverage of the Jewish community by the New York Times with skepticism.

So, after the Times invested a year of the time of two reporters and who knows how many researchers in investigating conditions in schools run by Chassidic sects in the greater New York area, the assumption on the part of many Jews was that the product of this effort would reek of prejudice.

That explains why the reaction from many Jews to the massive front-page feature published on the subject by the Times this past Sunday was intense and angry. They wondered why, in an era when inner-city public schools are notoriously failing their students, the newspaper thought that schools run by Chassidic Jews in Brooklyn and Rockland County were deserving of so much scrutiny.

That the story came after the last two years when politicians and news outlets scapegoated the ultra-Orthodox for spreading COVID-19 deepened the hurt.

The fact that the Times continues to ignore an epidemic of anti-Semitic attacks on this community from African-American assailants has also created a situation in which nothing the paper is likely to publish on related subjects will be taken as anything other than an attack on Jews.

But even if all that is true, and the Times’ reporting does betray a cultural bias and condescension on the part of its staff and the overwhelmingly liberal readership of the paper, does that mean any scrutiny of ultra-Orthodox schools is inherently anti-Semitic?

As much as it would be easy to dismiss the story, if test scores and reports from other sources are to be trusted (including from Jews who are deeply worried about the failure of this system to prepare its students for any sort of a productive life other than Torah scholarship), then there is more here than cultural or religious bias.

The ultra-Orthodox community under scrutiny here has seemed to adopt the same model as their haredi counterparts in Israel, where educational standards in their schools on secular subjects are abysmal. While most of the discussion about the haredim in Israel has focused on their refusal to do their fair share in defending the Jewish state by refusing military service, the fact that their rapidly growing ultra-Orthodox schools are solely focused on religious education while producing people who lack the rudimentary skills to support themselves is an even greater challenge for Israel.

A situation where Torah study is the only respectable profession for haredi men is one that is a recipe for endemic poverty. Nevertheless, the political muscle of Israel’s religious parties has not only guaranteed funding for these schools but also ensured that the state is never going to require that their students are given even minimally adequate instruction in non-religious subjects.

While politics has created a daunting economic challenge that poses huge dilemmas for Israel’s future, it appears a similar situation has unfolded in New York. Observers of New York politics have long understood that the ultra-Orthodox communities vote as blocs with members apparently doing the bidding of their rabbinic leadership in much the same way as in Israel. In this manner, New York politicians like disgraced former Gov. Andrew Cuomo and his successor, Kathy Hochul, have obtained the lockstep support of Chassidic enclaves in exchange for their influence in ensuring that no one looks too closely at what happens in their schools.

The result is that these institutions are turning out students who lack rudimentary skills in English and math.

You don’t have to share the contempt for religious Jews that may be widespread in the Times newsroom to be alarmed by the fact that test scores in these subjects at ultra-Orthodox schools for boys (girls, who are expected to get jobs rather than merely study sacred texts, get slightly more instruction and do marginally better) appear to be the lowest in the state. That means they are worse than those at public schools in New York where poor and minority students are being short-changed by a system that is resistant to change.

As philanthropist Michael Steinhardt wrote last week in the New York Post, the failure of these Jewish schools is a Jewish tragedy. That is why he and others have been urging greater state scrutiny of these schools with the goal of forcing them to improve their secular education. To that the communities and many of their defenders, such as the editors of the New York Sun, cry foul.

They believe that the issue here isn’t so much poor education as the refusal of the secular state — cheered on by secular Jews — to accept the desire of the ultra-Orthodox community to opt out of society. The point of the education they are giving their children is not, after all, to produce productive members of a secular society, but to lead religious lives as separate as possible from their non-Jewish neighbors.

Their fear of assimilation is such that in some quarters, there is not only hostility to Internet use and secular subjects but also to English as an everyday language. Under those circumstances, it’s little wonder that these schools must be understood as playing a role in the growth of Jewish poverty. But their defenders seem to be taking the position that any interference in their curricula is a denial of their right to religious freedom.

The secular left has been waging war on public religious observance and seeks to marginalize people of faith.

The hostility on the part of newspapers like the Times and mainstream liberal Jewish groups (like the American Jewish Committee and the Anti-Defamation League) to recent Supreme Court decisions that defend the rights of religious believers is lamentable.

But the attempt to shoehorn this controversy into the broader debate about religious freedom is unpersuasive. Those who want to ensure that ultra-Orthodox schools give students at least the basics of English and math — something that is required by the New York State Constitution — are not attempting to infringe on their right to worship or have schools dedicated to their faith.

The haredim are fully entitled to live and worship as they please, and to isolate themselves from the secular world as much as they want. But it is both reasonable and necessary for the state to ensure that their schools do not turn out students who are functionally illiterate in English and unable to do basic math.

Even if we were to dismiss the Times’ focus on the use of corporal punishment at Chassidic schools, which is deeply problematic if true but tangential to the question of their academic failures, as a function of the paper’s bias, it is not anti-Semitic to worry about the role that the schools are playing in fomenting poverty. The reality of a population that is not only growing at exponential rates due to large family sizes — something that those who care about the shrinking non-Orthodox population applaud — but also increasingly dependent on state welfare programs paid for by taxpayers, is something that must be addressed.

Nor does anyone need to be caught up, as the Times has been, in the drama surrounding defectors from the ultra-Orthodox world. The literary genre of the memoirs of such rebels against religious life is, as scholar Ruth Wisse has discussed, not new. It’s been going on since the late 19th century.

One can sympathize with such people or revile them as turncoats who are besmirching their origins, but that has nothing to do with whether Chassidic schools are fulfilling their obligations to provide a minimal decent secular education along with their focus on Judaism.

As some point out, institutions that produce students capable of understanding and studying the Talmud and other sacred texts are learning advanced reasoning skills that are often missing elsewhere. Yet as even Mosaic columnist Eli Spitzer, a defender of these schools, notes, it is something of a fairy tale to pretend that such instruction is a substitute for teaching Jewish children the basic English and math they need to survive outside of a yeshiva or kollel.

These schools should neither be demonized nor idealized; however, the idea that any outside scrutiny is an attack on Judaism is not an argument that can be reasonably defended.

As much as it can be a mistake to generalize about conditions in these schools and as much as the Times’ motives and reporting are suspect, the willingness of many Jews to reflexively circle the wagons around them and to defend the resistance of the ultra-Orthodox leadership to even minimal scrutiny or accountability for their failures in secular subjects is not merely a mistake. It’s consigning a large and important part of the Jewish community to a future of poverty that would be indefensible if we were describing any other group.