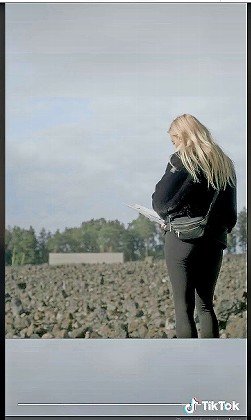 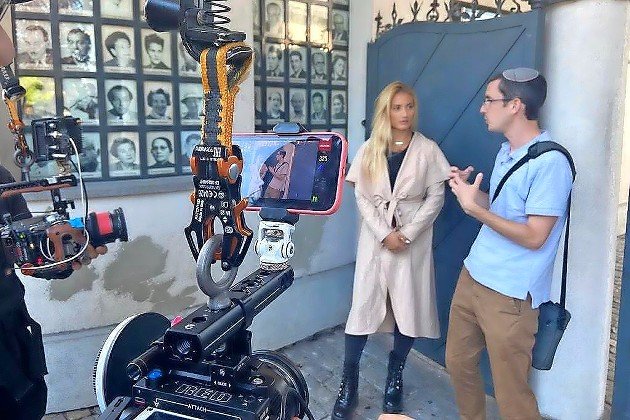 Montana Tucker in “How to: Never Forget,” with tour guide Zak Jeffay of JRoots.
SoulShop Studios 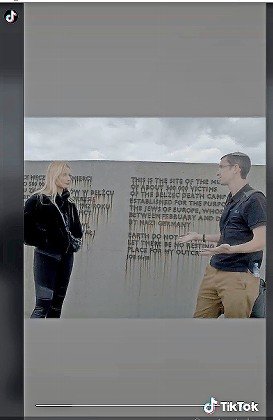 Montana Tucker in “How to: Never Forget,” with tour guide Zak Jeffay of JRoots.
TikTok Screenshot
Previous Next

There is a challenge recounting the enormity of the Holocaust in around 1,500 seconds, as the ‘How to: Never Forget’ series does. After all, the new Ken Burns documentary, ‘The US and the Holocaust,’ runs six hours. But you can’t just DM [direct message] a link to a six-hour documentary and say to somebody, ‘Watch this.’ But, you can DM a link to a highly-produced two-and-a-half minute video that will get people saying, ‘I need to learn more about this.’”
Don't delete the 6 million

In 10 episodes of ‘How To: Never Forget,’ leading up to this week’s Kristallnacht remembrance, Montana Tucker deploys her celebrity — and 9 million followers — to guarantee that the 6 million won’t be ‘deleted.’

Use these links to view Montana Tucker's 10-part series, "How to: Never Forget." View AND SHARE this docu-series of 2-1/2 minute episodes. [Episode 6 is not included, and Episode 10 is not yet available.]

By Mike Wagenheim of JNS, with The Jewish Star

At a moment of sharply rising anti-Semitism, a Jewish social media star known for her dance videos is getting deadly serious.

Montana Tucker’s 10-part docu-series, “How to: Never Forget,” has drawn millions of views on TikTok since launching at the end of last month. Tucker has nearly nine million followers on TikTok.

The series, edited into digestible two-and-a-half minute segments, is the result of an intense trip by Montana and a film crew to Poland, where they capture the story of Tucker’s grandparents during the Holocaust. The production included a trip to Auschwitz-Birkenau, where Tucker’s great-grandparents were gassed, and where her grandmother saw them for the final time.

Tucker and her production crew said the timing of the docu-series, which concluded this Wednesday, 84 years after Kristallnacht, the “Night of Broken Glass” in Nazi Germany and Austria when scores of Jews were murdered in public and tens of thousands were sent to concentration camps.

Tucker says many of her fans know she’s Jewish and that her grandparents survived the Holocaust, through occasional postings that have touched on it. But this project placed everything front and center.

“So posting a series like this, which is on a whole other level of just posting a happy picture with my grandparents, I wasn’t sure what the reaction was going to be.”

Tucker is an acclaimed dancer, singer and actress known for her choreographed dance segments with global superstars.

While the docu-series wasn’t meant to coincide with headlines regarding Jew-hatred that have dominated the news of late, but those development made the reaction to the series all the more impactful, she said.

“I am just overwhelmed with how incredible it has been. If you have a chance to go look through some of the comments on these videos, they are so powerful — from the Jewish people being so incredibly grateful that something like this is out there, but also from non-Jewish people being like, ‘I had no idea. Thank you so much for doing this. And thank you for opening my eyes.’ And that, to me, is what’s most powerful about changing people’s perspectives,” said Tucker.

The series was produced by SoulShop Studios, whose CEO, Dan Luxenberg, said Tucker is a “hero” for taking on the project.

“The fact that she’s taking over her channel and posting this to her millions and millions of followers is nothing short of heroic. She’s a role model in the Jewish community now. And non-Jewish kids around the country need a role model, and they’re seeing [Tucker’s work] and they’re grabbing on to it,” he said.

Tucker noted that she has friends in the industry who are openly Jewish behind the scenes and will post social media content about a wide range of social issues but hide their Jewish identity online.

The series debut, which reached over a million people in under 24 hours, left Luxenberg “in a state of disbelief.”

He said that while there are films, TV shows, documentaries and podcasts about the Holocaust, “the way this team got together and utilized and leveraged the ability to tell high-quality stories, through a short form medium, is literally disrupting and revolutionizing Holocaust education,” which surveys and studies show is drastically lacking among American youth.

Tucker relates during a walk through the former Jewish quarter of Krakow that after one of the first times she posted about her grandparents being Holocaust servivors, she received comments “like, ‘the Holocaust never existed.”

At that point, a caption appeared on the video, reading, “In 2020, a 50 state survey revealed 63% of millennials did not know 6 million Jews were murdered during the Holocaust.”

Rachel Kastner, the docu-series’ producer and herself a granddaughter of Holocaust survivors, told JNS that she had just had a conversation with a Jew who went to school in New York before moving to Israel and said he never learned about the Holocaust in high school.

“There is a deep, deep lack of knowledge, lack of empathy, lack of perspective and scope on how recent this genocide was and how huge it was,” said Kastner.

There is a challenge in recounting the enormity of the Holocaust in around 1,500 seconds, as the “How to: Never Forget” series does. After all, the new Ken Burns documentary, “The US and the Holocaust,” runs six hours.

Tucker and her crew shot over 100 hours of footage in the span of a week.

“But you can’t just DM [direct message] a link to a six-hour documentary and say to somebody, ‘Watch this.’ But, you can DM a link to a highly-produced two-and-a-half minute video that will get people saying, ‘I need to learn more about this’,” said Luxenberg.

“It’s a completely different model of storytelling. Just because we’ve been used to content being told over the course of one to three hours, that’s not the only way you can convey the story and pay homage to the subject.

Luxenberg told JNS it isn’t a matter of whittling down the Holocaust to small clips, but reframing the conversation to “how are you getting an audience,” noting that 1.6 million people visited the US Holocaust Memorial Museum in 2016.

“We’ve had over 1.6 million people watching our videos in a week. That alone just shows you an impact already. And people are watching these videos because they’re choosing to — it’s not like a school-mandated field trip.”

Kastner concurred, rationalizing that even within a full-length film or documentary, “there are specific scenes that stand out. We don’t remember a three-hour documentary or movie in our heads. We remember specific scenes and moments and lines. And in every single one of the episodes, Montana or Zak [Jeffay, a tour guide from JRoots who joined the production] says something that just sends shivers down your spine. And that’s what we’re doing in the editing room.”

Those shivers are exactly what Tucker feels are most impactful. Her fans are used to seeing her joyful, dance-infused, playful content. This series turns it all on its head.

“In so many Holocaust documentaries, there are survivors sharing the stories, but I don’t think there’s ever been a grandchild sharing it through their perspective, where people that are closer to my age can relate,” she said. “You see all my raw, authentic emotions. You really feel like you’re there with me. And I think that’s why people are relating to it and seeing things differently.”

Standing at Belzec, Tucker tells her guide: “How are they able to get this many people in here and then just delete it. It just doesn’t seem like it’s possible.”

“Can you imagine your entire life being ‘DELETED’ just because you were born into a specific religion?” she writes in a comment next to the video. “500,000 people were brought to Belzec and then DELETED by the Nazis. … Watch as I find out some of those victims were my family members. Family I’ll never know, all because of hatred.”

She was named, in Hebrew, after one of those victims.

“We’re here honoring them,” she says. “They probably assumed no one would ever honor them.” Her guide responds, “You’re their [the Nazi’s] worst nightmare.”

Walking the rail tracks leading to Auschwitz, where 1.1 million people were murdered, Tucker remarks, “Imagine how many people would have come from these people.”

“Can you imagine being separated from your parents while watching them get taken away to their death? That’s what happened to my Grandma Lilly in Auschwitz,” Tucker wrote in the comments. “This was the HARDEST moment of my life — holding my mother’s hand in the exact spot Grandma Lilly saw the Nazis send her mother to her death. Nothing could have prepared me for that moment … and absolutely nothing could have prepared all of the innocent people who arrived at Auschwitz and had their lives destroyed.”`

Each video ends with this message: “Share this to keep these stories alive.”

Use these links to view Montana Tucker's 10-part series, "How to: Never Forget." View AND SHARE this docu-series of 2-1/2 minute episodes.

Yad Vashem to unveil ‘Book of Names’ at UN

‘Leopoldstadt’ and the bombing of Auschwitz