Star columnist writes: If you support Israel and oppose anti-Semitism, you must vote for Trump 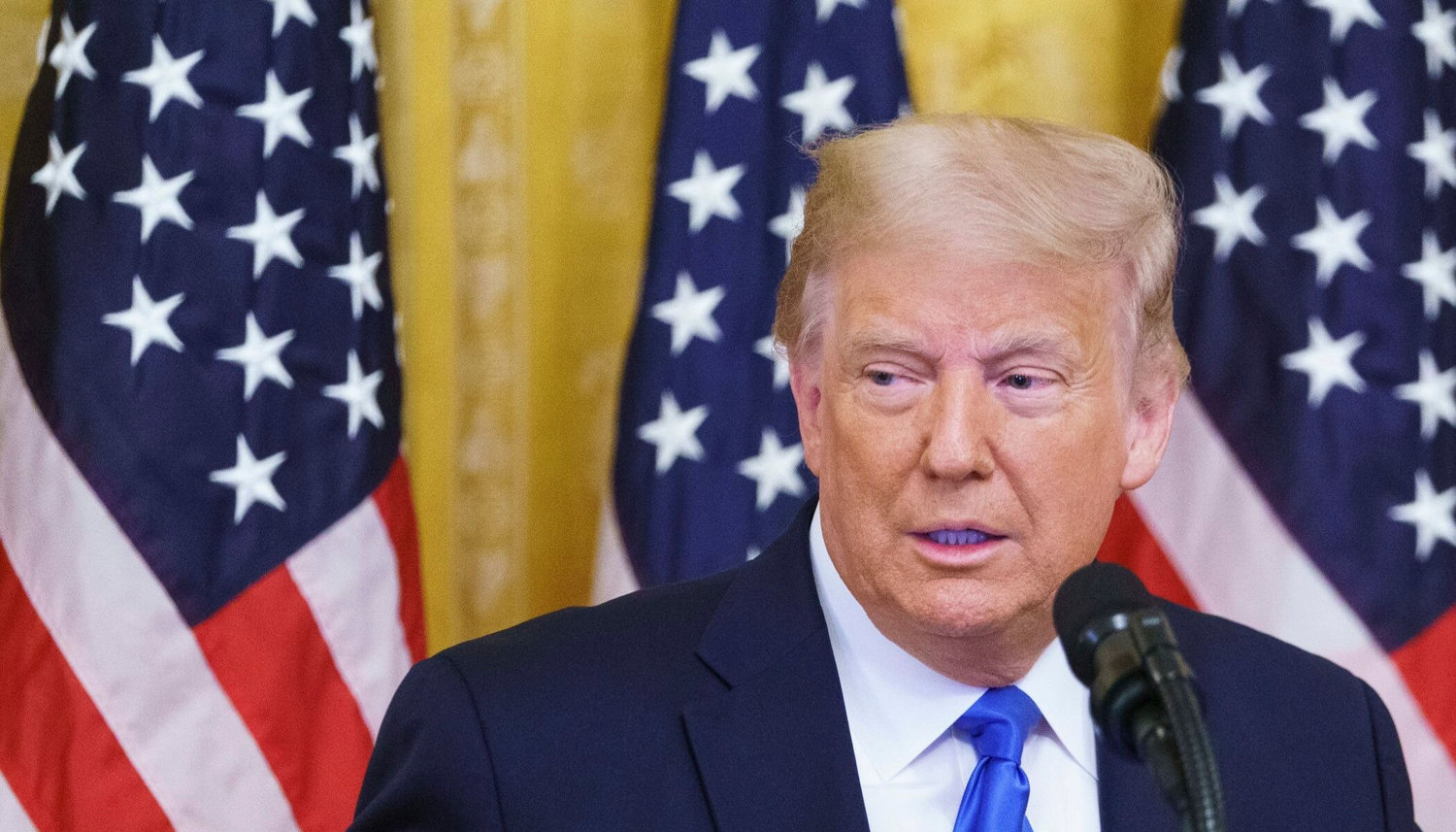 President Trump at the White House on Sept. 23.
Mandel Ngan/AFP via Getty Images
After the vote, one people: Jewish Star editorial

We have a lot at stake in next week’s election. Let’s not lose our minds — and our sense of peoplehood — over it.

“Despite our differences, we are one nation,” President Reuven Rivlin told the Jews of Israel, “with responsibility for each other and the right to demand tolerance from each other.”

The two articles published on the cover of today's Jewish Star feverishly advocate for one candidate or another, predicting a dire outcome if the other wins. While most readers of The Jewish Star will vote for President Trump, others — along with most American Jews — support Vice President Biden.

Although these articles are unlikely to change votes, we are printing them to make a point: However correct we may be in our political beliefs, others feel they are equally correct, and we should calmly and respectfully consider their perspective. We should acknowledge that among those on “the other side” are Jews who are devoted to their religion and their people and the state of Israel, and who sincerely believe that their candidate will best serve klal Yisrael and America.

Whether President Trump is reelected or Vice President Biden wins the presidency, the issues that concern us today will be with us after inauguration day, and new ones — many unanticipated — will challenge us as well.

To “guard our tongue” and avoid lashon harah does not mean we should overlook evil or danger, but rather that we think before we speak and consider the power of our words.

When the stakes require it (as they do in this election) and we speak with passion, we must insure that foremost in our hearts and minds is a preeminent passion — our imperishable love for our fellow Jews.

See also, another view: Why (Orthodox) Jews should vote for Biden

Anyone who follows the news or investigates the candidates should know there is only one choice for pro-Jewish or pro-Israel voters: a vote to re-elect President Donald Trump.

Joe Biden and the Democrats claim they are pro-Israel. Not really.

If Biden was pro-Israel, he would not have scolded the Jewish state during his first VP run, warning it then that it should get used to a nuclear Iran. If Biden cared about the Jewish state, his platform would not include having the US rejoin the awful JCPOA nuke deal and thereby allowing Iran to go nuclear in 2025.

Biden has never been a big supporter of Israel. As vice president, he never fought against Barack Obama’s blatant anti-Semitism or the anti-Semites in his party who have come out of the closet in recent years. Since his party’s base consists of extreme leftists and socialists, if he is elected, the wind will blow Biden even further against the Jews and Israel.

But the reason to vote to re-elect Donald Trump goes way beyond Biden’s deficiencies.

Trump is the most pro-Jewish and pro-Israel president. Ever. And it’s not because of politics. As political writer Dan Feinreich earlier this year, Trump has supported Jews and Jewish causes his entire life.

In the 1980’s, Trump’s father Fred Trump, himself a supporter of Jewish causes and charities, became friends with the Israeli Ambassador to the United Nations at the time, Benjamin Netanyahu. Fred’s son Donald and Bibi became fast friends.

Donald Trump continued his father’s pattern of donating to Jewish and Israeli causes.

In 1976, he received the Humanitarian Award from Jewish National Health, a Denver hospital doing research/treatment in respiratory & related disorders.

In 1983, he was presented with the prestigious Tree of Life award, the Jewish National Fund’s highest humanitarian award, for his participation in a consortium of donors funding such projects as playgrounds in Yokneam, Sufa, and on a kibbutz in southern Israel.

Trump also donated to help build new infrastructure in the Negev for Jews who were forced to evacuate Sinai under the terms of Israel’s 1979 peace treaty with Egypt. Trump’s donations were used to build greenhouses, homes, and roads for evacuees. A plaque bearing Trump’s name in English and Hebrew appears on a wall in Moshav Dekel, in the Eshkol region.

In 2003, Trump joined other New York donors to finance construction of a reservoir in the western Negev

In 2005, he contributed toward the creation of new communities for Israelis who were evacuated from the Gaza Strip.

According to TheGivingTrump.com, in 1985, the future POTUS was chairman of JNF’s Annual Real Estate Divisions Dinner Dance where over $700K was raised, the largest fundraising ever for any JNF event.

In the 1990s, Trump tried to convert his Mar-a-Lago mansion in Palm Beach into a country club, but the town council placed restrictions on his club.

He filed a lawsuit claiming the council was discriminating against his club, partly because his club was open to Jews and blacks while other established clubs excluded Jews and blacks.

“The episode shook the Palm Beach establishment, unaccustomed to having its linen, dirty or not, aired publicly.” Trump had “elevated the issue of discriminatory policies at social clubs.”

In 2000, Trump was recognized by UJA Federation NY’s Hospitality Division for being an industry leader. He received the Hotel & Real Estate Visionary of the Century Award. He gave the organization a $25,000 donation in 2012 and another $15,000 in 2014.

In addition, Trump gave a $10,000 donation to the Museum of Jewish Heritage in 2003, according to spokeswoman Lisa Safir, and a gift in 2012 for general operating expenses amounting to $100,000, an amount which puts Trump’s name on the museum’s wall of contributors.

In 2004, Trump was chosen to be the grand marshal of the Salute to Israel Parade, the largest single gathering in support of Israel, with an estimated 1 million spectators, 40 floats, 16 marching bands and dozens of entertainers.

In 2014, Trump pledged to donate more than $100,000 to the Israeli emergency rescue service, United Hatzalah, toward the purchase of four ambucycles, according to the Tazpit News Agency.

In 2015, Trump received the Liberty Award from The Algemeiner for his contributions to US-Israel relations. Trump was introduced by his daughter Ivanka when he accepted the award at The Algemeiner’s “Jewish 100” Gala. At that event, Trump said, “I have a Jewish daughter. This wasn’t in the plan, but I‘m very glad it happened.” He also added, “We love Israel. We will fight for Israel 100 percent, 1000 percent. It will be there forever.”

And that support and affection continued after Donald Trump became president. Some of his acts in support of Israel and the Jewish community include:

•Signed Taylor Force Act so US funds would not be used to pay terrorists to maim and murder Americans and Israelis (Pay for Slay).

•Stopped funding the terror-enabler UNRWA and closed the PLO office in DC.

•Appointed Nikki Haley, the most pro-Israel US ambassador to the United Nations in decades who, as the Trump administration’s voice, forcefully opposed the UN’s anti-Israel actions.

•Called out and refused to kowtow to members of Congress who support BDS.

•Was the first POTUS to visit the Kotel while in office.

•Mediated between the United Arab Emirates, Bahrain, Sudan with Israel to create deals for those Arab nations to recognize, trade ambassadors, and begin commerce with Israel.

Considering what he did before and after he was elected to the White House, there is only one good choice for Jews in the 2020 election — re-elect Donald J. Trump.

And we also need to elect more Republicans in the House and Senate to control the anti-Semites in the Democratic Party.

The Politics to Go column by Jeff Dunetz has been a regular feature in The Jewish Star for nearly 10 years. Dunetz also produces lidblog.com, presenting news “from the standpoint of a politically conservative, observant Jew.”

Purim, a festival for political junkies