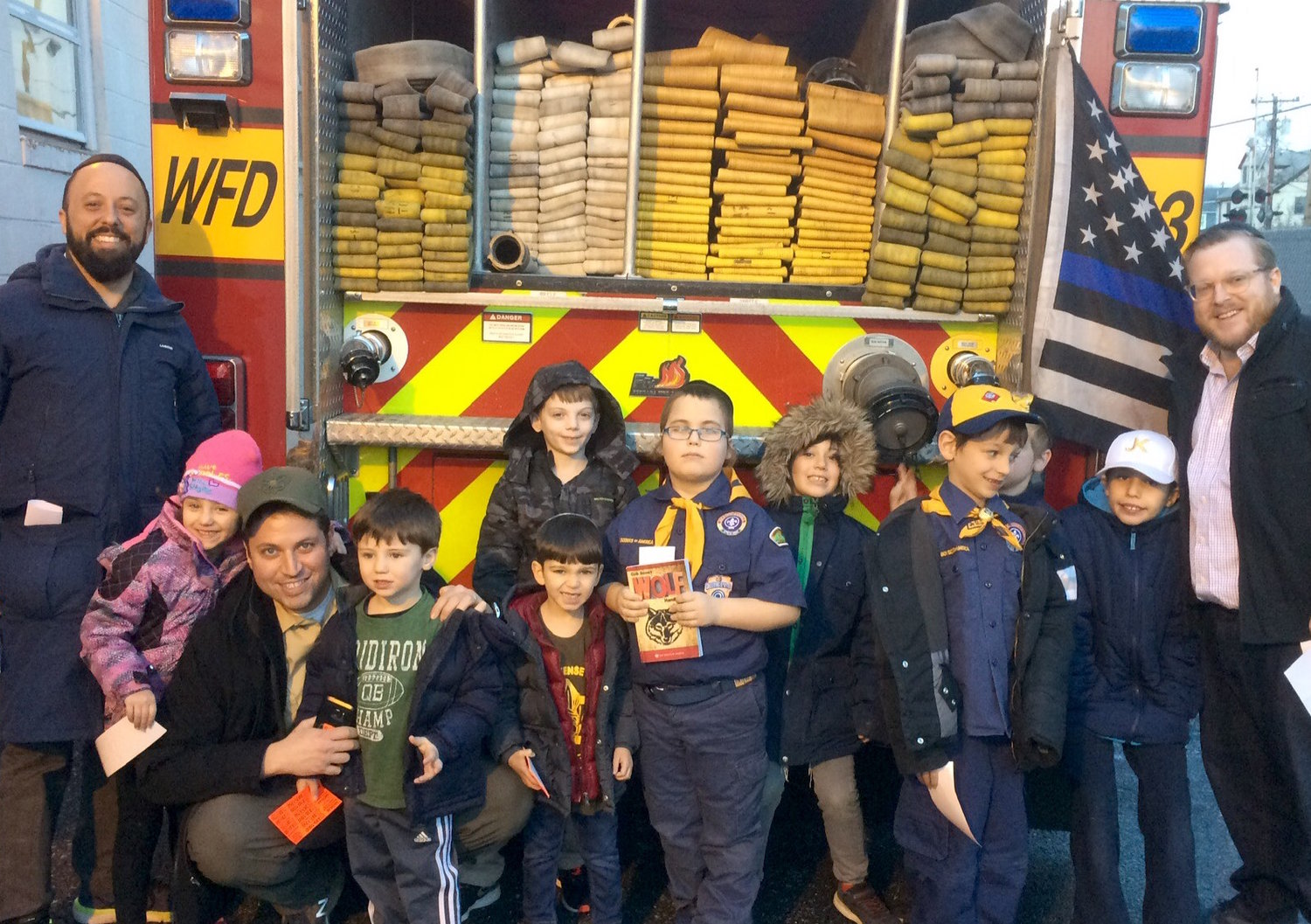 Cub Scout Pack 1818, the only shomer Shabbos and kosher Cub Scout pack in the Long Island area, chartered by the Marion and Aaron Gural JCC, had the opportunity to hear from their community’s real-life heroes when representatives from the Woodmere Fire Department and Hatzalah volunteers gave presentations to about safety at their Pack meeting.

First, everyone got an emergency contact sheet to fill out and to hang up at home. Scouts recorded important phone numbers, including their parents’ cell phone numbers, 911, Hatzalah, and Poison Control, so that they can quickly find them in case it’s ever needed.

The Scouts were then introduced to firefighters Dovid Simon and Darren Moritz, who reviewed what to do in case of a fire: have an escape plan, keep low to the floor to avoid inhaling smoke, and never hide from a fire by going into a closet. The lesson was a little scary at times, but the boys learned how important it is to be prepared.

The firefighters also demonstrated how they get into their uniforms and gear so quickly when they get a call — there’s no time to lose during an emergency!

Next, Hatzalah members Eli Langer and Yaakov Kitay showed the Scouts a stretcher. They explained how it is used to transport patients by moving them in and out of an ambulance safely. They also displayed some of the gear they use on the scene to help people before they get to a hospital.

After the presentations, the Scouts went outside and had a chance to see a real fire truck and ambulance, which are used to help people every day. In fact, they were warned to be prepared, because the vehicles were still on duty and might need to leave at a moment’s notice if there was an emergency. The Scouts were excited for the opportunity to go inside the trucks and look around at the instruments and equipment.

“The kids had a great time,” said parent Sori Levine. “They were really impressed with what the Fire Department and Hatzalah had to say about their jobs and how they help the community.”

Cub Scout Pack 1818, formed last year, is made up of about 50 boys from kindergarten through fourth grade. Parents are deeply involved with the pack, serving as den leaders and on its board of directors.

The exciting and educational day was organized by parent volunteer Aliza Stern. Chesky Mandel of Hatzalah Five Towns arranged for the presence of his team members.

For information about upcoming events and joining this shomer Shabbos kosher Pack, contact Bruce Wernick at either 646-271-2969 or packmaster1818@gmail.com.