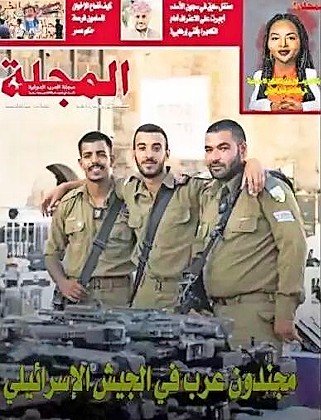 The Saudi magazine Al Majalla, published from London, has promoted a cover story unusual in the Arab world — a positive feature about Arab Israelis who serve in the IDF.

The article describes how a battalion of combat troops assembles early in the morning in the Negev Desert.

“And yet, these are not regular soldiers, but Arabs who chose to volunteer to fight and even sacrifice their lives to defend the state of Israel,” the magazine tells its readers.

“These young people, who include women, are proud to be part of the Israeli army,”  the article continues. “One of the young men, A-Raqib Imad, says proudly, ‘It’s a great honor to hold a weapon in one hand and the Quran in the other to defend my homeland, Israel.”

The article also says that mainstream media outlets err in their portrayals of the Israeli military out of the mistaken perception that it only represents Jewish Israelis, and notes that the IDF represents all Israelis — Jews, Muslim, and Druze.

One of the interviewees is Maj. Ala, an Arab woman who currently serves as deputy IDF spokesperson in Arabic. The article notes that she was promoted to major in 2021, becoming the first Arab Muslim woman to hold that rank in the history of the IDF.

“In the first 18 months [of my service] I kept the fact that I was serving a secret. But my mother came into my room when I was on leave one weekend, without knocking, and found the Israeli uniform. She looked at the uniform and looked at me and started to cry. But quietly, so no one would hear,” Ala tells the magazine.

It took a year and a half for Ala’s father to forgive her decision, but in the end, both he and her mother accepted their daughter’s decision and have even expressed pride that she is serving.

The article mentions Arab-Israeli opposition to members of the community enlisting in the IDF, quoting former MK Hanin Zoami, who said, “Israel aspires to enlist the poor and the unemployed to work in the army. Ninety percent of the Arabs who serve in the Israeli army aren’t necessary to the defense of Israel. It’s a political issue.”

Al Majalla also spoke to Alaa Hassan Kaabia, an Arab-Israeli who spent two decades in the army and reached the rank of lieutenant colonel.

“The IDF is the only institution in which there is no discrimination and there is total equality and integration. It’s not true that people enlist merely for economic reasons. Most of the Arab-Israelis who joined the army did so for one reason — they want to be part of the country. They want to integrate into civilian society and get better employment opportunities.

“Most companies prefer candidates who completed military service,” said Kaabia, who now serves as deputy spokesman for Arabic media at the Foreign Ministry.