Russia and Iran are heading for defeat in Ukraine 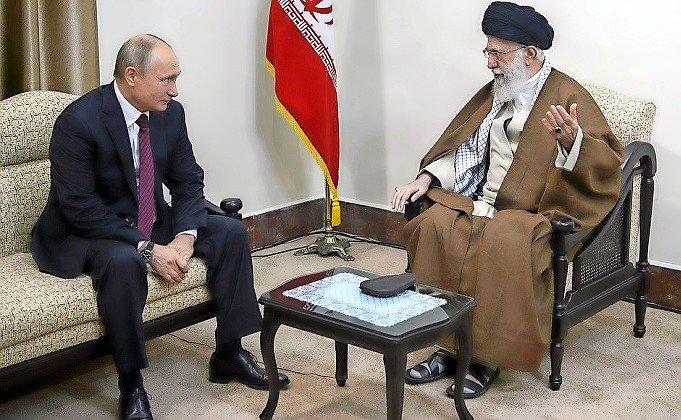 Let us seize the moment and deal the Russian-Iranian alliance the blow it deserves.”
By Ben Cohen

Those who are nostalgic for the heyday of neoconservatism might want to know that on Wednesday, former President George W. Bush was scheduled to host a video discussion with Ukrainian President Volodymyr Zelensky. Bush — whose famous 2002 “Axis of Evil” State of the Union address listed Russia’s loyal ally Iran alongside North Korea and Iraq — has said that he regards Zelensky as a Winston Churchill for our time, while a statement from the George W. Bush Institute announcing the event urges the US to “provide the assistance, military and otherwise, to help Ukraine defend itself.”

Isolationists on the right and “anti-war” advocates on the left will doubtless sneer at this event as an exercise in the kind of warmongering we thought we’d left behind in Afghanistan and Iraq. But the concerns raised in those conflicts have little bearing on the brutal Russian invasion of Ukraine. No-one is talking about deploying US or NATO troops on the ground in a combat situation, nor is there any discussion of an international administration to supervise the growing portion of Ukrainian territory that is being liberated from the Russian occupiers. The democratic government in Kyiv has asked for weapons, but it is Ukrainian fighters who will operate them and Ukrainian officials who will manage postwar reconstruction.

Moreover, the timing of the event with Bush and Zelensky is fortuitous. Last week, the Ukrainian armed forces achieved their most important breakthrough yet, as Russia was forced into a humiliating withdrawal from the southern city of Kherson it captured in the early days of the invasion.

For months, Kherson was the locus of Russia’s reign of terror, with thousands of the city’s residents beaten, arrested and tortured for protesting the Russian incursion, the rape and abuse of women and girls as young as 12 and the abduction of nearly 2,000 Ukrainian children taken from their families and removed to Russia itself. Last Friday, Kherson’s battered citizens emerged onto the streets to the welcome sight of the Ukrainian national flag and patrols of Ukrainian, not Russian, troops.

While it remains true that Kherson is a city fraught with danger, with boobytraps littering its streets and the remainder of Russian forces now gathered on the opposite bank of the River Dnipro, there should be no mistaking that Kherson also marks a decisive victory.

It’s important, therefore, that the international community assists the Ukrainians to build on this momentum. If victory is defined as the total expulsion of Russian forces from Ukraine, then the triumph in Kherson is the best evidence so far that such an outcome is possible. It is also eminently desirable; it is, of course, the Ukrainians who have suffered the most from Russia’s illegal aggression, but the rest of us, regardless of where we live, have been smarting from the war’s impact on food and energy prices at a time when our economic health is seriously deteriorating.

The current situation has additionally exposed the degree to which Russia’s leaders have alienated the international community. Indeed, there is only one state that is willing to concretely aid Russian dictator Vladimir Putin in his bid to eliminate Ukraine as a sovereign nation: Iran.

Last week, the head of Russia’s Security Council, Nikolai Patrushev, flew to Tehran at the invitation of his Iranian counterpart, Adm. Ali Shamkhani. On arrival, Patrushev treated journalists to a rant about the nefarious western media’s supposed “disinformation” campaign regarding Ukraine before heading into discussions with Shamkhani and others that focused on how Iran can shore up the crumbling Russian war machine.

Chiefly, that involves the supply of lethal weaponry; the Shahed-136 and Arash-2 drones that have already wrought devastation on Ukraine’s population centers and possibly Fateh-110 and Zolfighar missiles with ranges in the hundreds of miles. Such an equipment list is an indication of how Russia intends to fight this war going forward, by visiting destruction upon Ukraine’s civilian infrastructure in order to provoke the exodus of millions more refugees westward as the bitter cold of winter sets in.

In war, timing is everything. Ukraine’s armed forces have already proven the dictum that an army that believes in what it is fighting for is a superior force in the face of a larger, better-equipped enemy with low morale. The significance of this has been recognized in key international capitals, especially in Washington, DC, where the U.S. government last week supplied a further $400 million in defense assistance that included the HIMARS rockets deployed so effectively by the Ukrainians as well as Humvees, Stinger missiles and ammunition rounds.

Other countries debating similar moves should follow the U.S. example. That includes Israel, which — as I argued here last month — has been presented with a golden opportunity to underline its credentials as a leading member of the community of democratic nations. In addition, Israel also has an opportunity to inflict, through its involvement in Ukraine, a major defeat upon Iran and its aim of eliminating the Jewish state from the map in much the same way that Putin intends to do with Ukraine.

There will be those, as ever, who push caution with various arguments. Fear that poking Russia may cause it to destabilize other parts of the world, most obviously the Middle East, where it retains a notable if depleting military presence in Syria, is one. Observing that Russia is the world’s second-largest provider of natural gas and the third-largest supplier of petroleum, and that consequently we need to keep its leaders sweet, is another. Apocalyptic warnings that a desperate Putin will turn his nuclear arsenal on western cities is yet another.

Ultimately, the goal of all these perspectives — which present questionable assumptions as undisputed facts — is to stave off total defeat upon the Russians, thereby allowing Putin’s regime to present its survival as a victory, just as Saddam Hussein’s dictatorship in Iraq did after the 1990 Gulf War.

Dithering at a time when we should be focused on further defeats for the Russians in the Ukrainian theater only helps Putin, who is manifestly not the pragmatic, benevolent autocrat which too many Western politicians inanely believed him to be for two decades. Let us seize the moment and deal the Russian-Iranian alliance the blow it deserves.