Speaks to 5 Towners at parlor meeting in Woodmere 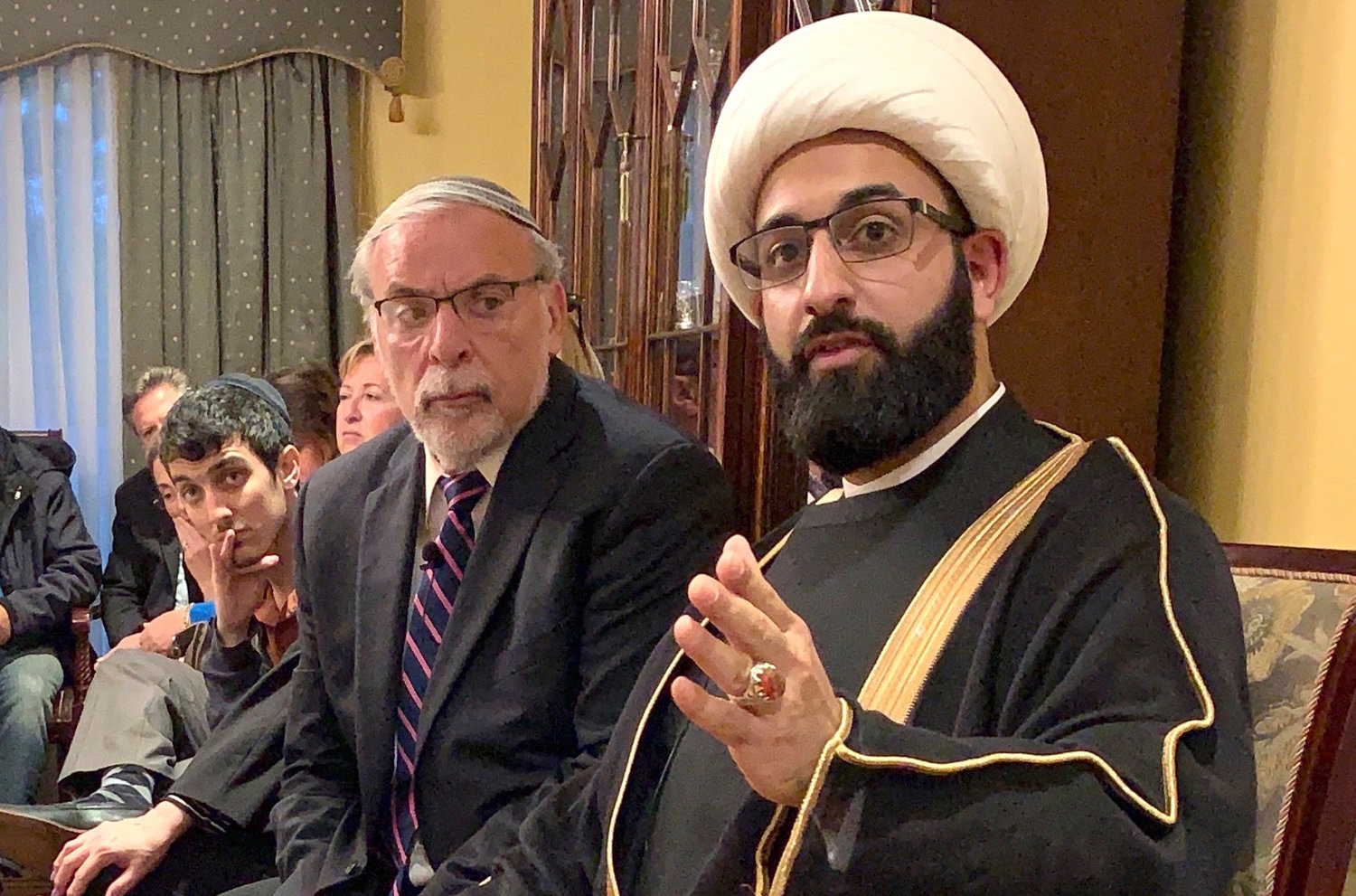 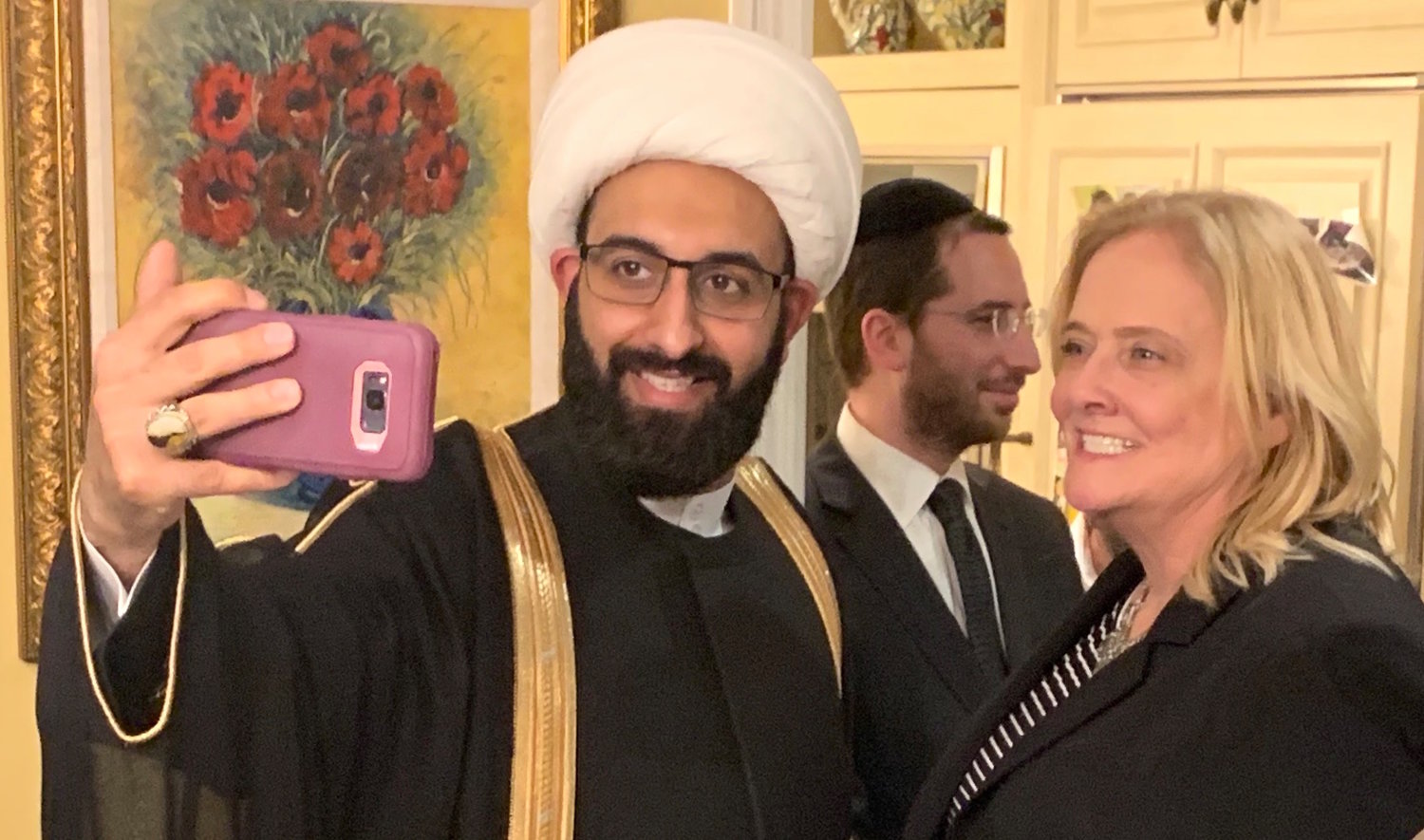 Imam Mohammad Tawhidi takes a selfie at the request of a fan, a Christian supporter of Israel who traveled to Woodmere to meet Tawhidi at last Wednesday evening’s parlor meeting.
The Jewish Star / Ed Weintrob
Previous Next
By Ed Weintrob

An Iranian-born Australian Shia imam told a Five Towns audience last Wednesday evening that he’s onboard with Israel — and that the Koran agrees that the land of Israel belongs to the Jewish people.

Muslim leaders who maintain otherwise, Imam Mohammad Tawhidi said, do so only to further their nefarious political goals.

A social media phenom, Tawhidi was invited to the parlor meeting, in the Woodmere home of Robert and Laurie Koppel, by former Assemblyman Dov Hikind.

“The imam has taken it upon himself to speak straight, to tell the truth,” Hikind said.

Regarding disputes between Jews and Muslims over Jerusalem, Tawhidi sided with the Jews.

He insisted that Muslims had no claim to Jerusalem. “A verse in the Koran that refers to a journey by Muhammad from Mecca to ‘Al-Aqsa Mosque’ cannot mean the mosque by that name now in Jerusalem because today’s Al-Aqsa was built after Muhammad’s death, during the second Caliphate of Umar,” he said.

“The Koran couldn’t have referred to this place — it didn’t exist.”

Tawhidi said that when he challenged his teachers regarding the Al-Aqsa Mosque, he was told not to pursue the matter.

As for references in the Koran to violence against Jews and others — he said those were in the context of tribal warfare and not relevant today.

Muslim scholars have differing views on this point, and on Jerusalem.

“What is Ilhan Omar doing with the head scarf that my mother wears, that all the women in my family wear?” he asked. “What is she doing with that, that [former KKK leader] David Duke is praising her and telling everybody that she’s the one we need in government?”

“There are mosques in America where Ilhan Omar and Rashida Tlaib cannot go because they’re completely rejected,” he said.

Tawhidi discounted reports that American Muslims were being indiscriminately targeted for abuse and he rejected the term “Islamaphobia.”

“I don’t believe there’s anything called Islamaphobia,” he said. “Phobia is an irrational fear. Fearing ISIS is not irrational.”

Hikind bemoaned the rising tide of anti-Semitism in America and proclaimed the need to act against it.

“I can deal with the Farrakhans of the world, with the anti-Semites,” Hikind said. “The problem is when good people don’t stand up and do the right thing because it’s not politically correct.”

On the other hand, Hikind said, now we’ve met “a beautiful friend like the imam, someone who is outspoken on many issues. He loves the Jewish people … he says that Palestine is the land of the Jews.”

Host Robert Koppel said afterwards that he was pleased by the turnout.

“There’s almost no one who was invited to this who didn’t come,” Koppel said. “To Jews who have so few friends in the world this is so refreshing.”

The event was attended mostly by Jewish residents of the Five Towns, but also by a few Muslims and by a Christian supporter of Israel who said she is a follower of Tawhidi on Twitter and who posed with him for a selfie.

Tawhidi, author of “The Tragedy of Islam: Admissions of a Muslim Cleric,” was also Hikind’s guest the following night at the Avenue N Jewish Center in Brooklyn.