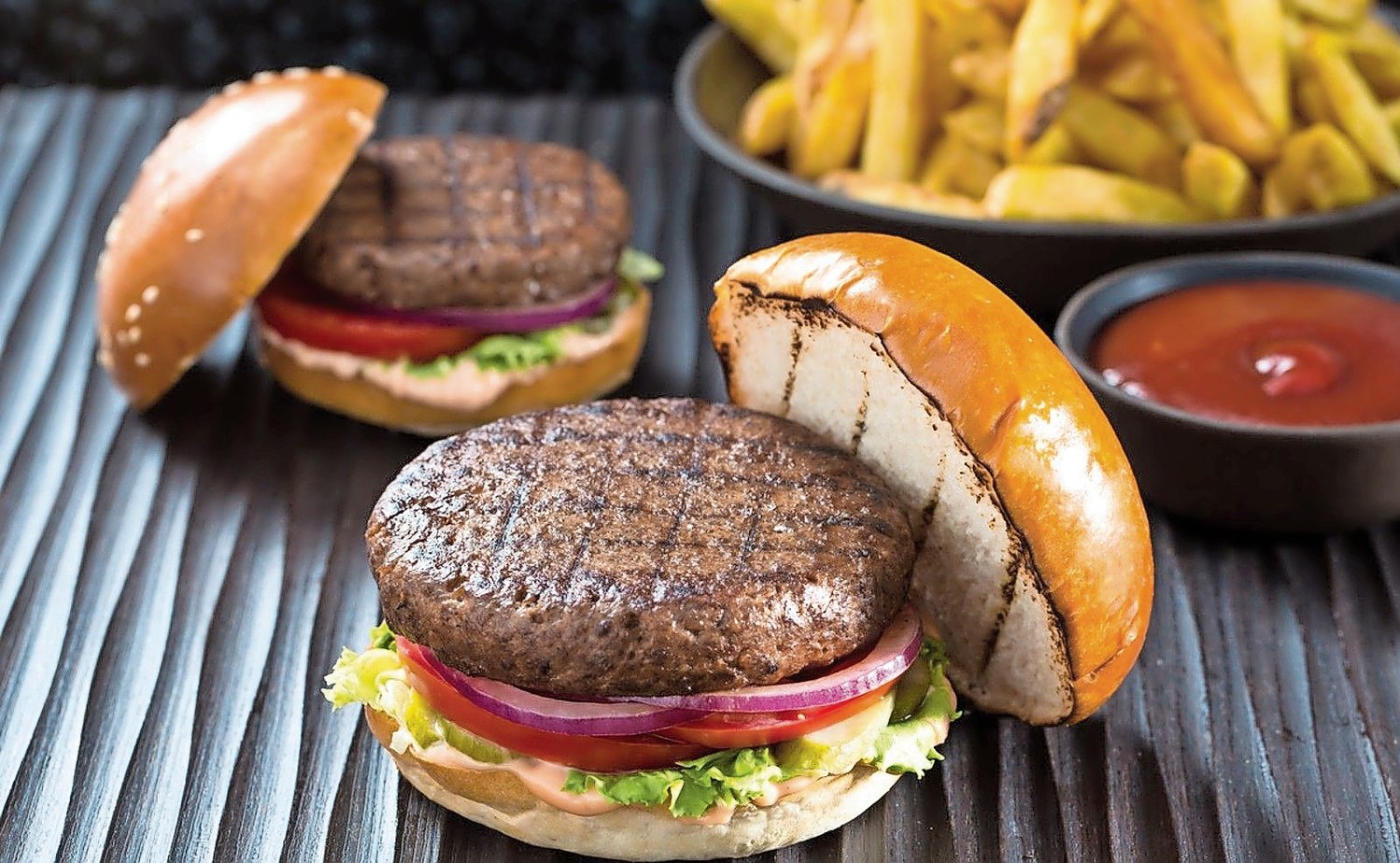 These “parinted” burgers — not quite as fast to prepare as a meal from Star Trek’s replicator — are vegan.
SavorEat 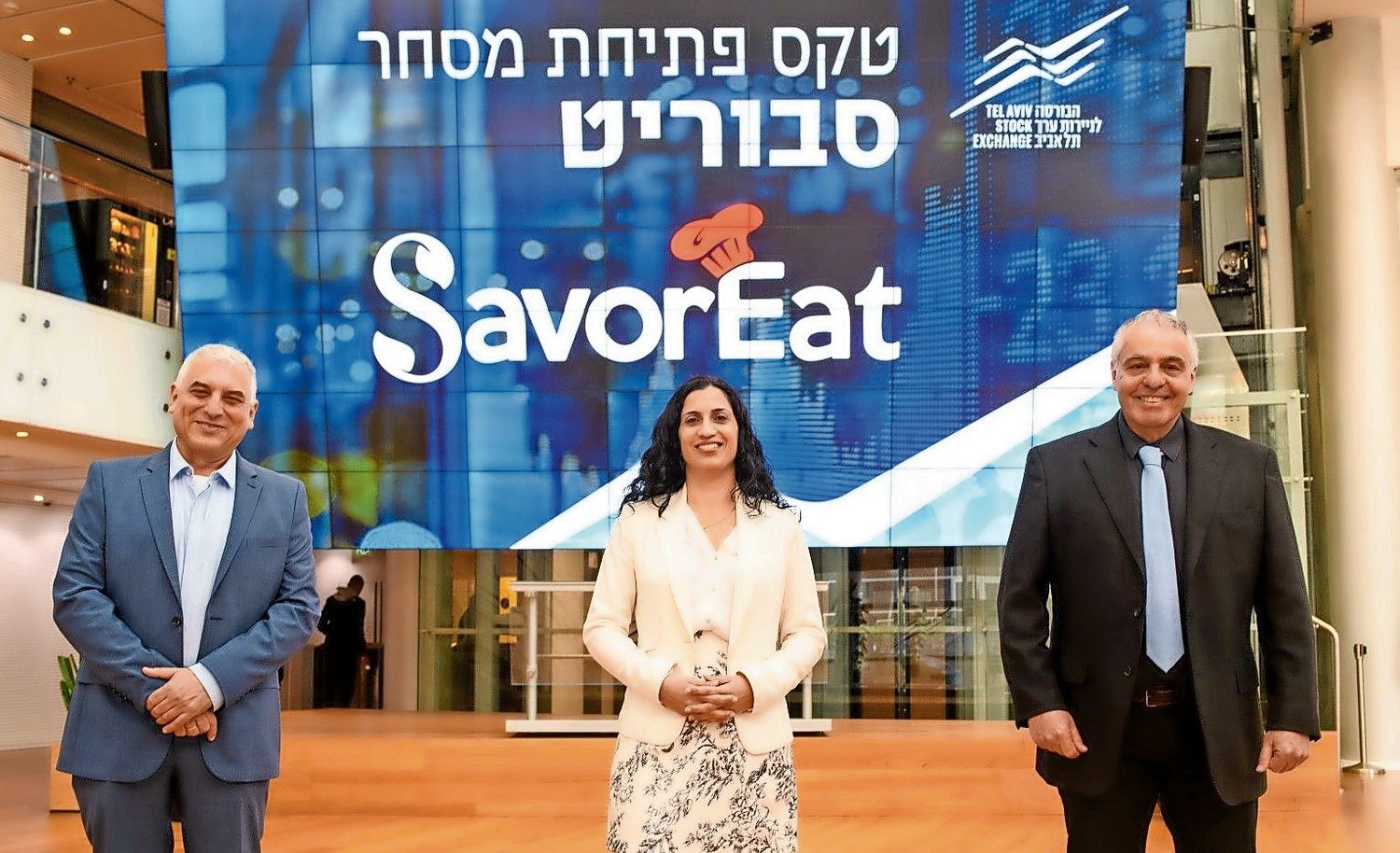 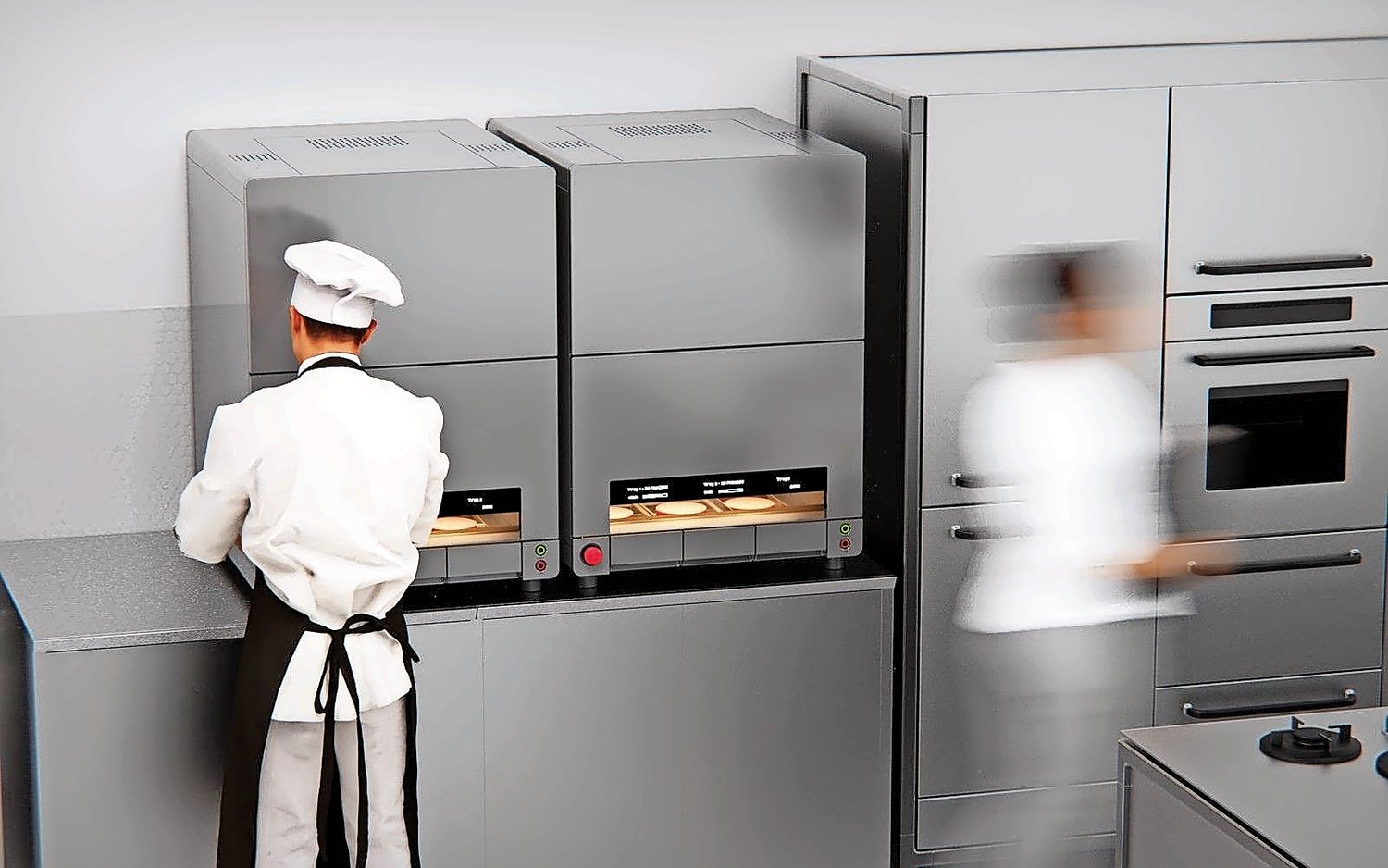 The RobotChef is designed for the food-service industry initially.
SavorEat 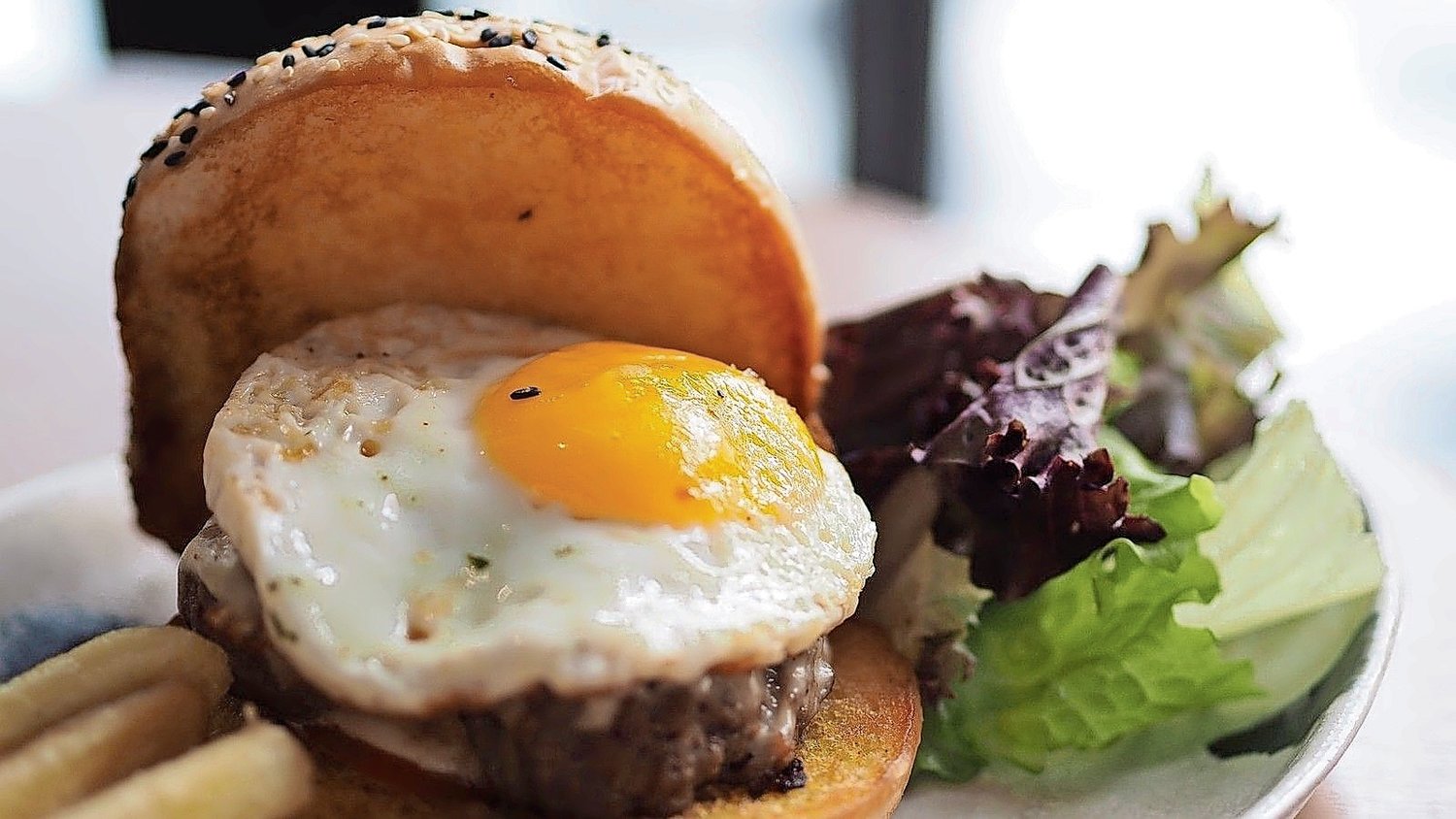 In the works: Vegan eggs.
Aivene Cheong on Unsplash
Previous Next
By Brian Blum, Israel21c

Star Trek had its replicator. Now Israel has Robot Chef, a standalone unit that creates food items on the spot, to the diner’s specifications.

It won’t be as quick as when Jean-Luc Picard famously commands his food unit to brew up “Tea, Earl Grey Hot,” but six minutes isn’t that long to wait for a custom-designed burger made right at your table.

Oh, and did we mention that the burgers are vegan, gluten free and with no antibiotics, preservatives or GMO ingredients?

SavorEat is the company with this galactic vision for food preparation.

The Rehovot-based startup has a partnership with the Burgus Burger Bar chain in Israel to bring custom “meat” patties to fast food diners around the country. (BBB also owns the Mozes and Burgerim restaurants, although the latter aren’t receiving SavorEat printers in this initial round.)

The company has its origins in the lab of Hebrew University professors Oded Shoseyov and Ido Braslavsky, who developed the technology that SavorEat subsequently licensed.

Shoseyov and Braslavsky are both active members of the SavorEat team with Shoseyov as the company’s chief science officer.

SavorEat’s burgers are based on cellulose, a zero-calorie, naturally occurring organic derivative of plant fiber. Cellulose replaces starch as a binder when constructing a variety of 3D-printed food. The cellulose is loaded into cartridges inside the unit. Software then determines the right mix — how much material each cartridge should eject and in what order.

“I don’t like to call it 3D printing,” SavorEat CEO Racheli Vizman tells ISRAEL21. “It’s more a digital manufacturing process and the ‘recipe’ is a kind of computer code. The plate moves up and down, left and right – that’s why it’s called 3D.”

Once the burger is “printed,” the machine slides it over to an integrated grilling unit that cooks it. Diners can decide if they want their burger rare, medium or well done. (The unit unfortunately doesn’t dispense ketchup or mayonnaise — at least not yet.)

“We can adjust it so that you’ll get 22 percent protein and someone else will get 70 percent,” Vizman notes. “All with no human touch,” which should also help avoid accidental food contamination, a Covid-19 era benefit.

SavorEat currently prints a single burger at once, but “we wish to print up to eight at a time within about six minutes,” Vizman says.

The result should be less expensive for restaurants than other meat alternatives that need to be cooked on a real grill. “You don’t need to hire an expensive chef or sous-chef. You just need the cartridges and the application.”

SavorEat’s latest concept, a vegan egg substitute, is based on the same cellulose technology but doesn’t require the printer.

To make that difference clear, the company is spinning it out as a separately branded subsidiary: Egg ‘n’ Up.

Egg ‘n’ Up will be sold as a liquid (“like a bottle of milk, only a bottle of egg,” Vizman quips) — but these plant-made eggs function just like the real thing. Several forms of the product are planned.

“We’ll have one egg replacement product for omelets and another for bakeries,” Vizman says.

The new venture is backed by $2.5 million in funding by Millennium Food-Tech, which was one of the original investors in SavorEat. SavorEat raised nearly $5 million before going public on the Tel Aviv Stock Exchange in 2020, where it raised another $13 million.

The goal for both SavorEat burgers and Egg ‘n’ Up eggs, Vizman says, “is to provide quality, healthy and tasty plant-based products to our consumers. We believe that leaving a footprint in an additional sector, apart from our meat alternatives, will open up new business opportunities.”

Those opportunities could be huge: Vizman estimates the global egg market at $200 billion a year industry; it’s expected to jump to $244 billion in the next two years. Mexico is the most egg-citing country, followed by Japan, China and the United States.

So now for the $64 million question: How does it taste?

The plant-based eggs are still a work in progress, Vizman told ISRAEL21c, but the burgers are just about ready.

ISRAEL21c sampled them at SavorEat’s Rehovot headquarters. There are three options: the Sporty, the Chef’s Choice and the Juicy.

We tried the latter, which is plenty juicy and even a little messy (though not as much as a Beyond Meat patty). The thick burgers are missing the classic flame-broiled flavor of a Burger King Whopper, but SavorEat more than makes up for this with a product that’s fresh, not frozen.

Like its more established competitors, SavorEat assures these burgers have no gluten, cholesterol, added hormones, allergens or antibiotics. And the Robot Chef is ideal for restaurant or hotel chains because you get a consistent product each time.

From 2017 to 2019, meat consumption rose by 5 percent whereas meat alternative products rose by 30 percent, Vizman says. “We can see this is a trend that is here to stay.”

Egg ‘n’ Up’s eggs are still a year or two away from being commercially ready (R&D should be done by the end of 2022). In the meantime, Robot Chef is starting its restaurant trials for burgers.

As with SavorEat, Egg ‘n’ Up aims to first crack the US and European markets with a B2B (business-to-business) model, selling directly to the food-service industry. A consumer egg alternative will arrive sometime after that, Vizman hopes.

Robot Chef has a similar trajectory for home use, eventually to take pride of place in consumer kitchens next to the SodaStream machine.

SavorEat was founded in 2018 and has 12 people on staff; Vizman is now interviewing for a CEO and a VP of R&D for Egg ‘n’ Up.

Israel has become a hotbed for food-tech companies. Aleph Farms, Redefine Meat, Rilbite, SuperMeat, Future Meat and More Foods are all working on burgers — some plant-based and others real meat grown in a lab without harming animals.

There are an estimated 50 alternative meat startups in the country. Two food-tech incubators — The Kitchen and Fresh Start — help keep innovation fueled.

Israel’s strength in food tech stems in part from the fact that “we are a small ecosystem,” Vizman notes. “Everyone knows everyone. I see a lot of people moving from healthcare into food-tech. Cultured meat which involves growing tissue from cells, comes from work done in the biopharmaceutical industry.”

Vizman believes that Robot Chef, SavorEat’s plant-based burgers, and eventually Egg ‘n’ Up will “be the next revolution after the microwave. You will have a robot at home, there will be cartridges for different products. The machine does everything automatically.”

There’s a hidden advantage for food makers as well: The more Robot Chefs out there, the more data manufacturers can collect on customers’ preferences — for example, are people buying more turkey or beef at a particular time of year?

“Big data is the future,” points out Vizman, who has a degree in chemistry and an MBA, and previously managed companies in the medical devices and healthcare spaces. Among others, she was COO of Beyond Air, which developed a solution to treat respiratory diseases with nitric oxide.

In her new gig, “I want to be the bridge connecting science and business,” she says. “I only want to be involved in startups that make the world a better place.”

Beyond 9 Days, brisket wasn’t on the table