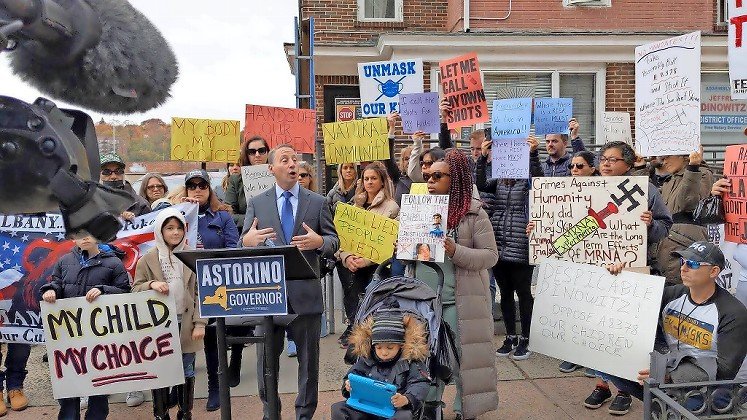 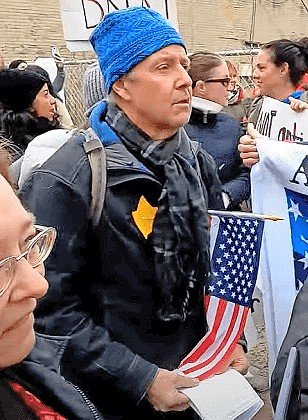 Vaccine/mask protester wears a yellow Star of David during a rally outside the Bronx office of Assemblyman Jeffrey Dinowitz on Sunday, Nov. 14.
Previous Next
By Combined Sources

Riverdale was a focus of national attention this week as its Jewish assemblyman was targeted by dozens of anti-vaxxers, including at least one displaying a swastika and one wearing a yellow Star of David.

At the same time, Riverdale’s left-wing “Squad”-friendly freshman member of Congress, Jamaal Bowman, joined J Street on a trip to Israel and came under attack from the Democratic Socialists of America because his anti-Israel animus appeared to fall short of DSA standards. He was also criticized on the right for traveling with J Street.

The Madison, Wisconsin, DSA chapter called Bowman “unfit” to be a DSA member, citing his July 28 vote to allocate $3.3 billion toward Israeli military aid and Sept. 23 vote to provide $1 billion in Iron Dome funding. The letter also pointed to Bowman commemorating the late former Secretary of State Colin Powell as “an inspiration.”

The DSA’s National Political Committee said on Monday it was “aware of the trip” and of complaints “from various DSA chapters and members.”

“The NPC is treating this as its highest priority right now,” it said.

On the J Street trip, Bowman and other legislators met with high-ranking Israeli and Palestinian officials, including Foreign Minister Yair Lapid.

Sunday’s demonstration outside the Bronx office of Assemblyman Jeffrey Dinowitz, organized by Republican gubernatorial candidate Rob Astorino, protested a Dinowitz-sponsored bill that would require that children be immunized against Covid-19 to attend school.

Dinowitz slammed the display of the symbols as “repugnant and offensive.”

“People are free to express their opinions on vaccine policy and on any issue, but I draw the line at swastikas,” he said. “To stand next to swastikas and yellow Stars of David outside of a Jewish legislator’s office shows a lack of integrity at best and an embrace of right-wing extremism at worst. This is not who New York needs as governor.”

Astorino, who served two terms as Westchester County Executive and was an unsuccessful candidate for governor in 2014, spoke out Monday against the woman who carried the sign with the swastika that compared the vaccination requirement to Nazi Germany. “Absolutely inappropriate,” he said on Twitter.

Dinowitz has championed vaccination mandates in the past. He co-sponsored a bill in 2019, signed into law, that banned religious exemptions for vaccination requirements in schools following a measles outbreak that affected many Orthodox Jewish communities.

“This is not about vaccinations. It’s not anti-vax. It’s about anti-mandate,” one Sunday demonstrator told PIX11. “All parents should have a choice about whether their children are vaccinated or not.”

But some of the protesters evoked hateful imagery.

Dinowitz tweeted pictures that showed a woman standing near Astorino, holding a sign with a swastika that said “Nuremberg Code,” along with messaging claiming coronavirus vaccines violate the medical ethics standards put in place after Nazi doctors experimented on concentration camp victims. Dinowitz also shared an image of a man with a yellow Star of David pinned to his chest and holding an American flag.

Anti-vaccine activists have compared administration of the coronavirus vaccine to medical experiments by Nazis during the Holocaust and have used the yellow Star of David as a symbol of what they say are oppressive public health measures in the form of mask and vaccine mandates. When nationally-prominent anti-vaxxers — including a Shoah survivor — made this point at a recent Lawrence meeting, they were appauded by members of the Five Towns Orthodox community who attended.

Last week, attendees at a Kansas government hearing wore Stars of David and claimed their actions were not “offensive” or “controversial,” but rather a “reminder [that] everything Hitler did … [was] in accordance with the laws of his country,” according to the Kansas Reflector. In late September, the mayor of Anchorage said it was “actually a credit to” Jews when anti-maskers wore Stars of David to an assembly meeting. He later apologized.

And in July, the leader of the Oklahoma Republican Party compared private companies requiring employees to get a coronavirus vaccine to the Nazis forcing Jews to wear the Star of David on their clothes. He later doubled down on his comments, saying the symbol took away Jewish people’s freedoms, just like the vaccine card.

“Displaying Nazi symbolism anywhere at anytime is unacceptable,” Mayor-elect Eric Adams tweeted, adding that he stands with Dinowitz, “the Jewish community, and decent people across the City in condemning this antisemitism.”

Bowman’s district, which covers portions of Westchester and the Bronx, has a substantial Jewish population. His predecessor, Eliot Engel, whom he ousted in a primary, was one of the most pro-Israel Democrats in Congress.

Jacob Kornbluh, senior political reporter for the Forward, tweeted that Bowman seems to have developed a good working relationship with the pro-Israel community while maintaining his credibility with progressives.”

The congressman’s nuanced views on Israel is the subject of a column by Ben Cohen in this week’s Jewish Star.

In a separate conversation reported by a local Jewish community leader, Bowman expressed the fear “that a vote against the Iron Dome could be interpreted as license to kill Jews,” Cohen reported.