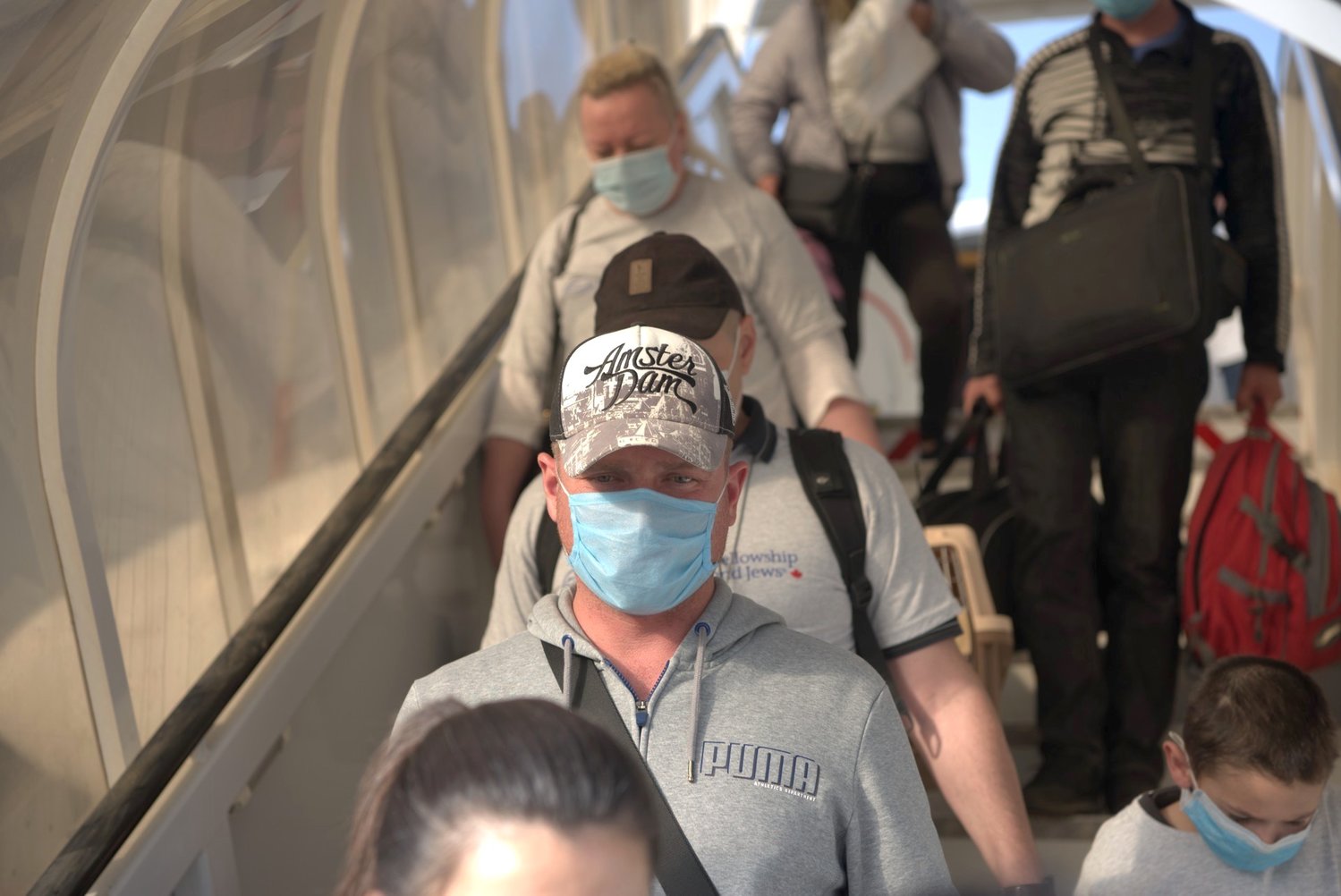 A group of new Jewish immigrants meant to arrive in Israel in March instead entered Ben-Gurion International Airport on May 20, 2020, due to delays as a result of the coronavirus.
Arik Shraga 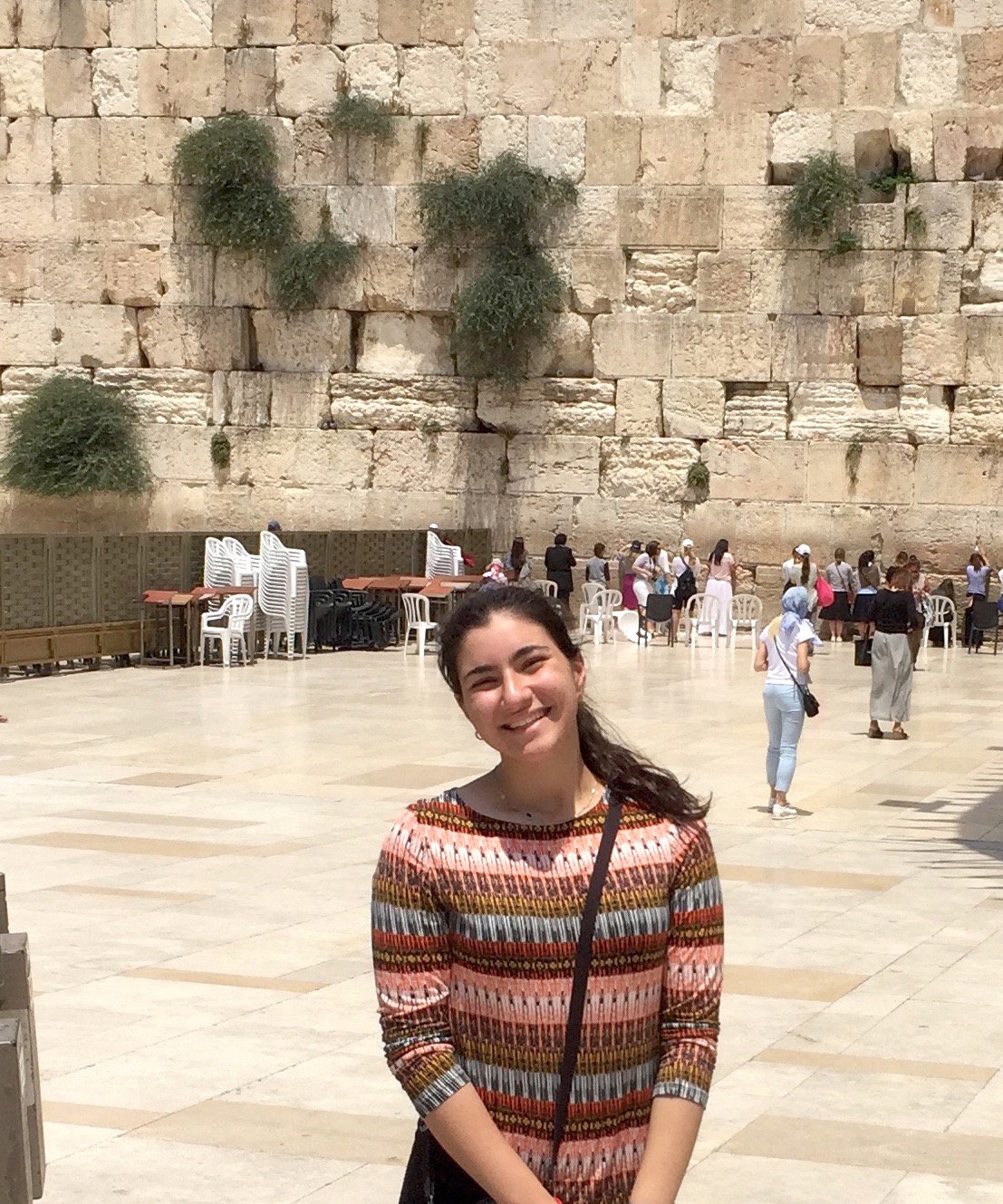 New olah Shira Hudes, at the Kotel, is enrolled in medical school in Beersheva.
Previous Next
By Deborah Fineblum, JNS

In a time of darkness, a time of pandemic, pandemonium and power struggles, a thin ray of light can be seen in the Jewish world.

The results are in: In May, the number of North Americans applying to make Aliyah was double what it was last year at this time (814 vs. 424). In fact, last month was the biggest ever in the 19-year history of Nefesh B’Nefesh, the nonprofit that with the help of Israel’s government and the Jewish Agency for Israel has already shepherded some 60,000 North American Jews to new homes in Israel.

“We’ve seen small bumps, but nothing like this,” says Marc Rosenberg, Nefesh vice president for Diaspora partnerships. “What we saw this past month is absolutely remarkable. And while they may not be major numbers, they are major increases.”

With New York, California and New Jersey leading the way, this spring’s uptick in new immigrants isn’t limited to North Americans. Jewish Agency officials say they’re seeing a “definite rise in the number of aliyah applications around the world,” especially in North America, France and Mexico. Folks seem ready to make the move, even though it means spending their first two weeks as newly minted Israeli citizens in badood (Hebrew for quarantine).

“COVID-19 gave us an opportunity to slow down our lives and find out what’s really important to us,” says Jay Brown, who made the move from Los Angeles with two children and his wife Michal, an Israeli who “was ready to go home.”

“It’s only these last few months that I’ve been asking myself, what am I holding onto here?” he said. “I realized I’ve been chasing money like a chicken without a head. So I said, ‘No, our kids are not going to grow up like this. They’re 7 and 10, and need to be raised with Jewish values.”

It’s something Rosenberg hears from many of the incoming olim. “This period of staying home has given them a rare opportunity for intense reflection on what their life is about, what’s important to them at whatever stage they are in life.”

And many, especially those who having gotten habituated to working remotely during the pandemic, are looking to bring their jobs with them to Israel — from the radiologist who’s set to analyze images thousands of miles from his office to the human-resources manager planning to run her department from her new home in Israel.

Others submitting applications this spring include students and young professionals, many attracted to both the allure of living in Israel and the low-cost colleges, universities and graduate schools that offer a future unencumbered by massive student debt. Others plan to serve two or three years as lone soldiers in the Israel Defense Forces before attending college or graduate school.

And though idealism still drives them eastward, Rosenberg says many of today’s incoming Jews see Israel as a place for both the head and heart.

This appeal of Israel as a quality place to live has turned the idea of aliyah on its head, says Ruth Wisse, a historian.

“Historically, the natural course of immigration is always to move from a poorer environment to a richer one; it’s human nature that nobody moves for downward mobility,” says Wisse, retired Harvard University professor and now Distinguished Senior Fellow at the Tikvah Fund. “So, during the early days, aliyah was unnatural; you were moving to a poorer place then. But now it’s not that kind of aliyah anymore,” she adds. “Today, you no longer have to sacrifice your comforts to live as a proud Jew in the land of Israel.”

This represents what Rosenberg calls “a dramatic shift for Diaspora Jews, from seeing Israel as simply a safe haven for Jewish refugees to being a smart choice for building a life and a family. And they see that Israel with its good schools, vibrant Jewish community and flourishing lifestyle has also handled the virus well. So all of a sudden, they’re recalibrating what Israel can be for them.”

Israel has fared better than much of the world in containing the virus, immediately going into emergency mode, using intelligence, technological, medical and military resources to grapple with the threat of widespread contamination. To date, there were more than 17,000 confirmed cases in the country, with a total of 298 resulting deaths and some 15,000 people recovered from the illness. They also put into place measures to assist the Palestinian Authority and the leadership in the Gaza Strip to help them contain potential spread as well.

New immigrants also include empty-nesters, who see Israel as a viable, affordable and Jewish place to spend their retirement, including the appeal of low-cost and comprehensive health care.

Moshe and Shelly Kamionski, also of Los Angeles, are retirees-in-process (she’s finished with her optician job; he’s a semi-retired lawyer and a rabbi) with three sons already living in Israel and a daughter, a recent “corona bride,” planning to follow soon.

“We have 14 grandchildren in Israel,” says Moshe, who was born there 70 years ago to a mother who came as a teenaged Polish halutzet (pioneer) and a father who fought in Israel’s War of Independence in 1947-48. “It’s nice to see our grandchildren over FaceTime” he says. “But we can’t hug them or take them to school. I also feel safer in Israel than in LA now.”

There’s a noticeable shift from the “someday” mindset to hitting “send” on aliyah applications, says Rabbi Menachem Penner, the Max and Marion Grill dean of REITS, Yeshiva University’s Rabbi Isaac Elchanan Theological Seminary. “Typically, the number of people who actually go through with the process represents a tiny percentage of all those who’ve been thinking of doing it for years,” he says.

Another factor encouraging folks is “that our existence in America feels a bit more fragile than it did before,” Penner says. “Rising anti-Semitism and certainly COVID have shown us that the world can change in a day. And when we realize we are living in historic times, we have to be open to changing our lives accordingly as part of the tide that’s turning.”

What’s more, coronavirus-related travel restrictions mean that Diaspora Jews can no longer get to Israel without making aliyah. “Many of us always thought we can have one foot in America and the other in Israel,” says Rabbi Penner. “But this has taught us that we can’t have two homes — that at the end of the day, we have to decide where we really belong.”

And he says, though his work at YU keeps him in New York for now, he’s “jealous of people whose purpose is now there, and I very much look forward to when it’s my time.”

At 23, Shira Hudes has already decided where she wants to build her future. Starting with a move this summer to Beersheva where she’s enrolled in the medical school at Ben-Gurion University of the Negev.

“Living in Israel has always been my dream,” says the native New Yorker. Though she was initially pursuing a student visa, “the pandemic reminded me of what’s important, and it pushed me to take action. I realized then that I’ve always wanted to make aliyah someday, so why not just do it now?”

Zionism and the love of Israel was something her late father transmitted to her, says Hudes. And with her knowledge of Russian (her mother was born in Georgia) and her rapidly improving Hebrew, as a future doctor, Hudes is hoping to be able to communicate with Israeli patients in any of three languages.

And, now that she’s finally made up her mind, she says, “I feel so much more connected to Israel. When I’m there, I feel like I can breathe better, that everything is clearer. Especially with what the world is going through now, Israel feels like an anchor keeping me grounded amid the chaos.”

Given the challenges of the past few months, “this new wave of Jews seeking to return to their homeland fills us with hope, energy and optimism,” says Rabbi Yehoshua Fass, co-founder and executive director of Nefesh B’Nefesh. “We look forward to welcoming each and every one of the olim to their new home.”

It’s too soon to tell for certain, attests Rosenberg. “Whenever there’s a paradigm shift, it’s hard to see it while it’s going on, but this much I can tell you: The people who preparing to come now, in addition to having their lives enriched by living here, are going to be contributing so much to the future of Israel.”