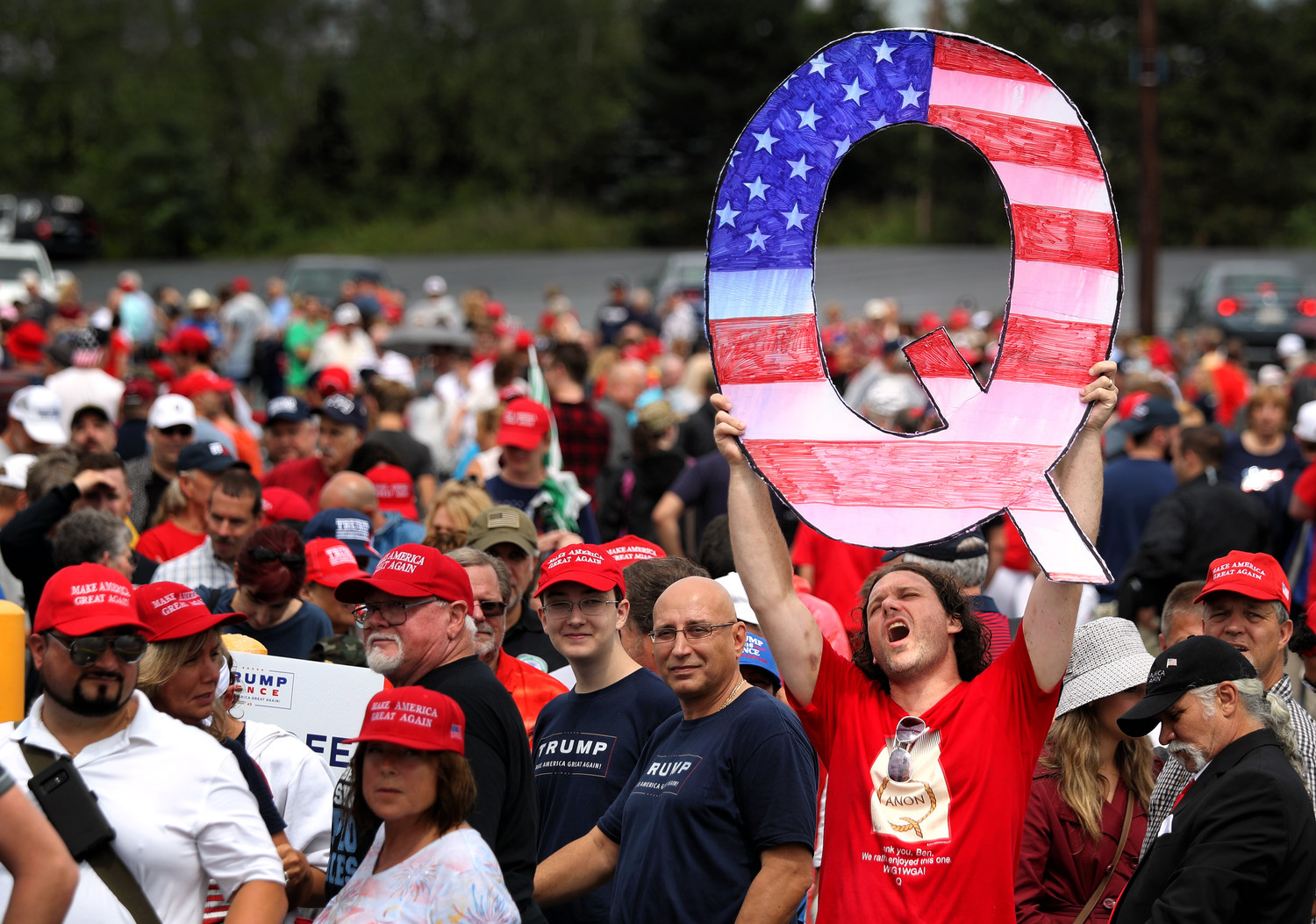 The slogan appeared on shirts and signs at President Donald Trump’s campaign rally Tuesday in Tampa, Florida, for a Republican congressman, Ron DeSantis, prompting confusion and concern from across the political spectrum.

What is Q, exactly?

“Q,” it turns out, refers to QAnon, a conspiracy theory growing in popularity among some on the far right. The conspiracy centers around an anonymous online figure, Q, who, according to The Daily Beast, claims to possess top-level security clearance.

QAnon followers believe that there is worldwide criminal conspiracy controlled by top Democrats, and that Trump, always in control, has manipulated the Mueller investigation to trap the “real criminals” — Hillary Clinton, Barack Obama and other leading Democrats.

Posts by Q, dubbed “breadcrumbs” by loyalists, claim that even Arizona Republican Sen. John McCain is a target of Mueller’s investigation.

The conspiracy has one overarching and optimistic message for its supporters: Trump is in charge of everything, and his enemies, largely Democrats and liberals, will soon fall.

After the Tampa rally, a reporter asked White House press secretary Sarah Sanders if Trump “encouraged the support” of the participants in Q-related shirts.

“The president,” Sanders responded, “condemns and denounces any group that would incite violence against another individual and certainly doesn’t support groups that would promote that type of behavior.”

The conspiracy does not explain what the president’s enemies are being “investigated” for. Some accuse Clinton and Obama of colluding with Russian President Vladimir Putin, while others suggest that these Democrats, along with Hollywood figures and world leaders, are participating in a global pedophilia ring.

According to the conspiracy, every American president before Trump was engaged in criminal conspiracy with pedophile rings, the “deep state” and pharmaceutical companies to enslave the American people.

Is this any different?

While some have criticized media coverage of QAnon for elevating the movement, the fact that hundreds of conspiracy theorists are showing up to real-life rallies for the president, whom they see as a potential authoritarian savior of the country, strikes many as an ominous sign of an emerging lunatic fringe.

Ted Mann, writing in Tablet, notes that Q posts are “framed as dispatches from the shadow war between the establishment and Trump, the intended audience for which was the weird, huge pro-Trump digital community.”

Although once limited to marginal Internet message boards like 4chan and 8chan, Q over the past year has amassed a host of new believers and followers. A video explaining the theory has amassed nearly 200,000 views, while the QDrops app, which sends alerts related to the theory, climbed near the top of the Apple app store rankings earlier this year.

In June, a man driving an armored vehicle and carrying two firearms forced the shutdown of a highway near the Hoover Dam. He held a sign referring to one of QAnon’s pet theories about Democratic criminal activity.

Q has also targeted Michael Avenatti, lawyer of Stormy Daniel, and has posted photos of Avenatti’s office and of a man standing outside it. Q later posted that Avenatti had been sent a “message.”

“The frightening thing about QAnon isn’t that a bunch of Americans believe in a looney conspiracy theory (what else is new),” Slate writer Jordan Weissmann tweeted. “It’s that they’re waiting for Donald Trump to arrest his entire political opposition.

“These people are ready for military rule.”

So, is QAnon anti-Semitic?

Although not specifically so, some of QAnon’s archetypical elements — including secret elites and kidnapped children — are reflective of historical anti-Semitic theories.

“In all Western culture, you can argue that all conspiracy theories, no matter how diverse, come from the idea of the Jews abducting children,” Chip Berlet, the co-author of “Right-Wing Populism in America: Too Close for Comfort,” told The New York Times in April. “Stories about globalists stealing children for sex aren’t that far removed from stories about Jews stealing children to use their blood for making matzah.”

In addition to these central elements, QAnon, as an open-source conspiracy theory comprised of Q’s relatively vague posts, gifts followers with ideological flexibility, enabling them to supplement the conspiratorial canon with additional, sometimes anti-Semitic theories.

The QAnon narrative is “flexible enough to fold in just anything that makes the news,” the Daily Beast’s Will Sommer wrote in July.

For example, when NBC’s Ben Collins recently attempted to explain QAnon, one supporter alleged that his script had been “written by Jacob Rothschild,” a reference to the Jewish banking family that has been at the center of anti-Semitic conspiracies for centuries. Others have expressed support for the Seth Rich conspiracy, which involves a Jewish staffer for the Democratic National Committee who was shot dead in 2016.

“The vast majority of QAnon-inspired conspiracy theories have nothing to with anti-Semitism,” said the Anti-Defamation League’s 2017 “Anti-Semitism Globally” report. However, the report said QAnon followers, likely due to the conspiracy’s flexible nature, often refer “to Israel, Jews, Zionists, or George Soros” as boogeymen aligned with supposedly criminal Democrats in opposition of Trump.

Q, rather than the mysterious individual’s followers, has referenced Jewish philanthropist Soros as an ally of the criminal Democratic cabal. For Q, Soros is an enemy. For some of Q’s followers, so are Israel, Jews, Zionists and the Rothschilds.