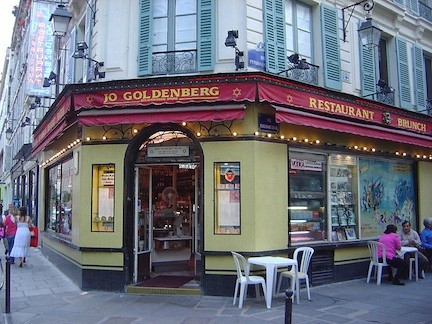 The Jo Goldenberg Restaurant in the Jewish quarter of Paris, attacked by Palestinian terrorists in 1982.
David Monniaux via Wikimedia Commons
By Stephen M. Flatow

After January’s Islamist terrorist attacks in Paris, the Obama administration pledged to assist the French authorities in every way possible. Now it has a chance to make good on that promise.

The French government recently issued arrest warrants for three Palestinian terrorists involved in an earlier attack on a Jewish restaurant in Paris—and one of them is being sheltered by the Palestinian Authority. That earlier attack should be of particular interest to the United States government, since two American citizens were among the victims.

On Aug. 9, 1982, Palestinian terrorists firing submachine guns and hurling hand grenades attacked lunchtime diners at the Jo Goldenberg Restaurant, in the Jewish quarter of Paris. Six people were murdered, 22 wounded. Among the fatalities were two women from Chicago: 66-year-old Grace Cutler and 31-year-old Ann Van Zanten, a curator at the Chicago Historical Society.

If the names Grace Cutler and Ann Van Zanten are not familiar to you, don’t be surprised. They are among the more than 100 Americans who have been murdered by Palestinian terrorists since the 1960s but have been almost completely forgotten. They are not even mentioned on the U.S. State Department’s website, where rewards are offered for information leading to the capture of killers of Americans abroad.

Sadly, the State Department has never shown any serious interest in bringing Palestinian killers to justice. Evidently it fears that putting such terrorists behind bars in America would anger the PA and create a crisis in American-Palestinian relations. And so justice remains trampled in the dust.

The only instance in which the U.S. government issued an arrest warrant in such a case was in the wake of the 1985 hijacking of the Achille Lauro, and the murder of wheelchair-bound Leon Klinghoffer. That, however, was before the U.S. had a relationship with the Palestine Liberation Organization and before the PA existed.