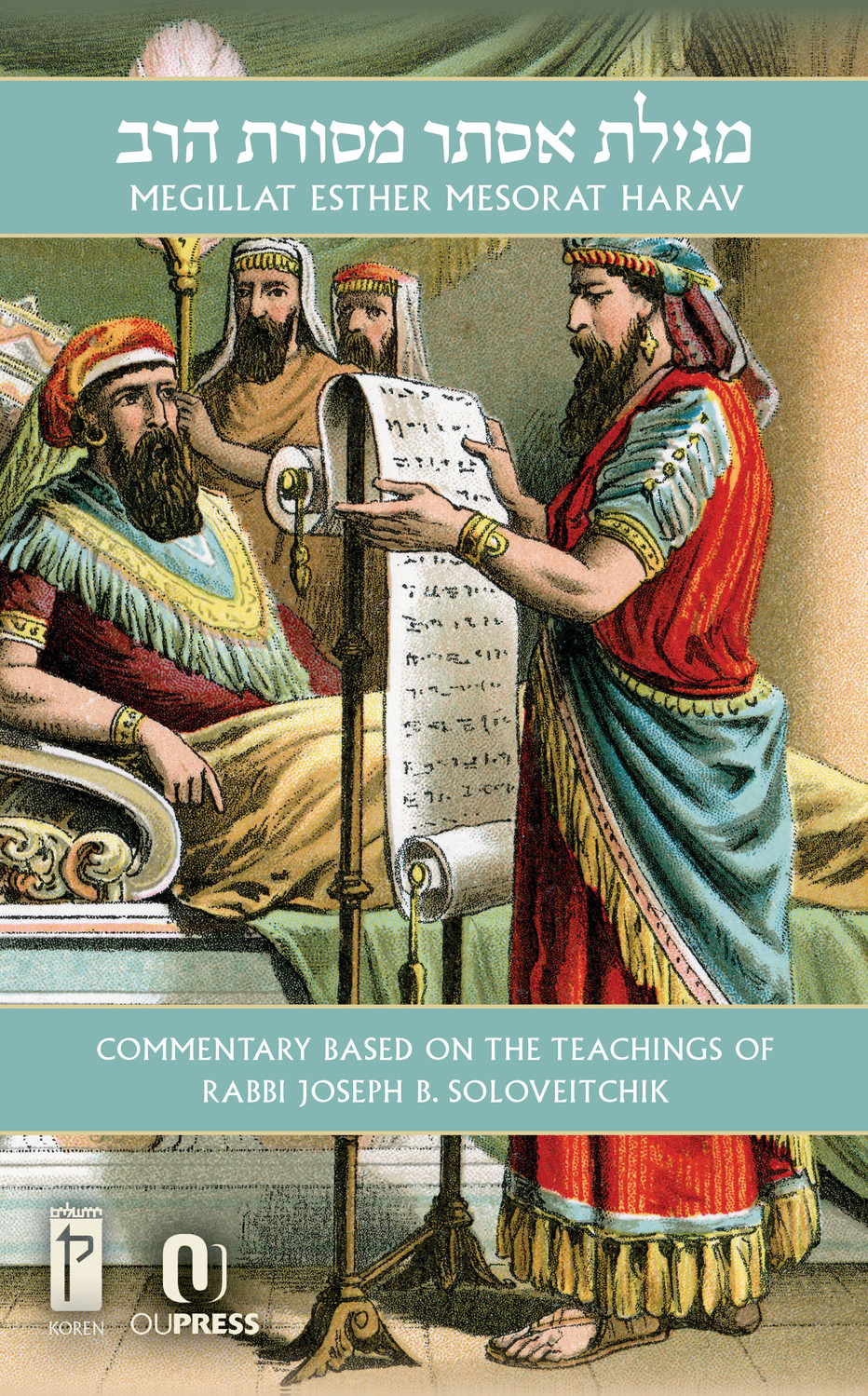 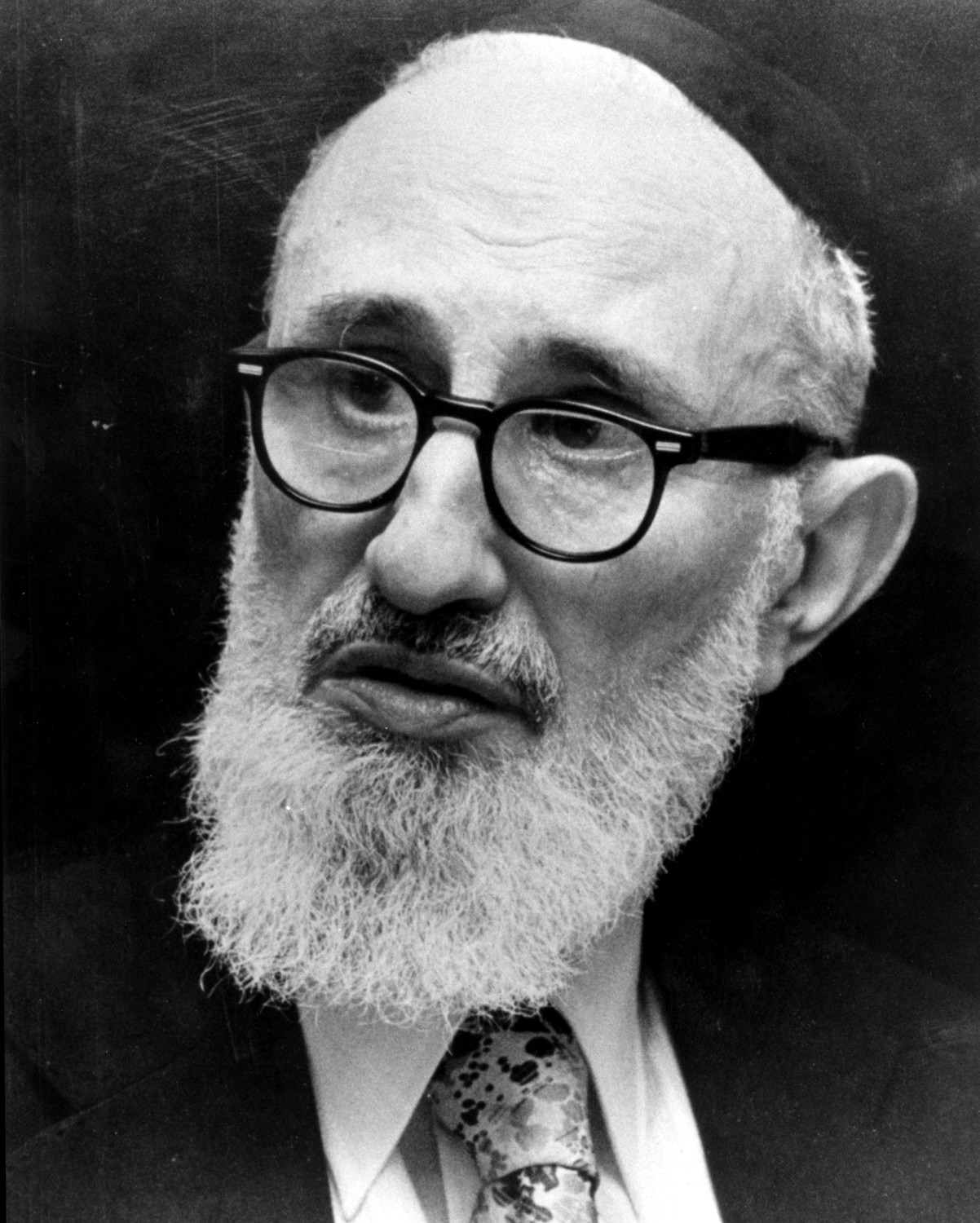 The Rav
Previous Next
By Alan Jay Gerber

Just in time for Purim, Megillat Esther Mesorat HaRav, published by OU Press and Koren Publishers, is a welcome addition to the literature about Megillat Esther. The book contains, alongside the text of Megillat Esther and the Maariv service for Purim, a running commentary drawn from the teachings of the Rav (Rabbi Joseph B. Soloveitchik), collected from a variety of published writings, notes and lectures. In addition, the volume also includes a section of Reshimot, with more extensive halachic analyses based on the Rav’s learning, and a derasha by the Rav on the nature of Purim.

The Rav, whose dazzling brilliance and profound philosophical insight left an enduring impact on Jewry in America and around the world, finds in the Megillah not only a story of political intrigue but a timeless drama of Jewish, and indeed human, existence. Taking note of the political, social and cultural setting of the events of the Megillah, the Rav asks how it was possible that the pluralistic Persian society, which accepted the Jews and many other nationalities, suddenly decided to commit genocide. The Rav sees the answer in Judaism’s view of the duality of man.

The answer to this riddle can be found in our philosophy of man as a dual, dichotomous being, burdened with an inner contradiction. On the one hand, Judaism looks upon man with a sympathetic, appreciative eye —with admiration. Time and again, Judaism expresses faith in man and belief in human uniqueness, in man’s royal status, in his contemplative, meditative power. On the other hand, Judaism has also treated man with extreme caution, even suspicion.

The Judaic skepticism concerning man is due to our historical experience and memory — that man, though endowed with divine rationality, may turn at a moment’s notice into either a non-rational or an irrational being. In the opinion of Judaism, there is no element of surprise in man’s abrupt changes and transformations; his unpredictability is a part of his humanity, and I would say that his unpredictability is quite predictable.

Another example of the Rav’s insight is his focus on the importance of Esther’s role as a woman and the significance that Judaism accords to women. With a prescient sense of some of the issues that are roiling our own society, the Rav has this to say about the episode with Vashti:

Ahasuerus did not grasp the meaning of human dignity in general and the dignity of the woman in particular. Judaism displays enormous sensitivity vis-a–vis the woman, particularly when she is put on exhibit as a sex object whose task is to gratify man’s brutish drives. Many Jewish laws pertaining to separation serve one objective, namely to convince man that woman is of equal worth. Quite often I have the impression that the Torah considered woman of a higher existential caliber than man.

Another intriguing theme considered by the Rav is that the events of the Megillah occur after prophecy passed from the scene. G-d, as it were, has gone into hiding, and we experienced hester panim:

The Megilla contains the story of events that occurred in the twilight hour of Jewish history. At that time, the covenantal community was losing, slowly but surely, the most precious of all gifts: prophecy. … “Where is there an allusion to Esther in the Pentateuch?” asks the Talmud (Hullin 139b). The answer is given immediately: “And I shall hide (haster astir) My countenance on that day” (Deut. 31:18). What did the Talmud mean to express by this question and answer? …

Where is there in the Torah an allusion to the silent, mute confrontation between mighty historical events and the Jew in the Diaspora, between a wicked, cruel monster and a lonely Jewish maiden on whose frail shoulders Providence placed the heavy load of historical responsibility? How can the Jew triumph over his adversaries and enemies if G-d has stopped speaking to him, if the cryptic messages he receives remain unintelligible and incomprehensible? The answer to this question is more a statement of facts than an explanation.

Even during the non-prophetic era, at a time when the divine countenance is hidden (hester panim), man is elected by G-d to carry on, to make decisions, to undertake difficult tasks courageously and implement them superbly. Of course, it is a superhuman task for a young, inexperienced maiden. However, the spirit of G-d will descend on her and inspire her to defy danger and to make the right decisions. G-d asks of man to reach maturity and independence. He wills man to act with courage and wisdom, allegedly as his own master. “This song shall answer” (Deut. 31:21); the song of the Torah will never be terminated. All communities, prophetic and non-prophetic, will join in.

These and many other themes are treated by the Rav with his inimitable depth and eloquence. Megillat Esther Mesorat HaRav is destined to grace many a library, both as an original perspective on the Purim holiday and as part of the growing body of the Rav’s works published by OU Press.