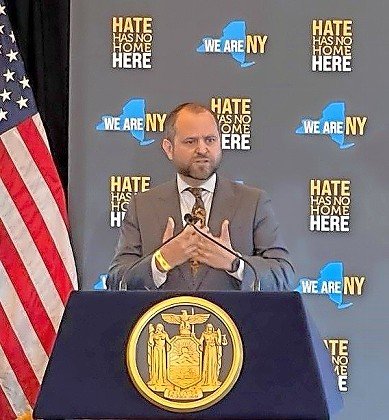 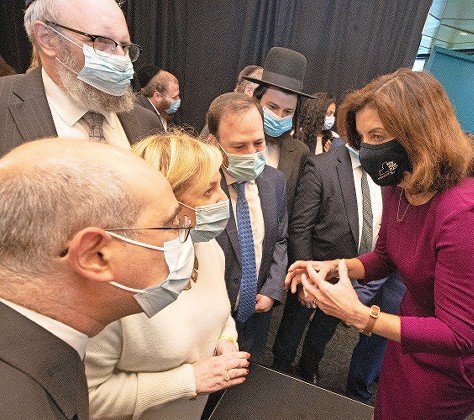 Governor Kathy Hochul speaks with participants at last week’s event at the Museum of Jewish Heritage in Lower Manhattan.
Don Pollard
Previous Next

The governor was introduced at the event by Orthodox Union Managing Director of Public Affairs Maury Litwack, who called her “an incredible leader, public servant and voice for the voiceless [who] has always spoken up loudly and proudly against anti-Semitism.”

Litwack underscored Hochul’s deep understanding of the issue by sharing a story about bringing her to Yeshiva Darchei Torah in Far Rockaway six months ago. As lieutenant governor at the time, she listened to two middle school students share their fears of being attacked because they were Jewish. Hochul reassured them their safety was her top priority and that hate would not be tolerated in New York.

The state is allocating $25 million — in addition to 872 grants totalling $43 million — to 362 nonprofits at risk of hate attacks, to boost their security.

“I don’t want a single New Yorker to ever, ever have the fear that’s in the heart of too many people from our Jewish community, our Asian community, our African-American community or any other community that feels they have been under siege,” she said. “We are going to take a very strong stand.”

Teach NYS, a nonpartisan project of the OU that advocates for government funding for the state’s nonpublic schools, praised Hochul’s action that will benefit 362 Jewish and other nonpublic day schools, houses of worship, summer camps and an array of other nonprofits through the state’s Securing Communities Against Hate Crimes grant program.

Hochul’s announcement came amid an ongoing nationwide surge in attacks against Jews and other groups targeted for their ideology, race or beliefs. A recent FBI report found anti-Semitic attacks account for 57 percent of all religiously motivated hate crimes in the United States.

OU President Mark (Moishe) Bane of Lawrence praised Hochul “for her unflinching commitment to fighting the ongoing scourge of attacks on Jews and other such violence across New York State. Since becoming governor of New York just six weeks ago, Gov. Hochul has demonstrated immense leadership in tackling this ancient hatred and speaking forcefully against those who seek to harm our community.”

Rabbi Yeruchim Silber, director of government relations for Agudath Israel of America, said “we commend Gov. Hochul for her forceful actions today. These funds will with G-do›s help, go a long way in protecting our vulnerable institutions.»

UJA-Federation of New York CEO Eric S. Goldstein said the state funds “will significantly enhance the welfare and safety of all New Yorkers.”

“Over the past couple of years, we’ve been trying to get some of these funds prioritized, and while we have worked with my assembly colleagues … [and] we have been successful in expanding eligibility criteria — for example, the inclusion of summer camps — the funds were never released,” observed Assemblyman Simcha Eichenstein of Boro Park. “But Gov. Hockul has been in office just a couple of weeks, and you have managed to get the funds out the door. You have prioritized security.”

Teach NYS and its coalition partners began working in 2017 to help craft and press for the implementation of the Securing Communities Against Hate Crimes grant program, which provides individual institutions grants of up to $50,000 apiece. New York previously awarded two rounds of funding: $14 million in 2017–18, which funded 280 grants, and $11 million in 2018–19, which funded 220 grants.

Teach NYS and its parent Teach Coalition have long made increased security a top priority. In 2013, Teach NYS helped create the first statewide security program in New York, as part of the SAFE ACT; in 2016, Teach NYS led a coalition in New York City to pass the first nonpublic school security guard program.