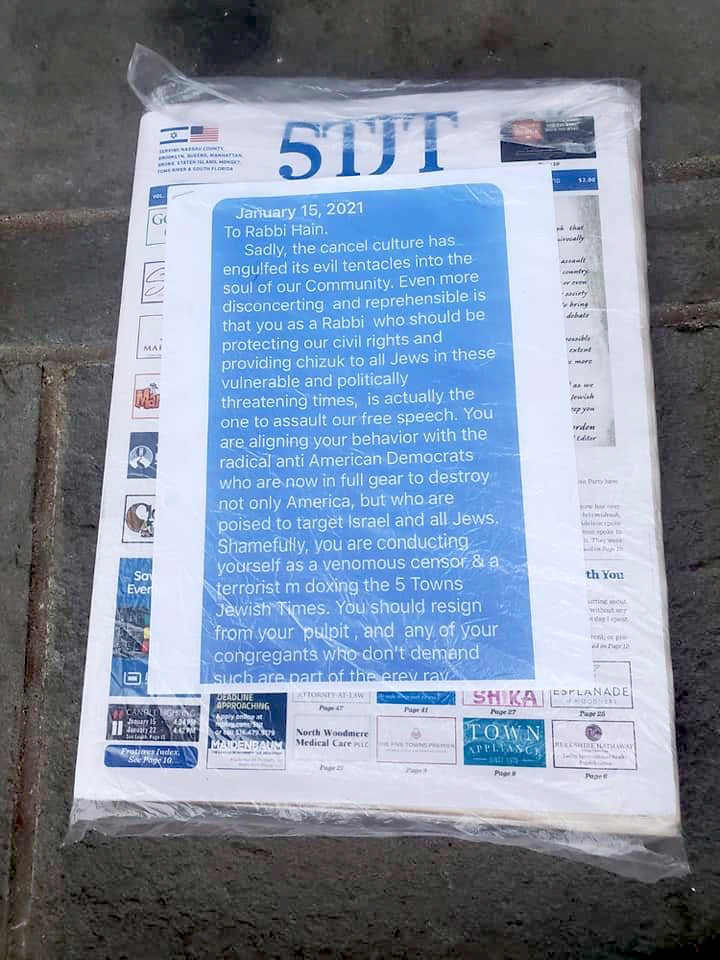 The cover of a threatening note left at Rabbi Kenneth Hain’s home in Lawrence, with a bundle of 5TJT papers.
Courtesy Herald Community Newspapers 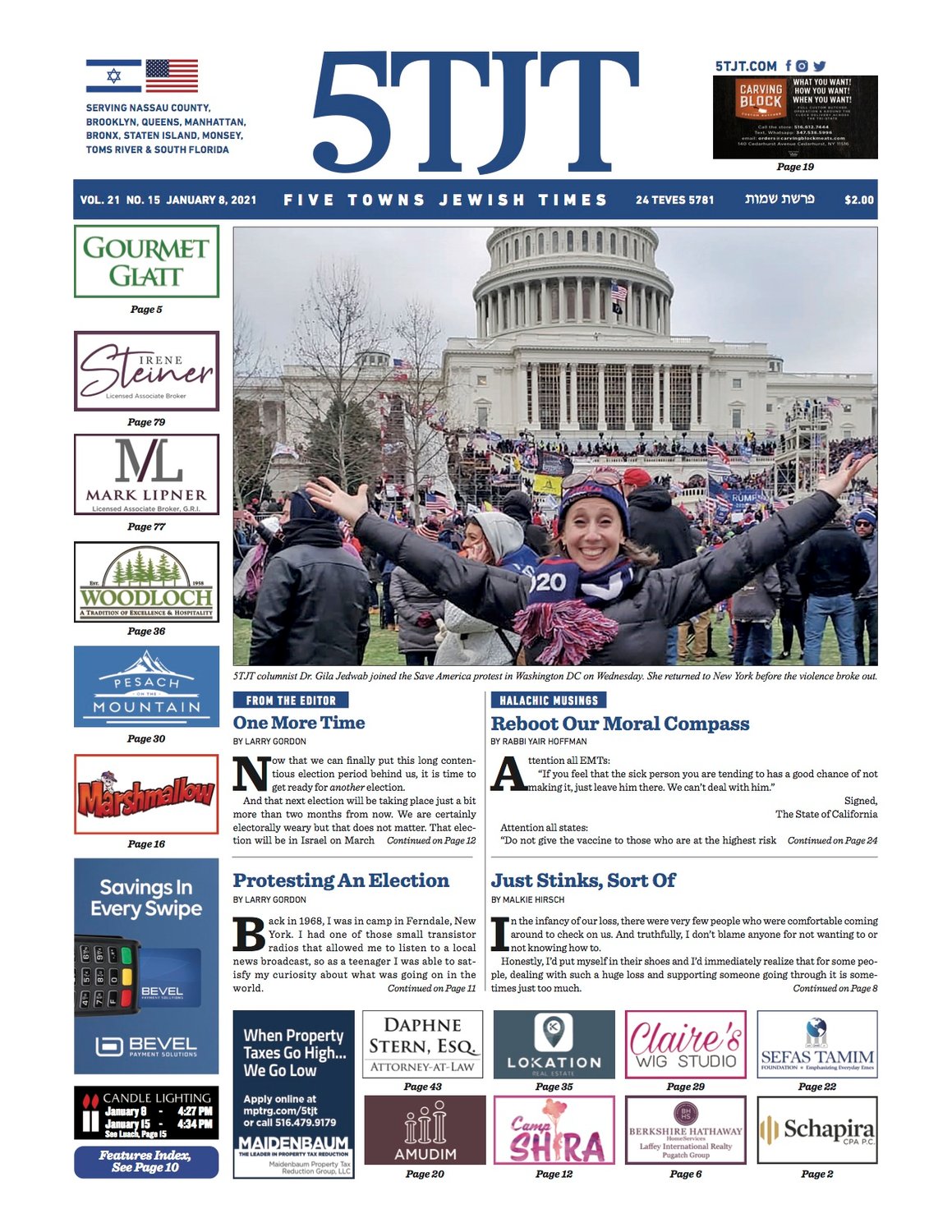 The 5TJT cover celebrating the Jan. 6 day of insurrection, featuring a smiling Dr. Gila Jedwab, outside the Capitol.
Previous Next
By Jeffrey Bessen, Herald Community Newspapers

A lengthy, threatening note slipped into a package of Five Towns Jewish Times newspapers was left on the doorstep of Rabbi Kenneth Hain’s Lawrence home last Friday. It called Rabbi Hain a kapo and anti-American, said he protects people “who have spewed hatred towards all Jews, including yourself,” and demanded his resignation as spiritual leader of Congregation Beth Sholom.

Rabbi Hain had criticized the newspaper for publishing a cover photo of a beaming Five Towns dentist, Dr. Gila Jedwab, in front of the US Capitol on Jan. 6, the day a deadly mob stormed the building. Together with Rabbi Avi Miller, shul President Barry Gurvitch and Board Chairman Alan Heller, Rabbi Hain signed a letter complaining that the front-page photo of was “irresponsible and reflects a disregard of our community’s values.” Jedwab claimed the photo was taken before the riot began, but Trump supporters can be seen on the inauguration bleachers behind her.

Both Beth Sholom, the oldest Orthodox shul in Nassau County, and the Young Israel of Woodmere, the largest Orthodox congregation on the South Shore, asked that the newspaper stop its deliveries to their facilities.

“We strongly object to your posting of Gila Jedwab with her arms extended in a welcoming fashion during the despicable event in front of the nation’s capital together with all its negative ramifications,” read the Young Israel’s letter, which was signed by its board president, Stuart Wagner.

There was opposition among 5TJT staff to publishing the photo of Jedwab, Gordon told Herald Community Newspapers. “It was made on deadline and it was breaking news. We had no idea of any type of violence. … In hindsight and clearly knowing how sensitive it was, I wouldn’t run it.”

Jedwab’s pro-Trump, COVID-denial and anti-vaccine columns in the 5TJT had earlier ignited a flurry of angry letters from some readers. Gordon said she was a guest columnist who wrote 10 or so columns. “She doesn’t work for us,” he said.

Rebbetzin Nancy Hain reported the threatening note to the Jewish Alliance for Dialogue and Engagement, a group that communicates with 130 members on WhatsApp. “We will secure the photo and other info sent to the local Rabbi to give [to] police for follow up investigation,” Nancy Hain posted. … This is being taken very seriously by the Shul, its security & us.” JADE group members later posted, “The Hain family knows who delivered the package on Friday and it is being addressed internally.”

5 Towns walks the line: 400 march peacefully thru Cedarhurst and Lawrence [with video]