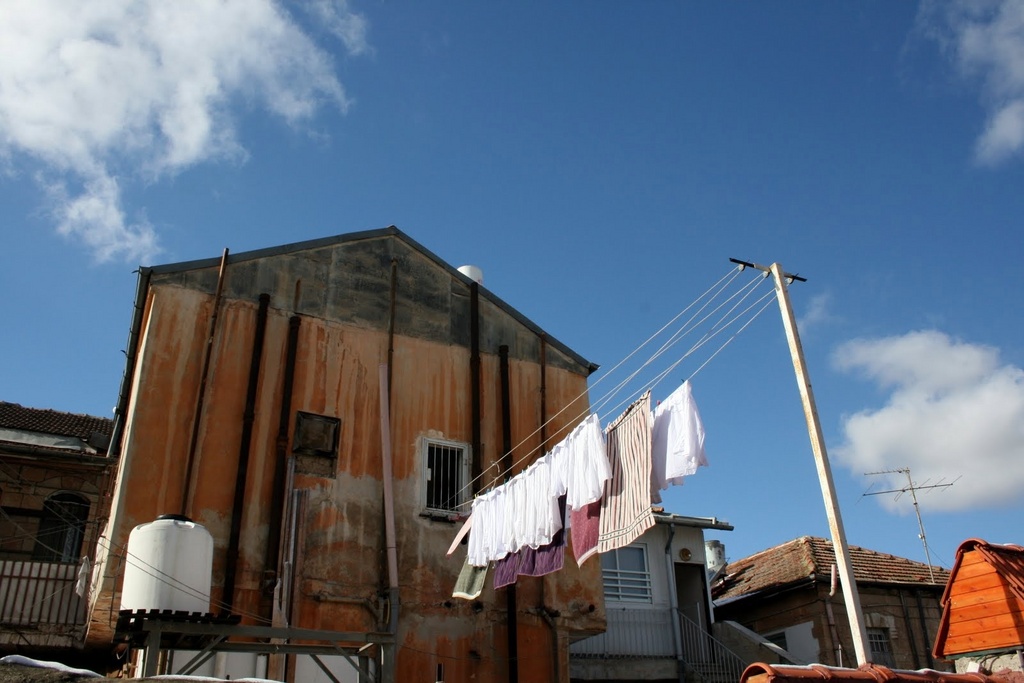 “Are you Americans?” An aged thin man in tattered clothing asked us.

My husband and I were standing in a narrow cobblestone street in Mea Shearim, peering through a basement window at an old-fashioned laundry. Freshly-washed white sheets were being fed into giant mechanical 100-year-old rolling machines, came out flat, and were then folded by waiting workers. We had never seen a laundry like this before.

“Are you Americans?’ The man asked again.

“Nyet. Parooskie, Parooskie,” my husband answered. My husband reasoned that beggars would walk away if they thought we were Russians. Russians were too poor to bother with. On the other hand, Israelis seemed to think that all Americans were rich, even humble American students like we were — who were celebrating our honeymoon by traveling the country with little more than a backpack, pitching a tent every night at a public park or beach. We had better not admit that we were Americans. The man in the tattered clothing wandered away.

We continued to meander through the narrow Mea Shearim streets. A well-dressed man approached us and asked: “Do you want to see the synagogue?”

We forgot to pretend that we were Russians, and agreed. The man led us to a dilapidated room, filled with posters of animals and broken benches, and one or two siddurs — clearly a scam. This could not be a synagogue. Orthodox Jews did not permit pictures of animals in a synagogue. The man asked us for money to fix the “synagogue.” We gave him an agora, roughly worth a penny, and ran away. He yelled after us that we didn’t give him enough.

We continued to wander. Suddenly, the thin man who had approached us at the old laundry was in front of us.

He laughed some more, and then asked us: “Where are you staying tonight?”

In the municipal park, in our tent, we told him. We had spent the previous night the same way, with no problem. In the middle of the night, an Israeli soldier had woken us to chat. The soldier told my husband, “I’ll tell you what. Tonight, I’ll stand guard over you and your wife while you sleep in the tent. Tomorrow night, I’ll bring my wife here to sleep in the tent, and you can stand guard over us.”

The thin aged man shook his head. “You don’t have to stay in a tent. Tonight, you can stay with me. I live right nearby. My wife doesn’t mind.”

We hesitated, and he told us about himself. His name was Moshe Frishtik, and he fought in the Warsaw Ghetto uprising. He had a son, who lived somewhere in the south of Israel. We decided to accept his invitation.

Moshe led us to his apartment. Narrow stone steps led up to desolate rooms. The floors and walls were rough, bare stone. The windows had no panes. The rooms were almost empty of any furnishing. The only item in the living room was a shabby Israeli pull-out sofa bed. The kitchen consisted of a small, creaky old table, two chairs, a sink, and a hot plate. The bathroom was a tiny broom closet with a pull-cord toilet. There was no food in sight, no clothing, no tablecloth, none of the amenities one usually finds in a home, with one exception: small silver candlesticks for the Sabbath sat on the kitchen windowsill.

Moshe told us to wait; he wanted to go out for a little while. He ran out of the apartment, leaving us alone. How trusting, we thought. We were total strangers. We could have easily walked off with his one valuable possession, the silver candlesticks.

A few minutes later, Mrs. Frishtik appeared. She was short and a little plump, wearing a frayed dress and a careworn look about her. She didn’t seem surprised to see us. I spoke to her with my broken Hebrew, looking up words in my pocket dictionary.

About a half-hour later, Moshe returned. To our surprise, he had just bought the most beautiful green grapes for us. My husband and I marveled as we ate them. We had never tasted anything so delicious. How could Moshe afford this, when he couldn’t afford a decent shirt?

Later, I took out my portable toothbrush and asked if I could brush my teeth at the kitchen sink, because there was no sink in the bathroom. Mrs. Frishtik looked at the toothbrush, amazed, wondering what it was. She did not own a toothbrush.

We slept that night on the old sofa bed. Mosquitoes flew through the empty, unscreened windows and ate us alive. But it still felt special to be the guest of a man who shared more than he had with us.

The next morning, Moshe wrote his name and address in my pocket Hebrew-English dictionary, using a tiny, difficult-to-hold pen- refill stick since he did not own a pen.

“Please let me know if you ever need anything,” he told us. “You can stay here again. You don’t have to stay in a tent.”

Moved by his poverty and generosity, we wanted to do something for him. We emptied our wallets and gave him the $50 of Israeli lirot that we had.

Moshe was overwhelmed. “Are you sure you’ll be okay?” He asked us.

“Nyet. Pa-rooskie, pa-rooskie,” he said, laughing, and then asked us over and over if we would be okay, and whether we could really get along without the money we had given him.

“Your marriage will be very blessed,” he told us as we left. “Don’t forget. You can always stay here with me.”

Later that day, we sat in a park in Jerusalem. Some Arab children asked us for money, and grabbed my dictionary. They threatened to keep it unless we gave them what they wanted. One of the children opened up the dictionary and saw the name, Moshe Frishtik, and started laughing. “That’s your name, Moshe Frishtik! What a silly name!” We told them that all we had was an agora, and they threw down the dictionary and ran away.

I often thought about Moshe, and wondered whether he was still alive, sharing his home with total strangers who he found wandering the cobblestone streets of Mea Shearim. Although my marriage ended in divorce, Moshe was right that it was blessed — I have three beautiful children who have the kind of hearts that lead a person to buy delicious grapes for a guest when they have little for themselves.

Editorial: A Battle between modern and medievalism

Opinion Little Israel, the root of all the woes in the world, so Obama stays away

A Minority with the Perception of a Majority