McCullough got it wrong about Truman and Jews 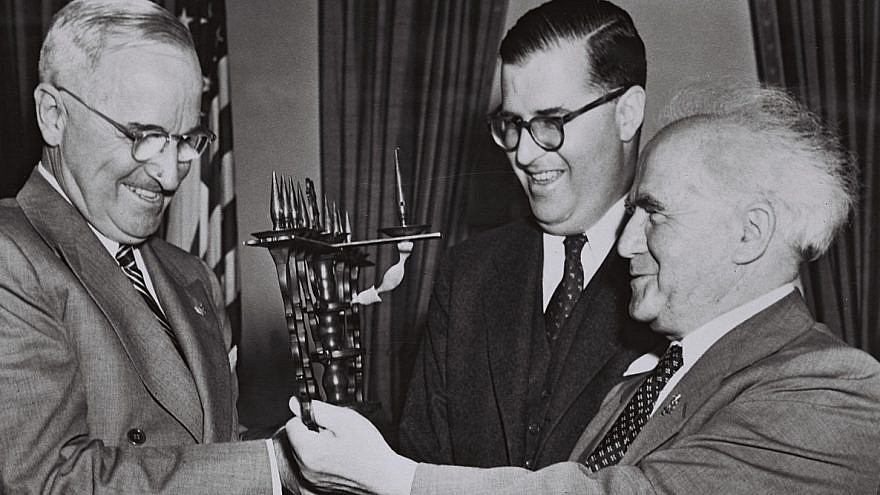 President Harry Truman accepts a menorah from Israeli Prime Minister David Ben Gurion, accompanied by Israeli Ambassador to the US Abba Evan, during Ben Gurion's visit to the United States.

Even Pulitzer Prize winners can sometimes make mistakes — serious ones.”
By Rafael Medoff

Historian David McCullough won a Pulitzer Prize for “Truman,” his biography of President Harry S. Truman. McCullough also won a second Pulitzer and two National Book Awards for his other books. He even was awarded a Presidential Medal of Freedom.

Yet despite his many awards and accolades, McCullough, who passed away on Aug. 7, got it all wrong when it came to a crucial episode in the history of President Truman’s policies regarding the creation of the State of Israel.

The story concerns Rabbi Dr. Abba Hillel Silver, the dynamic co-leader of the American Zionist movement in the 1940s, along with Rabbi Stephen S. Wise. Rabbi Silver mobilized Zionist activists nationwide — Christians as well as Jews — to take part in a massive campaign of rallies, lobbying, petitions and other protests urging President Truman to support the establishment of a Jewish state in Palestine.

Truman deeply resented the pressure, and since Silver was its primary instigator, the president disliked him — intensely. In one handwritten note to an aide in 1946, Truman blamed “terror and Silver” as “the causes of some, if not all, of our troubles.” (By “terror,” he was referring to the Jewish underground militias that were attacking British targets in Palestine.)

It should be noted that President Truman spoke just as harshly about broad swaths of the American Jewish community, not just Silver. For example, in the midst of a July 30, 1946 cabinet discussion about American Jewish dissatisfaction over his Palestine policy, Truman exploded, “Jesus Christ couldn’t please them when he was here on earth, so how could anyone expect that I would have any luck?” McCullough himself characterized Truman as “short-tempered.”

Nonetheless, according to McCullough’s biography of Truman (pp.598-599), it was Silver’s intemperate demeanor that helped provoke the president’s anger at the American Zionist movement: “Particularly offensive to Truman was the attitude of Rabbi Abba Hillel Silver. … At one point during a meeting in Truman’s office, Silver had hammered on Truman’s desk and shouted at him.”

This anecdote shows up in many books and articles about the period. It is often cited as evidence that the obnoxious, belligerent Silver — as the face of obnoxious, belligerent American Jews in general — endangered the entire Zionist enterprise through his outrageous attempt to intimidate the president of the United States. The story is presented as an indictment not only of Silver the man, but of the very idea of forthright Jewish political behavior.

The claim that Silver pounded on the president’s desk and yelled at him always struck me as implausible. Rabbi Silver was a passionate man, but he knew how to comport himself in meetings with the president of the United States and other government officials.

Sure enough, my investigation of the source for the alleged incident quickly raised more questions than it answered. McCullough’s sole source was the aforementioned “terror and Silver” memo, which does not mention any fist-pounding or yelling.

So I checked Truman’s daily calendar to see when the alleged incident might have taken place. Silver visited the White House just twice during Truman’s presidency, on Sept. 29, 1945, and July 2, 1946. But he did not go by himself. Silver was accompanied by Stephen Wise on the first visit, and by Wise, as well as Zionist officials Nahum Goldmann and Louis Lipsky, on the second. Meaning that if Silver had indeed “hammered” on the president’s desk and screamed at him on either occasion, there would have been eyewitnesses.

It happens that Wise, Goldmann and Lipsky were bitter rivals of Silver. Surely they would have mentioned an incident that would have vindicated their view of him. Yet their autobiographies, published letters, and private correspondence say nothing on the subject. Goldmann, in his memoir, did assert of Silver that “there was something of the terrorist in his manner and bearing.” But he did not mention any fist-pounding to illustrate Silver’s supposedly terroristic nature. Nor, by the way, did President Truman mention it in his own published memoir.

Several other books which relate the alleged fist-pounding cite a different third-hand source: an obscure book (a history of a Kansas synagogue) that quoted Elinor Borenstine, the daughter of Truman’s Jewish friend and business partner, Eddie Jacobson.

So I telephoned Mrs. Borenstine for clarification. It turned out that she had been relying on a 1968 essay by her father, in which he reported that Truman once complained to him about “how disrespectful and how mean certain Jewish leaders had been to him.” Jacobson wrote nothing about any fist-pounding or shouting. In fact, he did he not mention Silver by name.

Interestingly, however, there is another anecdote from that period, based on a stronger source, that involves some “hammering” of fists — but it was Truman who was doing the hammering.

Syndicated columnist Drew Pearson, a widely respected investigative journalist, reported on March 10, 1948 that Truman had lost his temper during a recent conversation about Palestine with “a New York publisher.” (He was referring to Ted Thackrey of the New York Post.) Pearson wrote: “Pounding his desk, [Truman] used words that can’t be repeated about ‘the (blank) New York Jews.’ ‘They’re disloyal to their country. Disloyal!’ he cried.”

President Truman denied the story, but Pearson stood his ground. Is it possible that Truman, in his complaints to Eddie Jacobson or others about “disrespectful” Jewish behavior, was actually projecting something of his own intemperate ways?

Whatever the answer, one thing is clear: David McCullough got it all wrong.

His biography, “Truman,” was a best-seller. It won rave reviews. It was even made into an HBO movie. But McCullough’s careless accusation against an American Zionist leader, made without any documentation, reminds us that even Pulitzer Prize winners can sometimes make mistakes — serious ones.