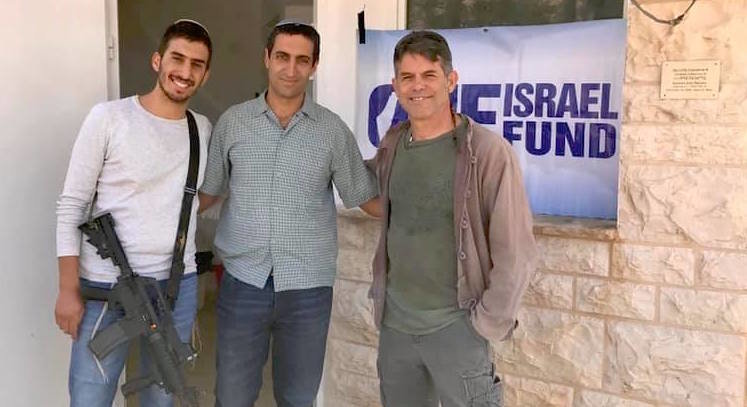 Marc Provisor (left), director of security projects for the One Israel Fund. 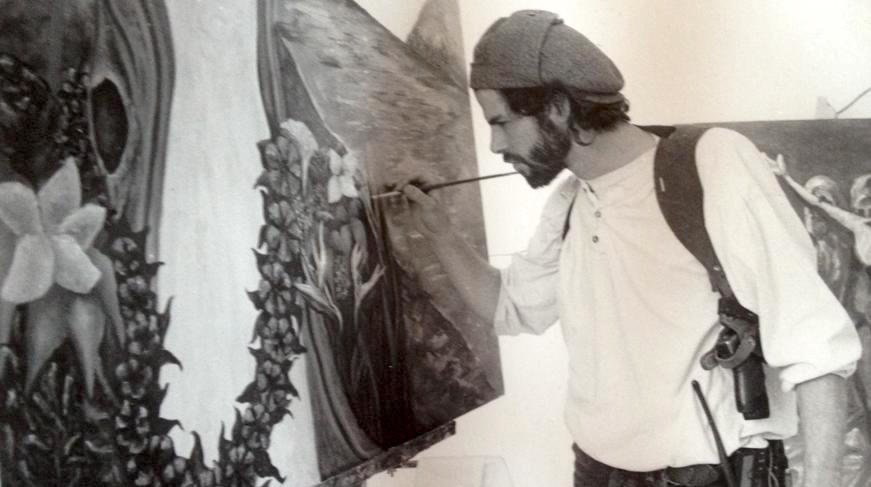 Marc Provisor pursuing art, his other passion.
Previous Next
By Josh Hasten, JNS

They used to call him the Israeli “Rambo.” But these days, dressed in modern attire and with a long braid in his hair, not many would recognize that Marc Provisor, current director of security projects for the One Israel Fund, has spent the past quarter-century working as one of Israel’s leading experts in combating terror, particularly thwarting attacks targeting Israeli communities in Judea and Samaria.

The rogue, “hippy” look complements Provisor’s real passion: the world of art. Sitting down with JNS recently in a Jerusalem cafe, Provisor, 57, shared how his life detoured from being an up-and-coming New York artist to being immersed in the world of Israeli counterterrorism.

After serving as an Israel Defense Forces’ Paratrooper in the First Lebanon War in 1982 and spending time in a counterterror unit, Provisor, who had immigrated to Israel with his family in 1978 at the age of 15, decided to take a break from it all. Like many Israelis after the army, he chose to travel and ended up in New York City, where he decided to pursue his love of art.

But in January 1991, Provisor’s focus changed when Iraqi President Saddam Hussein began launching Scud missiles at the Jewish state. “My country was being attacked, and I didn’t feel comfortable being away,” he says. “I was in the middle of a show with art pieces in a museum, but I would watch the news and just couldn’t take it.”

In 1994, he and his wife picked up and moved to Shiloh in the hills of Samaria. Provisor says he wanted to escape city life, but also saw the community as a place that embodied “strong Zionist Jewish values” and was a good place to raise children (they have four, now grown).

After the mayor heard about Provisor’s role in the army fighting terror, he offered him the job of town security chief, downplaying the role by telling him it would be a few hours of work a day.

The security situation was very different at the time, recalls Provisor. “It wasn’t as tense. But I started investing time in the job, making changes.”

He says it used to be that if an incident took place outside the community, it was not within the jurisdiction of the internal security personnel to get involved. But he also says, “I never felt that if a Jew was getting hurt, I could just sit back, so I started leaving the community and was often the first to arrive at an incident.”

Back then, he says it was either a traffic accident or Arabs throwing rocks or Molotov cocktails at Israeli cars, as they had been doing since the First Intifada that began in the late 1980s.

Overall, Provisor acknowledges that there were good relationships between Jews and Arabs in the area until, he notes, that “overnight, it collapsed.” That was the year 2000, when everything changed with the launch of the Second Intifada by PLO leader Yasser Arafat.

“All of a sudden, we were dealing with one or two shootings every day. There were terror shootings on the roads, shots into our communities. There was a whole new dynamic towards the Arabs,” he relates. “New strategies had to be developed overnight. The country wasn’t ready for it, communities weren’t ready for it. It was nightmarish.”

As bad as it was, Provisor describes that period — from 2000 until 2005 — as “my professor” in the realm of learning how to prevent terror. It was “every possible nightmare, dealing with shooting attacks, IEDs, attempted kidnappings. It was a very tough period; we had to deal with a lot of violence, a lot of death, but it was the best learning experience in dealing with terror.”

As the intifada eventually dwindled, Provisor left his post in Shiloh in 2006 and became a private consultant helping a wide number of security bodies in Israel and abroad with emergency and crisis management, and risk assessment. He was even hired as a consultant by the U.S. Department of Homeland Security.

It was during that period in 2008 that leaders of the One Israel Fund Organization, who had heard Provisor address their groups on visits to Shiloh years before, approached him with an opportunity to become their director of security projects. One Israel is a nonprofit organization whose mission per their website is “supporting the welfare and safety of the men, women and children of Judea, Samaria and the Jordan Valley.”

Provisor’s new responsibilities included assessing the security needs of communities in Judea and Samaria, working with security personnel to find the proper solutions to keep the residents safe. He says that the key to securing an area “is to look at it from an enemy’s point of view and assess weaknesses,” then working on fixing them.

“I would buy equipment and load up my jeep, and arrive at the communities and show them what I brought. They started calling me ‘Santa Claus.’ I knew what they needed because I was one of them and that made the connection better,” he says.

Daniel Hanson, security director in the Gush Etzion region, tells JNS that over the past few years, technology and security equipment have developed and advanced. “Unfortunately,” he says, “the annual budget has remained the same, not allowing us to purchase these things. Then along comes Marc Provisor from One Israel Fund and explains to us how, yet again, he has managed to find a donor for a much-needed project and asks us, ‘How many? How urgent?’ ”

In fact, after learning about Provisor’s support for communities in Judea and Samaria, One Israel started getting calls from communities on Israel’s border with Gaza in the south, asking if he could come and help fill the gaps in their security needs as well.

When Ze’ev Etzion, who served as the security head of Kibbutz Nirim, was killed in a mortar attack fired by terrorists in Gaza during 2014’s “Operation Protective Edge,” Provisor used his friend’s death as the inspiration in designing a new bulletproof vest for security chiefs. “We made 300 vests, and the army copied our design, producing 4,000 to supply to first-response teams,” he says.

Recently, communities situated on the northern border with Lebanon have reached out asking for help facing the potential threat of rocket fire and terror tunnels from Hezbollah.

When Provisor isn’t driving around Israel assessing or delivering equipment, he is abroad speaking on behalf of One Israel, drawing potential donors to projects he knows will save lives.

Scott M. Feltman, executive vice president for One Israel Fund, has only praise for Provisor’s work. He tells JNS that “as far as I’m concerned, Marc Provisor is the most gifted and knowledgeable expert in counterterror for the yishuvim (‘communities’) of Judea and Samaria. He takes an enormous amount of time getting to know each one’s security situation and helps devise a strategy to protect them. He is also uniquely qualified to speak to an Anglo audience in order to raise the funds to pay for the equipment and training necessary for filling in the gaps between what the government, army and individual communities can afford, and the small but imperative extras that often spell the difference between life and death.”

While Provisor works with One Israel full-time, he has found the time to return to painting. With a showing of artwork coming up later this month in London, he says that being in both worlds has made for some “interesting discussions” on how the fields often mesh.

He adds that “whether in art or security, it’s all about seeing the big picture. It’s seeing the positive and negative spaces, the light and shades of places. Security is a spectrum, and counterterror is one of most creative aspects in all of security. And so, what happens is that when you have to come up with a solution, you have to look outside of the box. You have a creative solution creating a security solution; it’s like creating a painting.”