'deal of the century' 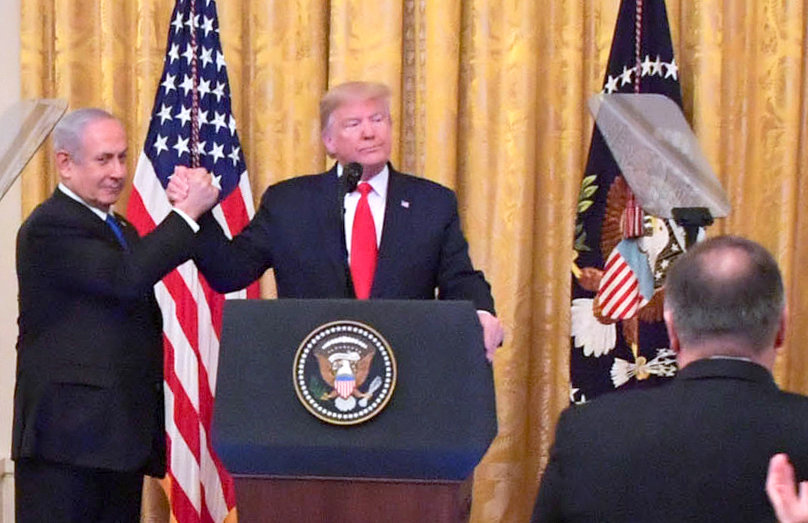 President Donald Trump and Israeli prime minister Benjamin Netanyahu at the White House following Trump's unveiling of the US Peace Plan on Jan. 28.
Kobi Gideon / GPO
By Josefin Dolsten of JTA and other sources

Reactions to President Donald Trump’s Israeli-Palestinian peace plan unveiled Tuesday took a predictable path, with Jewish groups on the right praising the much-anticipated proposal and those on the left criticizing it.

The proposal, which Trump presented at a news conference with Israeli Prime Minister Benjamin Netanyahu, would allow Israel to “apply its laws” to the Jordan Valley and parts of the West Bank while freezing for four years the areas that the U.S. proposes as part of a future Palestinian state. A Palestinian state would be made up of Gaza and the majority of the West Bank, which would be connected via high-speed rail, and have East Jerusalem as its capital.

Israel would also get “overriding security responsibility and control over entire territory from the Jordan River to the Mediterranean Sea,” U.S. Ambassador to Israel David Friedman said in a follow-up call with reporters. The White House released a 180-page document that elaborated on the details of the plan.

Here’s what Jewish groups have to say about the proposal. (As additional reaction is posted, this story will be updated online. Last updated Jan 29 at 2 pm.)

Those that are upbeat…

•The OU and the RCA, in a joint statement, noted that the leaders of both of Israel's major political parties supported President Trump’s plan and that's it's been the "longstanding policy position" of the OU and RCA "that decisions about Israel’s security needs and challenges are to be made by the people of Israel through their democratically elected government." They urged Palestinians to "forego the path of violence, boycotts and the criminalization of differences at international forums and return to peace talks with Israel."

•ZOA issued a 30 point statement that praised "certain aspects" of the plan. "ZOA wants to remind everyone that the Palestinian-Arabs have rejected very generous offers for a Palestinian Arab state in 1937, 1947, 2000, 2001, 2008 and 2014, and never made a counter-offer," the statement concludes. Click here to read it all.

•Agudath Israel of America said Trump's plan "promises to lay a foundation for a meaningful path forward to the fulfillment of both Israeli and Palestinian aspirations." The group cautioned that "this framework is exactly that — a framework. … The end result might look different in some significant ways." And it reminded that "ultimately, we tur to the Almighty [to] inspire those who have been at war for so long to have the courage to end the hostility that has brought so much suffering and bloodshed to their peoples."

•The Republican Jewish Coalition endorsed the plan. Executive Director Matt Brooks said “[t]he President and his team have put together a bold and nuanced proposal that is deeply rooted in America’s core values of liberty, opportunity, and hope for the future.”

•The American Israel Public Affairs Committee said it “appreciate[s] the efforts of President Trump and his administration to work in consultation with the leaders of the two major Israeli political parties to set forth ideas to resolve the conflict in a way that recognizes our ally’s critical security needs.” AIPAC urged the “Palestinians to rejoin Israelis at the negotiating table.”

•StandWithUs CEO Roz Rothstein said the group “hope[s] this will be a step towards a better future for both peoples” and that “it is ultimately up to Israeli and Palestinian leaders to resolve their conflict through direct negotiations.”

•The Conference of Presidents of Major American Jewish Organizations said, “We saw today the fullest expression of the US-Israel relationship and America’s commitment to Israel’s long term security, fulfilling Palestinian aspirations, and to providing a lasting solution to the Palestinian-Israeli conflict.”

Those that are downbeat…

•J Street described it as “the logical culmination of repeated bad-faith steps this administration has taken to validate the agenda of the Israeli right, prevent the achievement of a viable, negotiated two-state solution and ensure that Israel’s illegal occupation of Palestinian territory in the West Bank becomes permanent.”

•Peace Now said “[t]he insistence of a small and extreme minority to cling to every piece of land is dragging our country to perpetuate this protracted conflict to the point that it is critically threatening Israel’s character as a Jewish and democratic state.”

•New Israel Fund CEO Daniel Sokatch said the proposal “threatens to make the occupation permanent” and “is not the vision of Israel’s founders.”

•IfNotNow co-founder Emily Mayer slammed the plan as “totally and utterly bankrupt,” saying it “reveals the shameful way that our government has catered to the Israeli right — at the cost of Palestinian freedom — for our entire lives.”

•Jewish Voice for Peace acting co-executive director Alissa Wise called it “an apartheid plan” and “a distraction ploy by two warmongers who are prioritizing their personal election campaigns over any semblance of statecraft.”

•The Israel Policy Forum criticized the plan “as an annexation roadmap [that] discard[s] long-held assumptions about how the conflict will be resolved. It was constructed with only the input of one party, Israel, making it a fait accompli that the Palestinians would not consider it.”