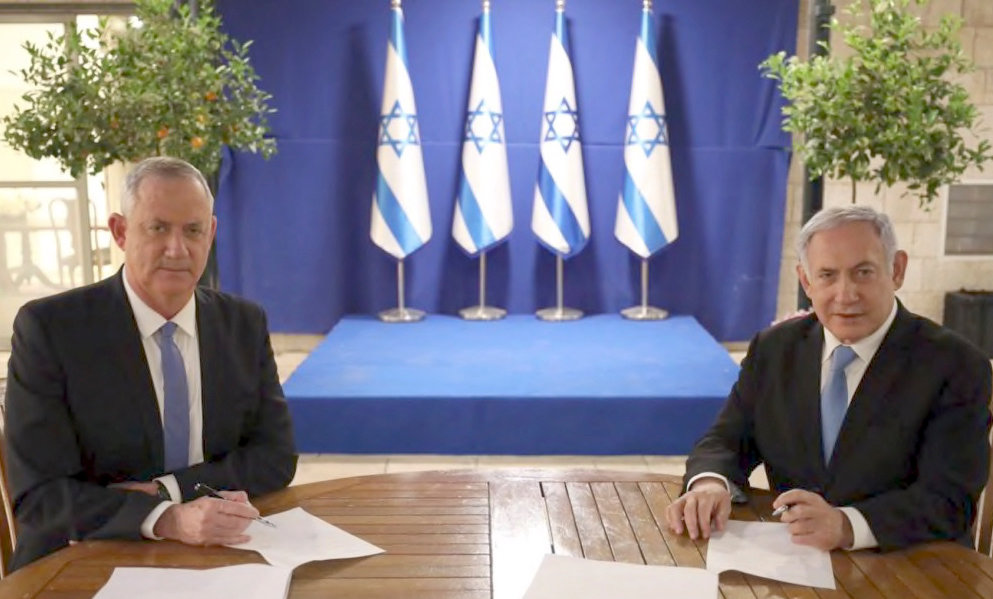 After a protracted battle across three successive national elections and several weeks into an extended coronavirus crisis, Israel’s political stalemate ended anticlimactically on the eve of Yom Hashoah, Israel’s annual Holocaust Remembrance Day, with the formation of a national emergency government.

The agreement was signed Monday between Prime Minister Benjamin Netanyahu and challenger Benny Gantz after weeks of tense negotiations. It brings the political rivals into the same coalition government and averts a costly fourth election that had been tentatively scheduled for later this year.

The unity alignment finally cements Netanyahu’s electoral victory, as the embattled prime minister is now widely expected to add another year and a half to his terms that have already run 11 consecutive years and 14 years in total.

Knesset Member Yariv Levin, who led Likud’s negotiating team, said that “a national emergency government is the right and logical thing at this time,” and explained that unity is necessary to “address the economic and health challenges that are facing us.” Levin is expected to be appointed Knesset Speaker.

“I congratulate the prime minister and MK Benny Gantz on the important agreements they reached, and am convinced that together we can lead Israel towards a better future,” he said.

As part of the arrangement, Netanyahu will remain prime minister for the next 18 months, with Gantz serving as defense minister and vice prime minister, after which Gantz will assume the nation’s top post with Netanyahu serving as vice prime minister. The two opposing parties will split portfolios in an excessively large and expensive 36-member cabinet, stretched to satisfy the outsized ministerial demands of Gantz’s political camp.

In addition to Netanyahu’s Likud Party — by far the largest faction in the new coalition with 36 mandates — and Gantz’s half of the former Blue and White alliance with 17 mandates, the government will be joined by Israel’s two ultra-religious parties, Shas and United Torah Judaism totaling 16 seats, which back Netanyahu, as well as three small independent political factions — Labor, Gesher and Derech Eretz totaling 5 seats, which each supported Gantz in the third election.

The unity arrangement was facilitated by Gantz’s splitting of the larger Blue and White alliance that had challenged Netanyahu in the three successive polls.

Two factions, led by secularist Yair Lapid and hawkish former Defense Minister Moshe Ya’alon, respectively, chose to break ranks with Gantz and head to the opposition, where they will be joined by Netanyahu nemesis Avigdor Lieberman and his Russian Yisrael Beiteinu Party, the far-left Meretz faction and the larger Joint List of anti-Zionist Arab parties.

By forcing Gantz into dividing his large Blue and White alliance, Netanyahu cut his political opposition down to size.

Meretz MK Tamar Zandberg attacked Gantz for aligning with Netanyahu, stating that “the one who was supposed to be the ‘Prime Minister of Change’ chose to raise a white flag tonight.” She added that Gantz “sold the mandate we gave him,” and said that the new coalition “isn’t an emergency government but a government that poses an emergency to Israeli democracy.”

Meanwhile, the small right-wing Yamina Party, which has long supported Netanyahu and is led by outgoing Defense Minister Naftali Bennett, is weighing whether or not to join the government. The party will be forced to relinquish multiple ministerial portfolios in the new alignment and seems likely to have little influence over government policy, despite Netanyahu’s insistence that he will maintain the principles of his right-wing political bloc.

Even without Yamina, the national emergency government creates a large parliamentary majority, with at least 72 MKs out of 120. During the first six months, the government will focus on the continued public safety hazard and economic repercussions of the coronavirus crisis.

Netanyahu has received early praise for directing Israel’s response to the crisis in his capacity as transitional prime minister. Israel currently has one of the lowest fatality rates of any country since the start of the months-long outbreak.

Israel succeeded in preventing the rapid and uncontrollable spread of the virus by quickly enforcing restrictions on incoming flights from nearly all international destinations and imposing partial lockdowns across the country, as well as enforcing full lockdowns during the week-long Passover holiday. Additional efforts focused on the procurement of vital health and safety goods in short supply around the world, including coronavirus tests, ventilators, masks and protective gear, as well as chloroquine pills that may be used to treat COVID-19 symptoms.

In addition to managing all aspects of the crisis for its own citizens, the government is similarly girding for a potential large outbreak of the virus in Palestinian-controlled territories across Judea and Samaria and in Gaza.

The coalition agreement sets the stage for Israel to formally extend its sovereignty to significant tracts of land in Judea and Samaria, including all Jewish settlements and outposts, as well as the strategic Jordan Valley.

The step is expected to have the full backing of the United States as the first stage of the “Peace to Prosperity” vision recently presented by the Trump administration. Both Netanyahu and Gantz pledged their support for the Trump Mideast peace plan in meetings with the president in January.

With Netanyahu sitting just two seats short of a narrow right-wing coalition and Gantz far from creating an alternative left-wing government, the unity alliance represented the obvious, yet until now elusive, conclusion to a seemingly endless political battle that was taking its toll on a frustrated electorate.

Trials in three separate corruption cases against Netanyahu are scheduled to start in late May, following a two-month postponement due to the coronavirus outbreak, and may yet be further postponed in accordance with nationwide limits on private- and public-sector activities.

Immediately following the third election, Gantz had attempted to force Netanyahu out of office by forming a minority government with outside support from self-proclaimed anti-Zionist Arab legislators.

After the effort failed due to a lack of support from legislators within his own left-leaning political camp, Gantz attempted to wrestle a bare one-seat majority in the Knesset to advance personal legislation against Netanyahu in the absence of any formal coalition agreements. Yet his threats eventually proved empty as he opted to defect from his political allies and align instead with his political arch-enemy.

A former Israel Defense Forces chief of staff, Gantz—a first-time lawmaker—now will serve as a deputy under Netanyahu for a year and a half before assuming the premiership. The agreement stipulates that should Netanyahu try to collapse the government before the rotation kicks in, Gantz automatically becomes premier, and new elections cannot be held for a further six months.

The agreement does not stipulate what would happen if the coalition partners take a vote of “no confidence” after Gantz assumes power.

Meanwhile, after intense and bitter political posturing, the order of the day is unity, particularly during a difficult coronavirus crisis that is once again challenging the resolve of an already battle-tested nation.

At the start of Israel’s Holocaust Remembrance Day ceremony, Netanyahu stated that “the outbreak of the COVID-19 demonstrates the importance of national sovereignty. Unlike the Holocaust, this time we were able to identify the danger on time. We harnessed all state systems for the coronavirus fight.”

He added that “the lessons of the Holocaust require us to be vigilant. The threats of extermination have not dissipated in the coronavirus storm, and we always remain determined to respond.”

For at least the next 18 months, Netanyahu will be leading that response.

Alex Traiman is the managing director and Jerusalem bureau chief of JNS.