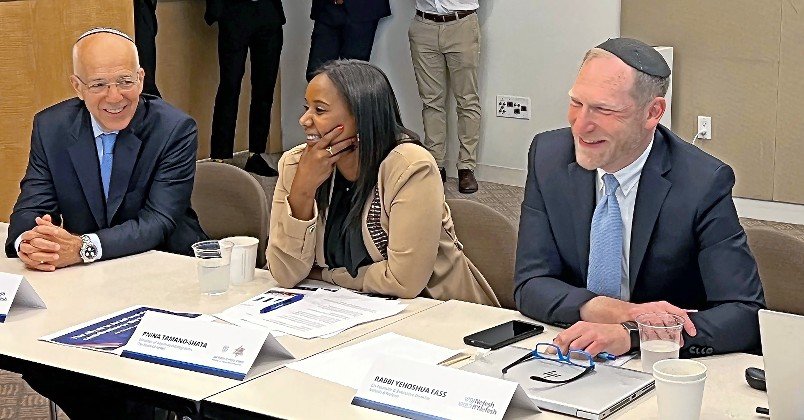 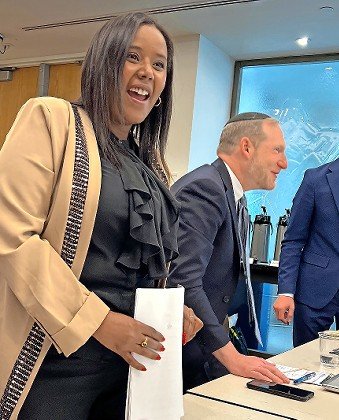 As record numbers of olim pour into the Jewish State, Israel is prepared to face the challenge of integrating them into Israeli society.

That’s the message delivered last week by Israel’s minister of aliyah and integration, Pnina Tamano-Shata, at a discussion with Jewish media hosted in Manhattan by Nefesh B’Nefesh (NBN).

“We built roads and houses and everything,” she said. “Our challenge now is to build a cohesive and strong society after we built a country for 74 years.”

Tamano-Shata relates personally to the oleh experience, having come to Israel as a young child from Ethiopia.

“What better person to know the problems, the issues, the good and the bad, than somebody who went through it,” said NBN Executive Director Rabbi Yehoshua Fass.

“Ethiopia is part of her heart, but so is France, and so is Ukraine and Bnei Menashe. Wherever they’re coming from, she’s really on top of it.”

Fass said his organization, which facilitates aliyah from North America, saw a 30 percent increase in traffic last year. His assessment is that this was due primarily to Corona and not to the rising frequency of anti-Semitic incidents.

References to anti-Semitism on aliyah applications  from North Americans “are outliers,” he said. “It’s not a trend that’s worth even reporting on.”

He said the “game changer” was the Corona-driven openness of employers to their teams working remotely, even from overseas.

He cited two other drivers — a growing comfort with  using technology to sustain family relationships at a distance, and a fresh consideration of personal “identity.”

Before the pandemic, “people were so fused with their community, with their synagogue, with their federation, they never had time to think about what they wanted,” Fass said.

“Sitting around the Shabbat table with your family and asking what’s our trajectory, what do we want to do with our lives, allowed people to really recalibrate their compass and want to move to Israel.”

Meanwhile, the success of efforts by NBN and others to encourage aliyah has had some negative effects, Fass conceded.

At a recent forum at the NBN campus in Jerusalem, principals from schools in communities where English-speakers have congregated “were bemoaning the fact that they have too many Americans in their school [and] it’s super-saturated with Anglos,” he said. “Where you would have had 90 percent of Israelis and 10 percent [English-speakers], it’s the flipside now.”

“You’ll have to start giving Ulpan to Israelis to learn English in some of these schools,” Fass joked.

Regrettably, he said, some principals have sought to deal with the language barrier by segregating the children.

“You can’t [build a cohesive society] if you separate everyone,” Tamano-Shata said.

With olim coming from all over, not just from English-speaking countries, Israel requested that NBN lend its expertise to assist it in its handling of the surge of Ukrainian olim. NBN responded by opening what Fass described as a “one-stop shop” in its Jerusalem campus.

Tamano-Shata told how more than 20 Holocaust survivors arrived from Ukraine on Yom HaShoah.

“Landing in Ben Gurion airport at their age, it’s not easy,” she said, but the Ukranians cried with joy when they saw the IDF soldiers.

“To accept the Holocaust survivors, for me was very exciting and very moving.”

NBN Chairman Tony Gelbart told The Jewish Star that his organization was considering “how we can help olim” beyond those from English-speaking countries.

“We’ve been approached by people in France, and people over the world, asking us ‘can we copy your model,’ and we said you can for sure,” he said, recalling how “it took us 20 years to figure it out.”

New olim from all backgrounds face obstacles acclimating to their new home, and organizaitons like NBN attempt to smooth their way by “fast-tracking people who want to hit the ground running [and by] removing as much bureaucracy as possible,” he said

As for those who choose not to make aliyah, Tamano-Shata said that “we respect the decision of people who want to live in the diaspora.”

Nevertheless, she pledged to “continue with the Zionist movement … to motivate Jewish people around the world to come to Israel in a bad time and also in the good time, in  routine time and also in emergency time.”

Fass said NBN had begun a Zionist education initiative on its campus, “educating gap seminary programs to learn about Zionism.”

“Sadly, a lot of the kids, 18 year olds, go to yeshivot and go to seminaries for their [gap] year, and rarely discuss Zionism,” he said.

“We’re taking them out of the yeshivot, out of their seminaries, and teaching them about Zionism so they can think about what Israel means to them and to tackle certain questions — not to proselytize them, just to pause and think: what does it mean for them to be a Jew who’s living in Israel and learning in Israel.”