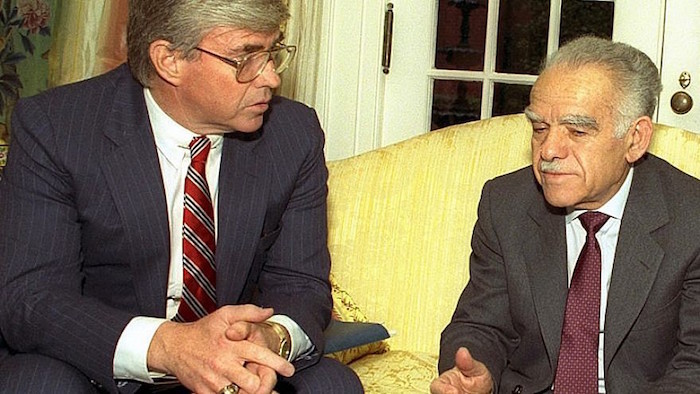 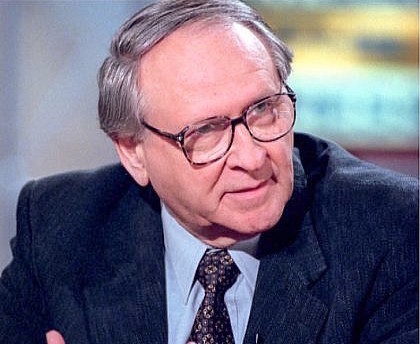 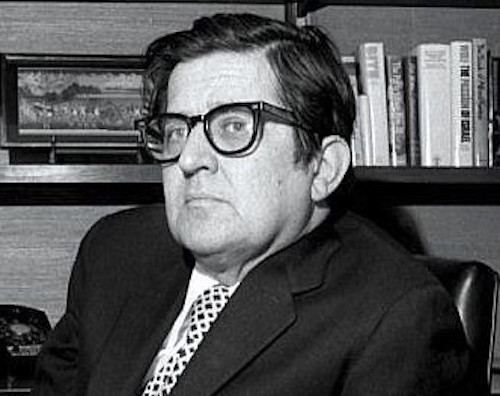 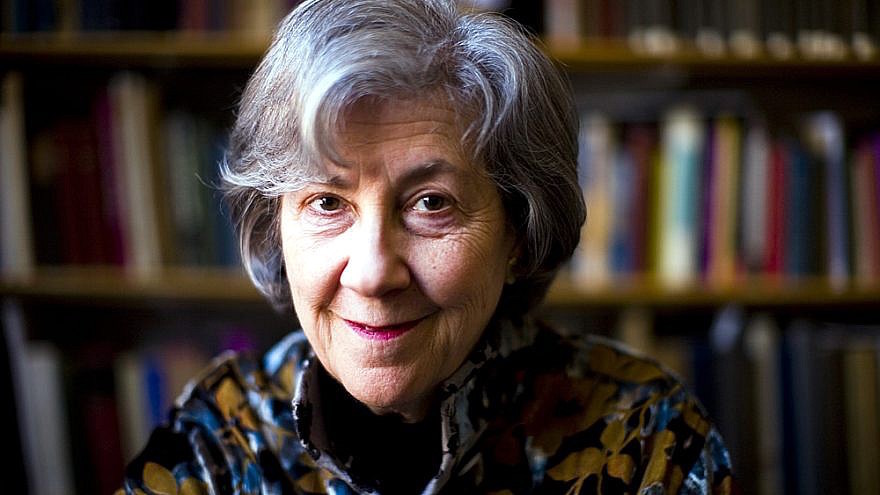 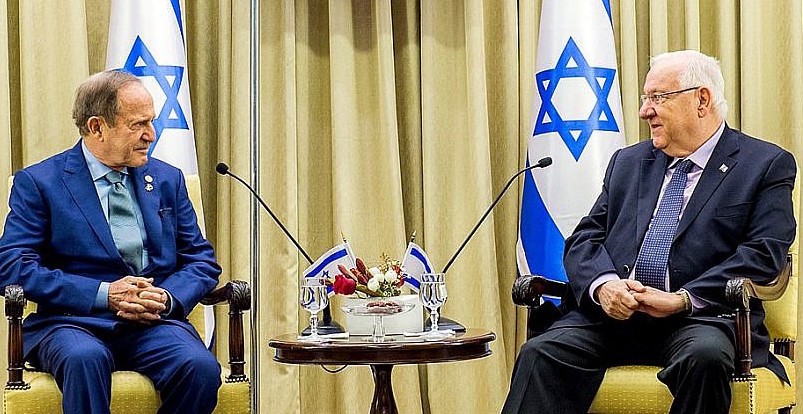 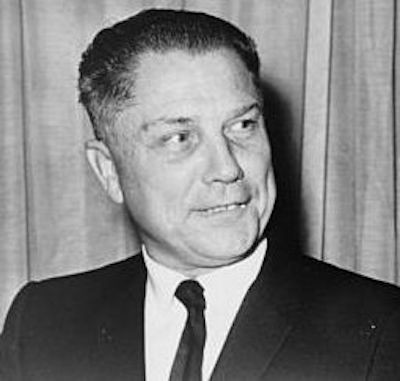 On the occasion of the Jewish state’s 70th anniversary, the Israeli embassy in Washington, in partnership with the Jewish News Syndicate, celebrates 70 of the greatest American contributors to the U.S.-Israel relationship.

Many of the people and organizations chosen for this acknowledgment will be readily recognized by readers of The Jewish Star, others less so, but their powerful stories build a collective history that reflects the broad base of American love and support for the Jewish state.

This week, The Jewish Star publishes the eighth part of a series that will cover all of the “70 who counted.”

When newspaper publisher and real estate magnate Mortimer Zuckerman was accused by academics of using his wealth and power to support Zionism, he responded: “The allegations of this disproportionate influence of the Jewish community remind me of the 92-year-old man sued in a paternity suit. He said he was so proud, he pleaded guilty.”

That mix of brilliance, wit and unabashed devotion to Zionism is characteristic of the Canadian-American billionaire.

Born and raised by an Orthodox family in Montreal, Zuckerman was an intellectual prodigy. Before turning 25, he earned a bachelor’s degree and a law degree from McGill University, an MBA from the Wharton School of the University of Pennsylvania and a master’s in law from Harvard.

He would show equal brilliance in business. In 1970, he co-founded Boston Properties, building the real estate firm into one of the 500 largest companies in the United States.

Zuckerman, now 80, has used his wealth to advance humanitarian causes. A trustee of Memorial Sloan-Kettering Cancer Center and the Dana Farber Cancer Institute, he has contributed millions to cancer research and treatment.

A special focus, though, has been his support for Israel. Among his many contributions was a $100 million gift in 2016 to bring academics to the Jewish state, on a par with the Rhodes scholarship. The gift aims both to break boycotts against the Jewish state and to draw Israeli researchers abroad back home. The money will go to students and faculty at the Technion, the Weizmann Institute of Science, Tel Aviv University and the Hebrew University of Jerusalem, deepening collaboration between the best research institutions in Israel and the United States.

Perhaps even more importantly, in running news sources like The Atlantic, U.S. News & World Report and The New York Daily News, Zuckerman has been a passionate and informed advocate for Israel. He has published hundreds of articles and op-eds that present the facts of Israel’s history, expose the designs of its enemies, and explain the strategic importance of Israel to America.

In addition, he has served as chairman of the Conference of Presidents of Major American Jewish Organizations and as president of the America-Israel Friendship League. Through his philanthropy and outspoken advocacy, Mort Zuckerman has been a great friend of Israel, and a great champion of the U.S.-Israel alliance.

Jimmy Hoffa, the American labor union leader whose 1975 disappearance became the subject of conspiracy theories, grew up in Detroit in the 1920s. At a young age, he began organizing workers, inspiring strikes and walkouts to fight substandard pay and poor working conditions.

In the 1930s, Hoffa rose to prominence in Detroit’s local Teamsters union chapter, which focused on organizing truck drivers and warehouse workers. Hoffa greatly increased the size of the Teamsters and won numerous contracts that led his union to become one of the most powerful in the nation. Eventually becoming president of the Teamsters in 1957, Hoffa wielded influence and power, winning friends while also making fierce enemies.

Hoffa’s record as a controversial union leader is well known, including his time in prison. But what is not widely recognized is his staunch support of Zionism and the establishment of a Jewish state in British Mandate Palestine. Moved by Zionist dedication to the labor movement’ss ideals, Hoffa used the Teamster’s resources to organize gun-running and smuggling efforts to the yishuv throughout the 1940s.

One version of the story has it that weapons and ammo were hidden in the interior of commercial dishwashers. Hoffa, then vice president of the Teamsters, used their trucks to ship the machines to the docks, where they were met by union longshoremen, who loaded some dishwashers onto regular shipments and some onto “special” cargo ships for the Jewish community in Palestine. Upon receipt of the shipment in Palestine, the supplies were diverted to the Jewish underground and reassembled.

In 1955, Hoffa sponsored a charity dinner, raising hundreds of thousands of dollars for a Jerusalem orphanage. Upon visiting Israel to dedicate the orphanage, he was received with a warm welcome by many Israeli leaders, including Golda Meir.

On the question of why Hoffa supported Israel, his son James P. Hoffa, also a supporter of Israel, answers simply that his father’s support was inspired by the Jewish role in building up the American labor movement.

Major labor leaders, such as George Meany and Lane Kirkland, were also significant supporters of Israel. But Jimmy Hoffa’s positive relationship with Israel and Zionism stood out, even among Israel’s numerous friends in the labor movement.

A seven-time all-star football player, Jack Kemp was equally successful in politics. In the course of that second career, he authored one of history’s most influential tax bills, served in George H. W. Bush’s cabinet and was a Republican nominee for vice president.

He was also an extraordinary friend of the Jewish state. Raised in Los Angeles’s Wilshire district, an Orthodox enclave, he attended a mostly Jewish high school. As with his later experiences playing football alongside black teammates, this set him on a lifelong path of appreciation and respect for his peers.

Almost as soon as he was elected to Congress, Kemp helped co-found the Congressional Coalition for Soviet Jewry. It became a passion for him and his wife; they attended countless events to raise awareness. Kemp was a co-sponsor of the Jackson-Vanik Amendment to ensure that Jewish emigration from the Soviet Union actually happened.

Later, in 1991, as U.S. Housing Secretary, he met with Israel’s Housing Minister Ariel Sharon, in deliberate revolt against the wishes of the State Department. It was Kemp’s way of showing the world which side he was on.

As a prominent member of the Republican Party, Kemp made every effort to ensure that the GOP recognized the importance of the Israel-U.S. alliance. He was one of the party’s strongest pro-Israel voices, and his courageous leadership influenced many up-and-coming political figures, including future House Speaker Paul Ryan, that America should always stand with Israel.

Kemp “instinctively knew that Israel stood with America on the frontlines of human freedom,” said his colleague, former Speaker Newt Gingrich. “He was a leader throughout his time in Congress in building the support for Israel that exists to this day.”

The “bleeding-heart conservative,” as Kemp called himself, remained committed to righteousness throughout his life — from combating discrimination and poverty while in Congress to later helping to establish the Foundation for Defense of Democracies.

In championing Israel, Kemp repeatedly explained that Israel was like America when it began: “a city on the hill, a place where it was important to protect, defend and display the light of freedom.”

New York Times is well known for its criticism of Israel, which is what makes the work of A.M. Rosenthal and William Safire stand out.

When A.M. Rosenthal arrived at The New York Times in the 1950s, Jewish reporters were instructed not to use their first names if they were “too Jewish.” Its overseas bureaus deliberately limited the number of Jewish writers, and the paper worried about appearing too partial to Jews. This changed when A.M. Rosenthal became managing editor in 1969, and in his subsequent positions as an executive editor and columnist. A determined truth-teller, Rosenthal was unashamed about his Judaism and unapologetic in his support for Israel.

Born in Canada and raised in a secular family in the Bronx, Rosenthal showed his Jewish consciousness with his first famous article in 1958: “There Is No News from Auschwitz.” The article exposed readers to the horror of a visit to the death camp.

Over the decades, Rosenthal was a lucid and persuasive pro-Israel voice at The New York Times. In 1999, he saw that Yasser Arafat was not committed to peace. Whatever his public pronouncements, Arafat, stated Rosenthal, remained bent on “Israel’s defeat or the desiccation of its national will.” Rosenthal’s support for Israel never ran dry.

His pro-Israel stance helped pave the way for his Pulitzer Prize-winning colleague William Safire, the renowned language and opinion columnist who came to the paper after leaving the Nixon administration in 1973. Possessing a razor-sharp pen, Safire could humble the mightiest for any political or linguistic slip.

Yet he could also defend and praise, and he frequently did so in support of the Jewish state. Indeed, a consistent theme of his columns was the danger that terrorism posed to both America and Israel. On numerous occasions, Safire called on Palestinian leaders to renounce violence and turn to building their society.

Safire enjoyed a decades-long friendship with Ariel Sharon, and in many interviews, allowed Sharon’s opinions on strategic matters to gain a fair hearing. The Safire-Sharon friendship proved especially vital during the Second Intifada (2000-05), when Safire conveyed the grave threat hat Israel faced and the necessity of its self-defense.

These two fixtures at the “Grey Lady” — America’s most prestigious newspaper — consistently made the case that justice was on Israel’s side.

Robert F. Wagner Sr. was one of the greatest of Christian Zionists who supported the creation of the State of Israel.

Born in Prussia, he came to the United States with his family around his eighth birthday. Graduating from law school in his hometown of New York, he was elected to the state legislature from the once heavily German-speaking Yorkville section on the Upper East Side. Though hardly monolithically anti-Jewish, this neighborhood would be a home base of German anti-Semitism, and, later, pro-Nazism, in the United States.

To his credit, Wagner, who became a state senator, lieutenant governor and then U.S. Senator, vehemently opposed it.

Wagner had a nearly unmatched record as a legislator, co-authoring the National Labor Relations Act (called the Wagner Act), helping create Social Security, railroad pensions and many other famous bills. But we should honor as well his determined opposition to Nazism. In 1939, he co-authored the Wagner-Rogers bill to admit German Jewish refugees to the United States. Sadly, while the proposed law called for admitting only an additional 20,000 Jews, it was defeated.

But Wagner was not put off, and in the next year he joined and then became a leader of the organization We Americans of Yorkville, dedicated to opposing and shaming New Yorkers sympathetic to Nazism.

Support for the creation of Israel would become a focus of Wagner’s in the last few years of his life. Consequently, he also co-authored the Taft-Wagner Resolution. Passing both the House and Senate in December 1945, it affirmed U.S. support for a Jewish state and put pressure on U.S. President Harry S. Truman to back that commitment.

Wagner also pressed Truman not to support the Morrison-Grady plan for Palestine. This scheme would have given the Jewish section of Palestine a territory of just 1,500 square miles, limited Jewish emigration to Palestine to 100,000 displaced persons and placed all of Palestine under what would ultimately be British control. Opposition to this plan was vital to the future of Israel.

Sen. Wagner would continue to show his determined support for the newly established State of Israel right up until his death.