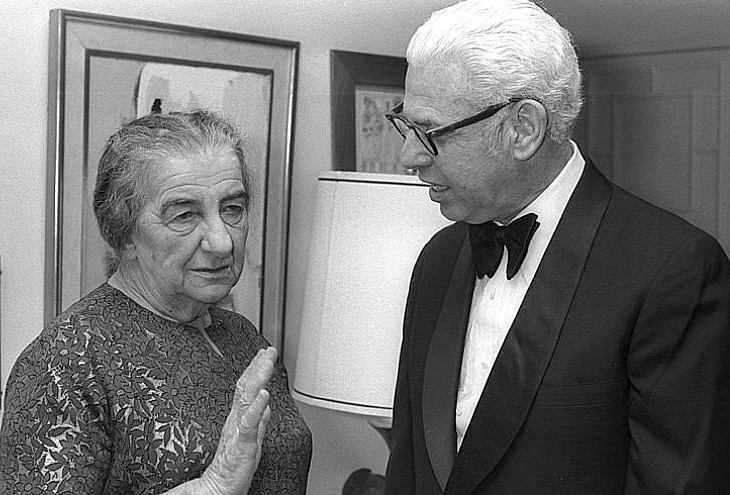 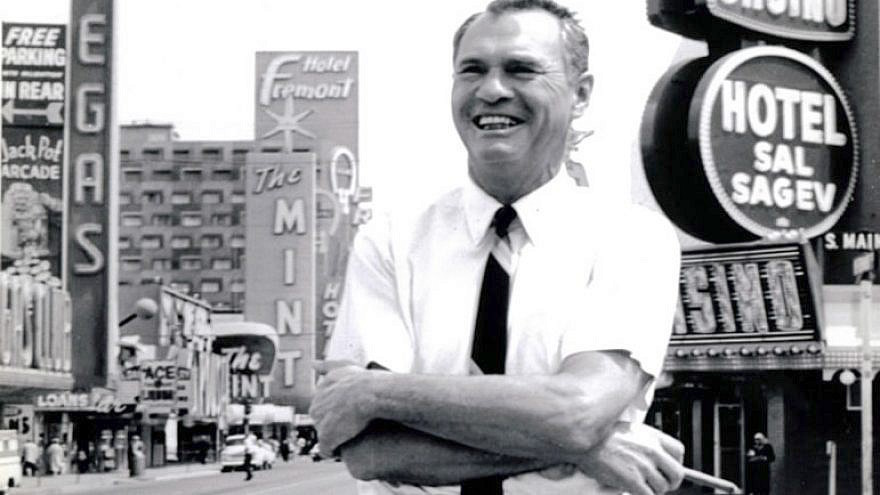 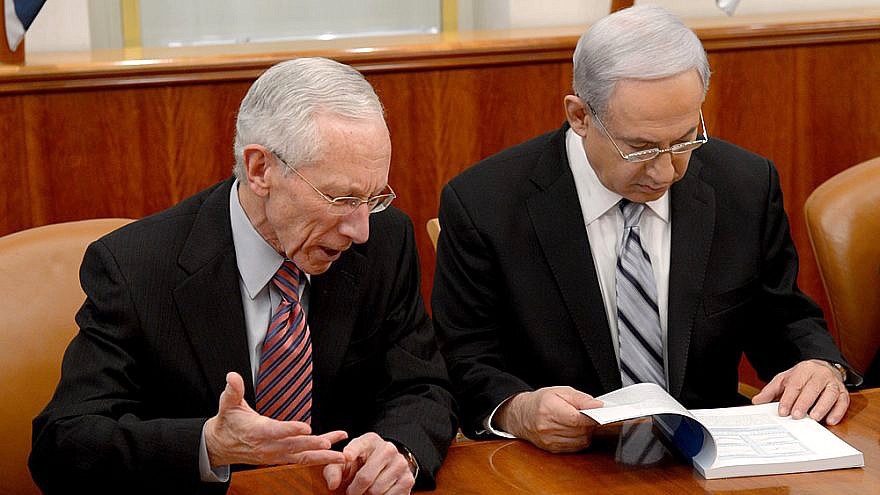 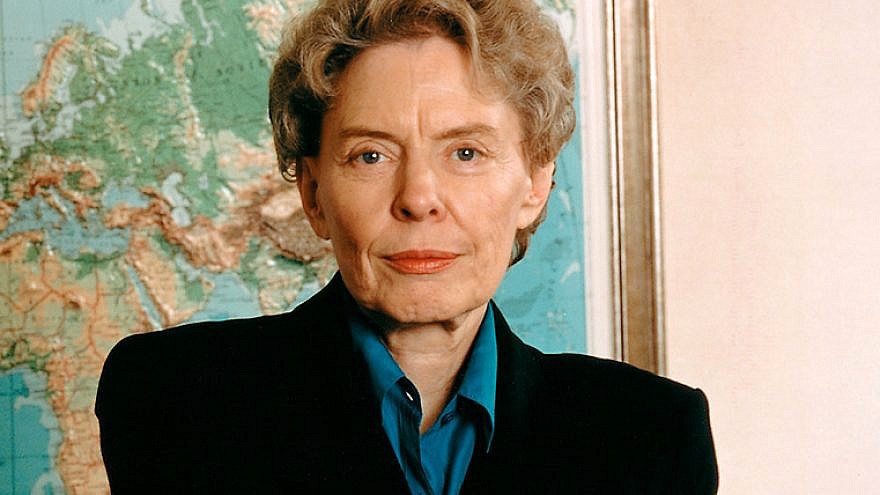 Diplomat Jeane Kirkpatrick.
Wikimedia Commons
Previous Next
By the Israel Embassy in Washington

On the occasion of the Jewish state’s 70th anniversary, the Israeli embassy in Washington celebrates 70 of the greatest American contributors to the U.S.-Israel relationship.

Many of the people and organizations chosen will be readily recognized by readers of The Jewish Star, others less so, but their stories build a collective history that reflects the broad base of American love and support for the Jewish state.

This week, The Jewish Star publishes the seventh part of a series on “70 who counted.”

Stanley Fischer has held many important academic, business and policy-making positions at the World Bank, the International Monetary Fund and Citicorp. From 2014 to 2017, he served as vice chair of the U.S. Federal Reserve System. But from 2005 to 2013, Fischer was governor of the Bank of Israel, and therein lies a story.

Born and raised in Rhodesia (today Zimbabwe), Fischer was a passionate Zionist by his bar mitzvah. In 1985, with Israel’s economy in crisis, Fischer joined his friends and frequent coauthors Michael Bruno and Rüdiger Dornbusch in crafting a plan that drastically cut Israel’s deficit and used wage and price controls to stabilize its currency. It was a bold move, whose implementation is regarded by some as the beginning of Israeli capitalism.

An article about Jeane Kirkpatrick called her Israel’s “Champion at the U.N.,” an apt description for Reagan’s first U.N. ambassador and the first American woman to hold that office.

Born in Oklahoma and raised in Southern Illinois, Kirkpatrick had firm faith in American principles. Among her first meetings at the United States Mission to the United Nations was with Israeli Ambassador Yehuda Blum. Appalled by the condescension with which the Holocaust survivor was treated by her aides, Kirkpatrick ordered them out of the room, promising Blum that “no one will be treated better in this mission than Israel.”

Kirkpatrick kept her promise. She defended the Jewish state, never hesitating to condemn what she called “the obsessive vilification of Israel” at the United Nations, and forcefully upheld Israel’s right to defend itself. She once observed that U.N. diplomacy regarding Israel and the Arab states “has nothing to do with peace, but is quite simply a continuation of war against Israel by other means.”

After her passing, political leaders on both sides of the partisan divide praised her unrelenting commitment to morality. For America and Israel, Jean Kirkpatrick was an Iron Lady of truth and moral clarity at the United Nations.

Daniel Inouye was the first Japanese-American elected to the House, and the first to preside in the Senate. He was a staggeringly brave man, serving as a medical volunteer when Pearl Harbor was attacked. In 1943, when the U.S. allowed men of Japanese ancestry to serve in the military, Inouye promptly signed up. He distinguished himself, eventually winning the Congressional Medal of Honor.

Leading a unit in France, Inouye was shot in the chest; he survived because some lucky coins blocked a bullet. In Italy, just as he pulled the pin from a grenade, he was struck by an enemy grenade, which lopped off much of his right arm. He used his left hand to pry the lit grenade from his nearly severed right hand and lob it at the Germans, destroying the gun nest. Later, his right arm had to be fully amputated.

While recovering, Inouye heard about the Shoah horrors from a veteran who had been among the liberators of a death camp. Thereafter, he felt a kinship with the Jewish people. He made money to pay for his education by selling Israel bonds, and more than once said that he had considered converting to Judaism.

As the longtime head of the Senate Appropriations Committee, Inouye had great power. Over and over, he used it to help Israel. Israeli Ambassador Sallai Meridor noted that Inouye “led the American support for the development of multi-layered Israeli initiated missile defense system, from Arrow, through David’s Sling, to Iron Dome.” Honoring his invaluable contribution, Israel named a defense missile facility after him, marking the first time that the country has named a military facility after a non-Israeli.

Inouye also sponsored legislation calling the United States to recognize Jerusalem as Israel’s capital. And he was pointed in giving credit to Israel, knowledgeably remarking that “Israel’s contribution to U.S. military intelligence is greater than all NATO countries combined.”

Herman “Hank” Greenspun, born in Brooklyn in 1909, initially followed a common path for young Jews at the time. A son of immigrants, he earned a law degree in 1934 and joined a well-known New York law firm upon graduation. After enlisting in the U.S. army in 1941, he was decorated for his bravery in combat.

After the war, Greenspun moved to Las Vegas, beginning a number of publishing ventures and serving as a publicity agent for the Flamingo Hotel, run by Jewish gangster “Bugsy” Siegel. After Siegel’s murder in 1947, Greenspun quit to focus on newspapers. He wrote major muckraking articles on public figures of the day, such as the virulently anti-Communist Sen. Joe McCarthy.

In 1947, war loomed over the horizon for alestine. As bloodthirsty Arab rhetoric escalated, many American Jews feared a second Holocaust.

Determined to aid in the war effort, Greenspun devised an elaborate and illegal scheme to ship weapons to the military wing of the yishuv, which would become the IDF after statehood. He would buy parts for machine guns and airplanes in Hawaii, and ship them to Israel via Mexico.

He was fearless: once, upon testing a potential explosive for the Haganah, the device failed to detonate. Greenspun volunteered to inspect the bomb by hand.

Greenspun was eventually caught by the FBI and put on trial in Los Angeles for smuggling, in violation of the Neutrality Act. He was found guilty and fined the significant sum of $10,000, but avoided prison time. He called his conviction one of the proudest moments of his life and said that he was honored to have been able to contribute to the founding of Israel. He was pardoned by President John F. Kennedy in 1961.

Upon his death in Las Vegas in 1989, Israeli leaders celebrated Greenspun as a hero. It is not an exaggeration to say that without him, the War of Independence may not have been won.

In many ways, the life of Arthur Goldberg exemplifies the American Jewish experience. Born in Chicago in 1908 to poor Jewish immigrants from Russia, Goldberg graduated at the top of his law school class at Northwestern and became a prominent labor attorney. He was a central figure in shaping the post-war labor agreement landscape, and was a staunch advocate for free speech and workers’ freedom of assembly.

In 1961, Kennedy named him Secretary of Labor. Less than two years later, with the retirement of Felix Frankfurter, Kennedy appointed Goldberg to the “Jewish seat” of the U.S. Supreme Court. This position was also short-lived; in 1965, Lyndon Johnson persuaded Goldberg to take the position of Ambassador to the U.N.

Goldberg, an outspoken Zionist, served at a tense time for the U.S.-Israel relationship: during the 1967 Six-Day War. Goldberg negotiated a successful cease-fire between Israel and its Arab neighbors, and a few months later, co-drafted the groundbreaking Resolution 242, a cornerstone of the Israeli-Arab peace process. It outlined the dual principles of Israel’s need to withdraw from territory gained during the war along with the need for Arab recognition of Israel’s sovereignty and right to live in peace. Understanding the Israeli position that pre-1967 borders were indefensible. Goldberg left ambiguity as to which territory Israel would have to vacate for peace.

According to Goldberg, this was intentional, representing the United States’ position that prioritized Israel’s right to a secure border, which may preclude withdrawing from all territories.

In cementing this position in the resolution, Goldberg helped establish a status quo of American support for Israeli security that has continued for decades.

Ileana Ros-Lehtinen’s maternal grandparents were Sephardim, who fled Ottoman persecution to the relative safety of Cuba. At the age of 8, she and her family left Cuba, fleeing Castro’s oppressive regime. A practicing Episcopalian, Ros-Lehtinen remains proud of her Jewish heritage.

Ros-Lehtinen was the first Hispanic woman and first Cuban-American elected to the House of Representatives. Throughout her tenure representing Florida, she has been a tireless advocate for the Jewish people and state, authoring legislation that bolstered the bilateral relationship between the U.S. and Israel and protecting the national security and interests of both nations.

In 2006, she spearheaded the law to block U.S. aid to the Hamas-controlled Palestinian Authority until it denounced violence. She is a powerful voice in Congress condemning Iran’s aggression and, through multiple bills, has advocated for increasing sanctions.

Regarding the U.N. and its affiliates, Ros-Lehtinen has been a staunch defender of Israel, pressing for reform of the international body.

When she retires from Congress this year, Ros-Lehtinen will leave behind a 30-year legacy of defending freedom and defending Israel. This lioness in the House will be sorely missed.

Born in 1901 to Jewish immigrants from Romania, “Mickey” Marcus grew up on the Lower East Side, studied at West Point, served as an assistant U.S. attorney, and led the NYC Department of Corrections.

His experiences in World War II war convinced him of the need for a Jewish state. Parachuting into Normandy on D-Day, accompanying delegations to wartime conferences, and helping to rehabilitate millions of displaced persons, Marcus stared Nazi atrocities in the face.

Meanwhile, as the Jewish struggle in Palestine intensified, David Ben-Gurion realized that the Haganah, which had become skilled at guerilla operations, was unprepared for conflict against regular armies. He sent emissaries to America to find officers willing to train future soldiers of the soon-to-be Jewish state, Marcus agreed to help. He was given the title Aluf, making him Israel’s first general, and perhaps the first general of a Jewish army in almost 2,000 years.

Marcus’s frankness and humor meshed well with the Haganah, and he effectively managed and united fighting forces under a single organizational structure. He helped develop a field manual, mostly based on his memorization of the U.S. Army’s, and identified critical weak points in the Jewish army’s defenses and logistics.

During the 1948 War of Independence, Marcus helped organize and command critical operations such as the building of the famous Burma Road, an alternative route to Jerusalem. Tragically, he was killed near the end of the war by a guard who mistook him for an enemy soldier.

David Ben-Gurion summed up what so many felt: “He was the best man we had.”