Israel is not a colonial enterprise. Here’s why 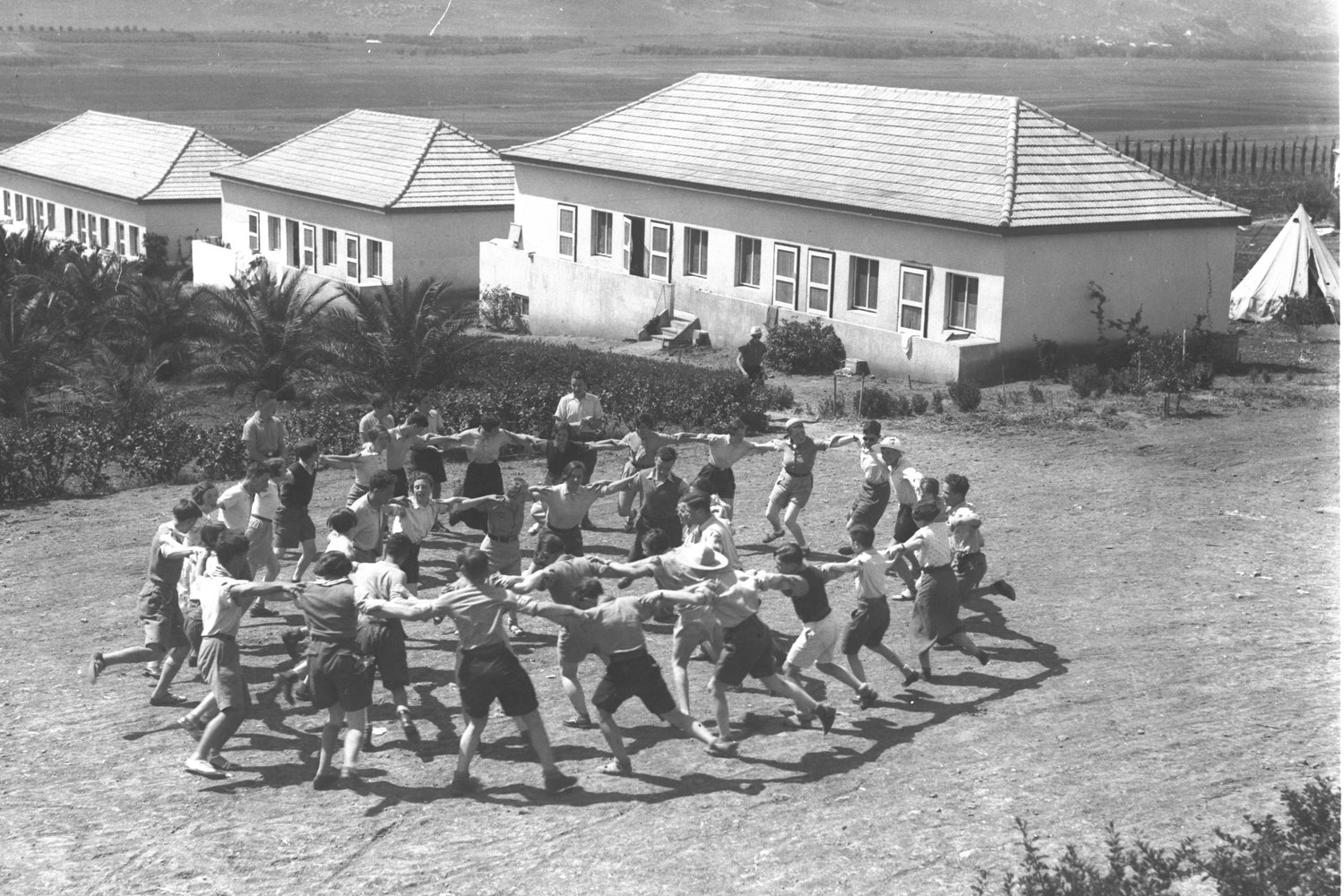 Youth who made Aliyah from Germany dance the hora at Kiubbutz tin Harod in 1936.

Zionists were determined to prevent their society from developing along the lines of colonial exploitation.”
Commentary by Uzay Bulut

Black Lives Matter and other anti-Israel, far-left “activists” have often accused Israel of being a “colonialist” state or pursuing “settler colonial pursuits.”

The 2001 article, “Forgetting Europe: Perspectives on the debate about Zionism and colonialism” by Professor Avi Bareli, is an important read that could help them better understand the issue.

First, one should fully understand that the primary goal of colonialism was an “aggregate of material phenomena — geographical, economic, political and social — and its focus was chiefly economic,” writes Bareli, who teaches at the Institute for the Study of Israel and Zionism of the Ben-Gurion University of the Negev.

As colonialism was basically a material phenomenon, the economic context of Zionism — defined as the right of Jews to self-determination in their ancient homeland — should be investigated. Bareli explains:

“The Jewish settlement in Palestine transferred capital in an opposite direction to that of colonization projects: it invested Jewish capital in Palestine and did not withdraw natural resources and capital from it to benefit an empire or enrich investors (whether investors in the home country or among the colonists themselves).

“That is, it was not an effort to gain riches for some imperial state or an enterprise conducted by settlers in pursuit of wealth. For a long time — and perhaps still today — it was actually an unprofitable project. It certainly was not a promising arena for individuals or groups who aspired to get rich.

“It is hard to point to any economic logic that motivated the Jewish migration to and settlement in Palestine, which was a poor country and almost totally devoid of natural resources.”

Hence, the movement of the Jews to British Mandate Palestine, and then Israel, cannot be explained in primarily economic terms. What has happened in Israel is thus very different from what happened in regions taken over and controlled by colonialists.

There are many factors that the far-left fails to discuss in its analysis of Zionism as an alleged “colonialist project,” such as the “European” character of the Jews, the social fissure that divided British Mandate Palestine into two national sectors and the significance of the revival by Jews of the Hebrew language.

Bareli explains: “The Jews’ foreignness in Europe involved an Oriental and Semitic element, which was one of the causes for the emergence of anti-Semitism. … Some of the old communities of European Jewry had existed there for centuries, yet their members had never managed to shake off their alien status on that continent.”

The revival of the Hebrew language — an Oriental language and one of the “Semitic” cultural traits of the Jews of Europe — by Zionists or Jews is another element that is antithetical to colonization. “By reviving the Hebrew language,” notes Bareilly, “the Jewish immigrants adopted a cultural element native to the region in which they settled.”

And in many cases, the movement of Jews from Europe to the Land of Israel was not a result of voluntary immigration “since the Jews were in effect expelled from Europe in a long, painful and complex process that reached its horrible nadir in the mid-20th century,” explains Bareli.

BLM also fails to pay attention to the social fissure in British Mandate Palestine (officially in Hebrew Eretz Yisrael, the “Land of Israel”) and its division into two largely discrete national sectors. Bareli notes that several leading Israeli academics have contributed to establishing the thesis that, under the British Mandate (1918-48), the society and economy of Palestine/Eretz Israel developed as two more or less separate national sectors.

“Moshe Lissak argues that colonial exploitation in the relations between the Zionist settlers and the Palestinian Arabs at the end of the Ottoman era and the start of the British Mandate was never realized because the Zionist socialists — the main Zionist group in the country — were determined to prevent their society from developing along the lines of colonial exploitation [and so advanced the] development of Jewish autonomy under British patronage [and] the gradual separation of the economies of the two national groups, and the circumstances of the national conflict from the 1920s onwards.”

The economy and society in British Mandate Palestine/Israel were thus divided into separate national sectors, and it was this separation that prevented the development of a society based on the exploitation of the Palestinian Arabs.

Following this sectoral-national division came proposals for a political partition into two states. Jews accepted the offer to share the Palestine Mandate with the Arabs. Arab residents, however, rejected several opportunities presented to them to declare a state, including the UN General Assembly partition plan of 1947. And on the day Israel declared its independence — May 14, 1948 — it was promptly invaded by five Arab countries.

Bareli explains that the Jewish acceptance of the political partition of the British Mandate Palestine demonstrates that they rejected both “exploitation” and “dispossession” of Palestinian Arabs. He notes:

“Twice, in 1937 and in 1947, Jews agreed in principle to proposals of a political partition into two states; in 1946-47 they even made substantial diplomatic efforts on behalf of partition — that is, on behalf of living side by side, not one on top of the other (exploitation), and not one in place of the other (dispossession).”

However, because the Arabs rejected these offers and attempted to expel the Jews from the land, a war broke out in 1947. Bareli further explains what really happened in 1947 and 1948:

“The war broke out because the Palestinian Arabs rejected the principle of living side by side, even though it had been endorsed by the United Nations General Assembly and sought to expel the Jewish immigrants from the country.

“When the Arabs’ attempts to expel them were frustrated, at the end of the war, the Jews were no longer willing to return to the demographic and geographic conditions that had exposed them to mortal peril in late 1947.”

Those associated with the Black Lives Matter movement and other far-left dogmatists fail to understand and explain the causes of the return of the Jewish people to their ancient land; the development by the Jewish people of a modern national movement; and the Jewish emigration, investment and settlement in Israel.

They also fail to discuss what really brought Holocaust refugees and immigrants from Europe, as well as those from Middle Eastern and North African countries, to Israel and united them there. And the reason for this failure is, as Bareli notes, that the goal of the “Colonialist School” attempting to call Israel “a colonialist entity” is not an understanding of the historical processes, but a puritanical judgment that frustrates such understanding.

Referring to Zionism as a “colonialist” movement and Israel as a “settler-colonialist” entity by failing to understand the causes and roots of Zionism has become a misleading but quite popular trend in the West.

To critically and properly discuss this mistaken analysis, one should keep in mind the intellectual and methodological deficiencies of the ideologues who call Zionism a “colonialist” movement. As Bareli puts it, “Obliterating the causes of any object of study distorts it to the extent of replacing it with an imaginary one.”

However, those who hold the false view that Zionism is colonialist do not entertain even the slightest interest in understanding the basics of Zionism.

Uzay Bulut is a Turkish journalist and political analyst formerly based in Ankara. She is currently a research student at the MA Woodman-Scheller Israel Studies International Program of the Ben-Gurion University in Israel.