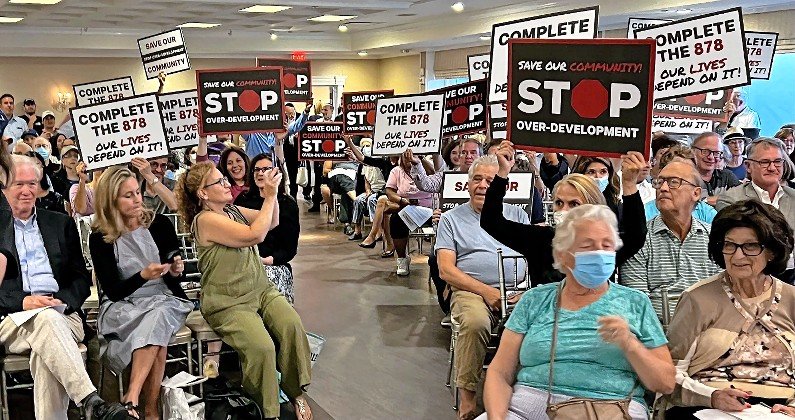 An estimated 500 people turned out Tuesday night to a meeting in Lawrence to voice their displeasure with over-development in the Five Towns area.
The Jewish Star / Ed Weintrob
By Ed Weintrob, The Jewish Star

Five Towners upset with over-development in the area turned out for a civic meeting and rally Tuesday night at the Lawrence Yacht and Country Club. Organizers said more than 500 people showed up.

Paris Popack, Judy Bernstien and Jennifer Wallace, who helped organize the event, outlined the several projects which residents feel threaten the area with a dangerous level of overdevelopment. Lack of action on route 878 — stalled for 60 years — exacerbates the problem, they said.

Nassau County Legislator Howard J. Kopel explained that zoning issues are complicated and may not be fixable once developers have invested, but said he would join community members in their fight.

“I wish I had the power to make this go away,” he said.

Rochelle Stern Kevelson, past president of the Lawrence Association and a resident for 55 years, opened the public comment period by placing her community “between the devil and the deep blue sea.”

“Rockaway Turnpike is our devil,” she said. “We cannot get out of this community in case of an emergency.”