Bibi and the generals

How Blue and White views the Palestinians 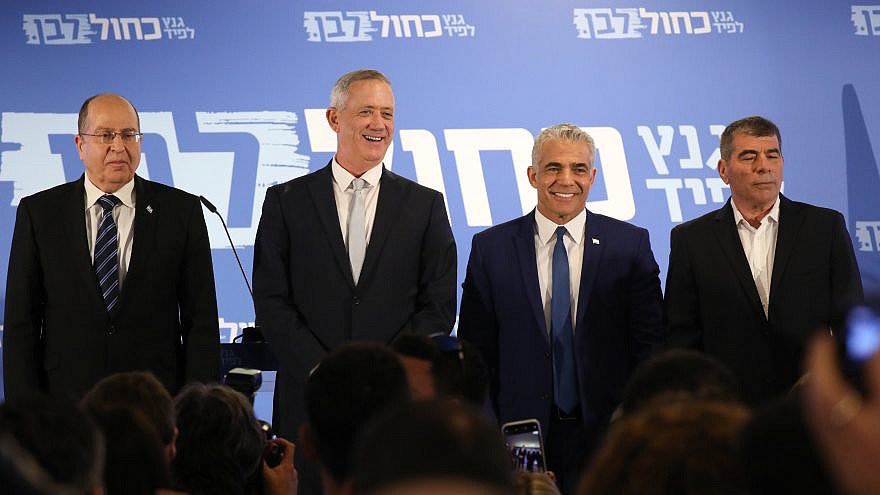 According to polls, the Blue and White Party is the largest in Israel at this time. Three of its four senior members are former chief of staffs of the Israel Defense Forces. Led by former IDF Chief of Staff Benny Gantz, other senior members are retired lieutenant generals Gabi Ashkenazi and Moshe Ya’alon, the latter also serving as Israel’s defense minister until his resignation in 2016. Former Finance Minister Yair Lapid is the only civilian in the party’s leadership.

This heavy representation of ex-generals, who collectively have vast experience in dealing with Israel’s array of security challenges, raises the question of how their past is shaping their current political outlooks, particularly regarding the Palestinian question and other key issues.

‘It’s time for a bottom-up approach’

Ya’alon’s position on the Palestinians is detailed, and he has taken opportunities to share it.

For example, in 2017, Ya’alon published an op-ed in Foreign Affairs magazine titled How to Build Middle East Peace. In it, he rejects the traditional Oslo model of land-for-peace as failed.

He also rules out the idea of large-scale annexation of West Bank territory, which he argued would imperil the critical goal of preserving Israel’s Jewish and democratic character.

In between the two positions of land-for-peace and annexation, Ya’alon stakes out his own long-term, “bottom-up” solution, which is based on two components. The first is political separation between Israelis and Palestinians; the second is a series of economic boosts to the Palestinian economy until circumstances make real peace possible in the distant future.

“Like many Israelis, I believed in the idea that territorial concessions might be the key to achieving peace. But over time, I became disillusioned,” Ya’alon wrote in his op-ed. He recalled how, as military intelligence chief, he delivered a strategic warning to the late Prime Minister Yitzhak Rabin in 1995, stating the late Palestinian leader Yasser Arafat was “feeding his people a steady diet of hatred and vitriol toward Israel,” and that “the PLO leadership was planning to maintain the conflict against Israel regardless of Arafat’s signature on the White House lawn.”

“Regrettably, more than two decades later, my assessment has not changed,” wrote Ya’alon, adding that “the vitriol from Gaza — what I call ‘Hamastan’ — is even worse.”

Ya’alon also rejects the idea that Israeli settlements are the problem. “The persistence of the Arab-Jewish conflict for more than 150 years is not because Jews have settled in a particular part of the land of Israel, but because Arabs have rejected the Jewish right to settle anywhere in the land of Israel.”

“There should be a desalination facility built in Gaza, and the agricultural sector should be promoted across the territories. And the success of Rawabi, the new planned city, should be replicated in other regions of the West Bank.”

‘We must set borders for Israel’

Ashkenazi, who served as chief of staff between 2007 and 2011, oversaw one of the IDF’s most important recent phases, dubbed a “return to basics.” It was based on the idea that the ground forces be highly trained, and prepared for war at any time, rather than Israel relying mainly on airpower and long-range firepower.

Ashkenazi’s policy is seen by many defense analysts as a key rehabilitation stage of the army.

Publicly, his comments on Palestinians have been vague and limited. Last month, Israel’s Channel 13 news quoted him as stating, “We must set borders for Israel with an emphasis on the Jordan Valley being in our hands.”

“I’m always asked if I am in favor of one state or two, and I always answer: I’m in favor of the State of Israel,” he said, according to the report.

He also reportedly said that “only half of the public gets drafted [for military service], and this is a dangerous situation,” a reference to the fact that just 50 percent of Israelis end up in the IDF (the result of Arab Israeli exemptions, and Israeli Jews who cite religious commitments as a reason to avoid the draft). His observation could be seen as a warning that if the situation does not change, an increasing amount of military duties will fall on a decreasing proportion of the population that answers the call for service.

‘We will shape new reality’

Benny Gantz’s own outlook regarding the conflict with the Palestinians has begun to become clearer in light of his growing yet still limited public statements on the issue. His policy seems to be based on the idea of trying to restart negotiations with the Palestinian Authority, though he appears skeptical that talks will bear fruit. If diplomacy fails, Gantz has hinted heavily that he would favor unilateral steps.

Prior to officially launching his bid for the premiership, Gantz was quoted in December by Channel 13 as telling a gathering of Mexican Jews that Israel’s “No. 1 interest is to find a solution [to the conflict with the Palestinians]. This is not just a political question of left and right.”

Gantz recounted a meeting with an unnamed Middle Eastern leader, who told him that there are 14 million people living between the Mediterranean and the Jordan River — Jews and Palestinians. “None of them are going anywhere, and we have to find a way to live together,” the leader said. “I could not agree more,” he added.

“I believe that for us Israelis, it is important to find a solution without compromising our security needs and the safety of our citizens.”

This suggests that Gantz finds the status quo unacceptable. During his inaugural address in January as the head of a new political party, Gantz vowed that any government he would lead “will strive for peace and will not miss any opportunity to create a regional change. This is what the Israeli patriot Menachem Begin did, who signed a peace treaty with Egypt. This is what the Israeli patriot Yitzhak Rabin did, who forged a peace treaty with Jordan. This is what Benjamin Netanyahu — yes, he too, is an Israeli patriot — did, when he delivered the Bar-Ilan speech [committing himself to a two-state solution] and signed the Hebron evacuation agreement at Wye with the arch-murderer Yasser Arafat.”

But Gantz also indicated that if efforts at diplomacy with the Palestinian Authority fail once again, he will turn to unilateral steps, saying, “if we learn that there is no way to reach peace at this time, we will shape a new reality.”

He called for strengthening settlement blocs and the Golan Heights, which he said “we will never withdraw from.” He also emphasized that Jerusalem must remain Israel’s united capital.

And like Ashkenazi, Gantz said “the Jordan Valley will remain our eastern security border.”

During his term as chief of staff, Gantz commanded a 2012 air operation including an airstrike on Hamas’s chief of staff, Ahmed Jabari. He referred to that event when delivering a warning to Israel’s enemies. While Israel should “allow all humanitarian assistance to Gazan citizens” and help Gaza’s economic development, at the same time, he said, “The heads of terror organizations should know that Ahmed Jabari was not the first, and he does not have to be the last.”