World-defying Friedman and Trump again call it like it is 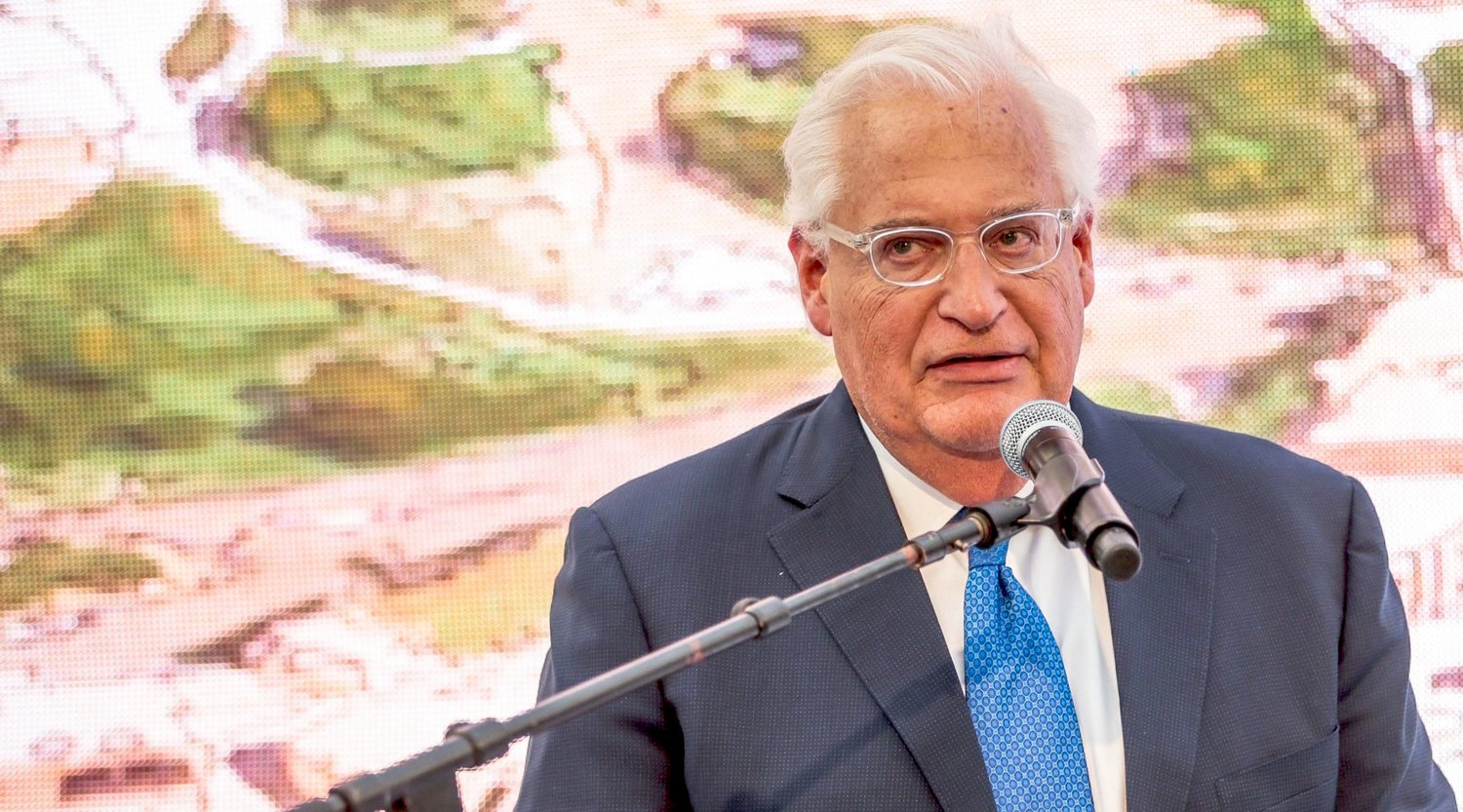 U.S. Ambassador to Israel David Friedman at the opening of Pilgrimage Road at the City of David archaeological site in the eastern Jerusalem neighborhood of Silwan on June 30.
Flash90
By Jonathan S. Tobin

The critics are right about U.S. Ambassador to Israel David Friedman’s presence at the ceremonial opening of Jerusalem’s Pilgrimage Road being unprecedented. None of his predecessors would have been caught dead at a Jewish site on the wrong side of the Green Line. Up until last year, the United States had stubbornly refused to recognize that any part of the ancient capital of the Jews belonged to the Jewish state.

Friedman, accompanied by U.S. Middle East envoy Jason Greenblatt, swung a sledgehammer to break through a symbolic wall and complete the opening of the biblical Pilgrimage Road. Smashing the wall was not — as critics of President Donald Trump and Friedman contend — a symbol of their destruction of the already dead-in-the-water peace process. Rather, it was yet another reaffirmation of the administration’s correct determination to emphasize the absurdity of the Palestinians’ willingness to go on denying Jewish history.

The Pilgrimage Road is a project created by the El Ad Association that operates the City of David National Park in association with the Israel Antiquities Authority and the Nature and Parks Authority. Archeologists working at the site first uncovered evidence of the city that was King David’s capital of biblical Israel. The “road” is a tunnel that has been dug underneath a present-day Jerusalem neighborhood that permits scholars and visitors to trod the path taken by ancient Jewish pilgrims. Thousands of years ago, Jews would walk from the Pool of Siloam at the City of David and then ascend to the Temple Mount above to worship. Those who walk through the excavated tunnel now will emerge several hundred yards from its entrance to a point near the Western Wall inside the Old City.

Since the international community normally considers the preservation of ancient heritage sites a good thing, an observer might wonder why the opening of the tunnel has provoked so much fuss and criticism.

The answer is that the international community regards anything that reminds them of the deep roots that both Judaism and Jewish peoplehood have in the soil of Jerusalem with dismay. The City of David is located in the part of the city that was held illegally by Jordan from 1949 to 1967. That means they consider it “occupied territory” in which the Palestinians and their foreign cheerleaders can claim that any Jewish presence is illegal, even if means delegitimizing a historic site that has provided abundant proof of the historical biblical kingdom of Israel.

Therefore, any Israeli activity in the area, which encompasses the Arab neighborhood of Silwan, has been viewed as an illegal settlement, in addition to an impediment to plans aimed at partitioning the city and making it the capital of a putative Palestinian state. But their main complaint is that the archeological park is part of an effort to “Judaize Jerusalem.”

The notion that Jerusalem — the city that has been integral to Jewish national identity, history and faith for 3,000 years — can be “Judaized” is absurd. But it fits in with the claims of both the Palestinian Authority and their Hamas rivals that the ancient temple, the Davidic kingdom and the whole history of the city is fiction rather than fact.

To buttress their complaints about the excavations, critics of the project point to the fact that some Palestinians have been inconvenienced by the construction that has gone on underneath their homes. They have our sympathy, but the same can be said of anyone who lives in proximity to building projects in cities all over the world. Their real beef is not about cracks developing in walls but that the history the archeologists have unearthed undermines efforts to portray Jews as foreign colonists in their ancient capital.

Trump’s critics say that Friedman and Greenblatt’s presence constituted U.S. recognition of Israeli sovereignty over all of Jerusalem. They say this prejudices peace negotiations in which the Palestinians would hope to be given parts of Jerusalem or at least it would if the P.A. were ever willing to return to peace talks and demonstrate any willingness to recognize the legitimacy of a Jewish state no matter where its borders were drawn.

But the problem with that argument is that as long as the United States was willing to pretend — as it was from 1949 to 2017 — that Jerusalem wasn’t Israel’s capital or that it had no legitimate claim to sites such as the City of David, it only reinforced Palestinian intransigence. The United States has always needed to make it clear to the Palestinians that, at a bare minimum, they couldn’t expect Israel to give up parts of Jerusalem that are as integral to Jewish heritage. Yet this is what Trump’s predecessors failed to do, and as a result, it has continued to fuel the Palestinians’ unwillingness to recognize that their century-old war on Zionism had failed.

Friedman wasn’t wrong when he noted not only that Israel was as likely to give up this heritage site as the United States would be to surrender the Statue of Liberty; still, the key point about the opening of the site was the uncovering of truth. Without an acknowledgement on the part of the Palestinians of the truth about the Jewish history that they continue to lie about, true peace is impossible.

Instead of complaining about the unveiling of these sites, the Palestinians and their allies should acknowledge the facts about Jewish Jerusalem and stop hoping for a fantasy in which the Jewish state will no longer exist. Trump, Friedman and Greenblatt are merely sending them a reminder to give up those delusions — something their predecessors didn’t do nearly enough. Those who claim to wish the Palestinians well should be doing the same thing.