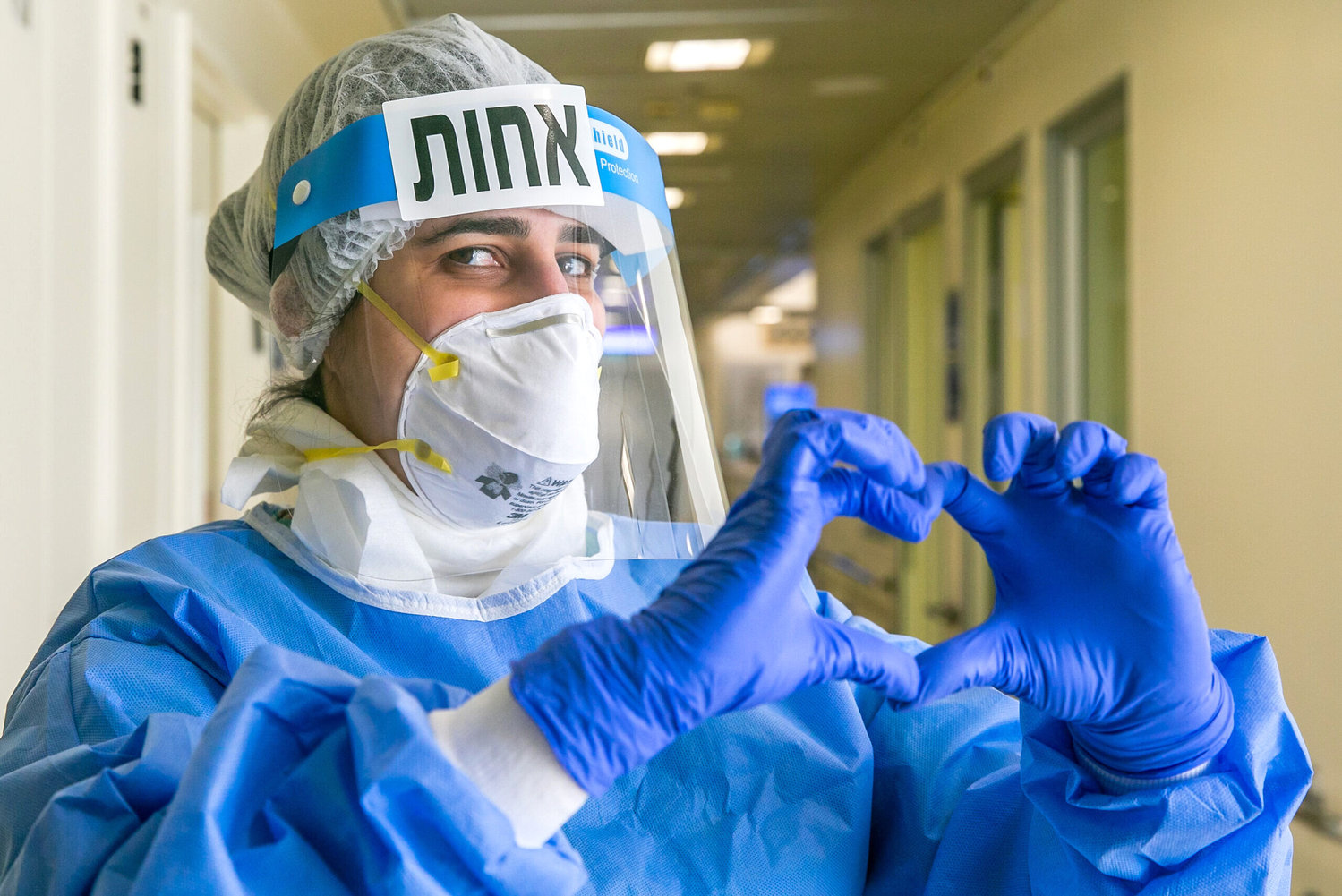 A member of the medical team in the coronavirus unit at Tel Aviv Sourasky Medical Center, Ichilov Hospital in Tel Aviv on May 4.
Yossi Aloni/Flash90
By Melanie Phillips

While countries around the world struggle to get on top of the COVID-19 crisis, Israel’s achievement so far has been remarkable. Its mortality rate from the virus has been vastly smaller, in proportion to its population, than the rate in countries such as Britain, Sweden or the United States. That’s largely because it tackled the virus with the kind of bold, strategic approach with which it defends itself against its physical foes.

This week, with new cases reduced to a few dozen, it started to lift a wide range of restrictions on public activity. Many are fearful, however, that the country’s exit from lockdown is too fast and incoherent, and may send the infection rate soaring again out of control.

That said, Israel’s defense against this invisible enemy has also highlighted something positive that previously wasn’t fully appreciated. Thousands of Israeli Arab health-care professionals have been putting their own lives on the line by treating virus patients alongside their Jewish colleagues.

There could scarcely have been a more graphic demonstration of equality and indispensability, and it will have been noticed by Israel’s Jews and Arabs alike. It vividly illustrated the prominence of Israeli Arabs in the country’s health system, in which they make up 17 percent of its doctors, 24 percent of its nurses and 48 percent of its pharmacists.

This may have profound political consequences in a society where the status of Israeli Arabs, who form some 20 percent of the population, is a sensitive source of mutual suspicion, exaggeration and denial.

Israel’s stellar experience so far with the coronavirus may have a global impact, too. Earlier this week, the country’s prime minister, Benjamin Netanyahu, pledged a donation of $60 million at an international conference raising funds to fight the virus around the world.

Boasting of Israel’s cutting-edge expertise in science, research and innovation, he declared: “We hope to work with other countries to leverage our unique capabilities to find solutions for the benefit of all.”

In making this pitch, Netanyahu was also attempting to “leverage” Israel’s record in fighting the virus in order to diminish global hostility to Israel. The hope that such achievements will transmute anti-Israel hostility into friendship may be stretching optimism too far.

True, there was a “flying pig” moment when the United Nations actually praised Israel, along with the Palestinian Arabs, over their “unprecedented co-operation on efforts aimed at containing the epidemic.”

An estimated 40,000 laborers from the disputed territories have been granted permits to stay in Israel until the end of Ramadan. The Coordinator of Government Activities in the Territories (COGAT) has given them safe transit from their homes into their workplaces across the Green Line. Israeli employers are responsible for providing these workers with accommodation, as well as with protective masks and gloves. The Israeli authorities will even provide them with health insurance.

Such cooperation is even taking place in Hamas-run Gaza, the source of never-ending murderous attacks on Israel. Not only does COGAT facilitate international-aid deliveries there, such as testing equipment, protective garments, disinfectant, medical stocks and other humanitarian supplies. In addition, dozens of Gazan doctors, nurses and other medical workers have been trained by Israeli teams to treat patients infected with COVID-19.

Richard Kemp, Britain’s former commanding officer in Afghanistan and now a tireless advocate for Israel, has observed the unprecedented extent of such cooperation with Israeli Arabs, too.

In their villages, he writes, Israel Defense Forces’ uniforms are often seen among locals as provocative. In such places identified by Israel’s health ministry as virus hotspots, however, deployment of Muslim IDF soldiers and careful communications with village leaders have so far helped prevent untoward incidents.

In some cases, Muslim civilians carrying out official roles have even donned fluorescent vests with IDF Home Front Command markings, which Kemp observes is “something normally unheard of and indicative of understanding the need to pull together.”

The IDF have also distributed more than 100,000 food packages to Israeli Arabs in places where there have been significant virus outbreaks. And across Israel, hotels have been turned into isolation facilities tailor-made for discrete communities, such as Muslims or Orthodox Jews. In Jerusalem, for example, one hotel has been turned into a halal quarantine center for Muslim residents returning from abroad.

Despite all this, there’s scant sign of any softening among those who customarily give Israel a kicking. Eleven European ambassadors to Israel, including those from the United Kingdom, Germany, France and the European Union, have threatened Israel with severe consequences if it goes ahead with annexing parts of the “West Bank.”

Once again, they have parroted the tendentious claim that such a move would be a violation of international law. In Britain, nearly 130 parliamentarians have written to Prime Minister Boris Johnson, urging him to impose economic sanctions if Israel annexes these territories. So no change there.

Israel has also furiously rebuked the European Union for telling the Palestinians that links to a terrorist organization do not automatically preclude participation in an E.U.-funded program.

And, of course, the sniping continues from the usual anti-Israel media suspects. The Washington Post demanded recently that Israel “lift the siege on Gaza” to ensure that “Palestinian doctors and nurses have the resources they need to ensure the health and safety of their patients.”

As ever, it mindlessly parrots the propaganda without even bothering to look at the facts. So no change there.

As for the Palestinian Arabs themselves, their leaders continue to defame Israel with malice and blood libels even while it helps save Palestinian lives.

The Palestinian Authority prime minister, Mohammad Shtayyeh, has claimed that some Israeli soldiers are “trying to spread the virus through the door handles of cars,” while official P.A. publications claim that Israel is trying to contaminate Palestinian prisoners.

Meanwhile in Gaza last month, Hamas-run security forces arrested several peace activists on treason charges after they took part in a two-hour Zoom online meeting with Israeli activists to discuss issues of common interest, including the virus. The Hamas-run Interior Ministry accused them of “holding a normalization activity with the Israeli occupation.”

In a sign that some good can come out of bad, it seems that this pandemic is prompting encouraging moves by ordinary Israeli and Palestinian Arabs towards co-existence with Israeli Jews.

However, given the deep irrationality of Israel-hatred both in the West, and in the Arab and Muslim world, it will take more than Israel saving countless Arab and other lives from this plague to shift it.

Melanie Phillips is a British journalist, broadcaster and author.