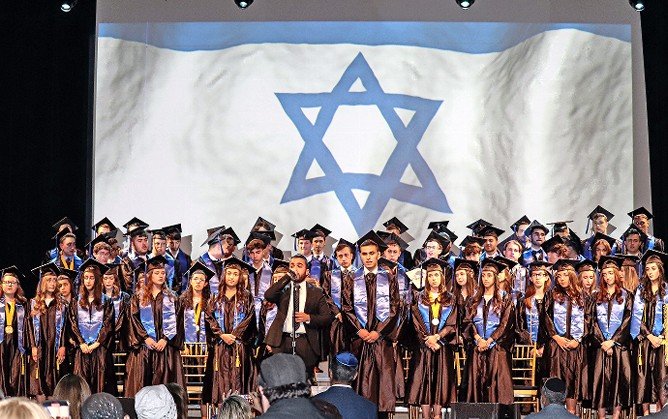 The Class of 2021 of the Hebrew Academy of Nassau County High School.

HANC HS celebrated its 47th Commencement at The Space in Westbury on June 14.

The program, which was also livestreamed, opened with a parody video featuring administrators, teachers, and students reflecting on memorable events with the graduates.

After the National Anthem and Hatikvah were sung by Dylan Homapour (’15),  graduates Ravid Levy and Kayla Landau were recognized as they will be joining the IDF next year, and Justin Rapp was applauded for enlisting in the US Marines.

Associate Principal Marie Palaia reminded students to strive for excellence, find balance in life, and laugh and smile each day.

In her valedictory address, Rena Max encouraged her classmates to continue making positive choices based on the foundations each student received while at HANC.

Graduates and members of the school band, Jordan Reinstein and Elana Weiss, starred in a music video accompanied by music teacher Jacob Spadaro. HANC President Ruchi Kushner congratulated the class on their resiliency and accomplishments especially during challenging times.

In his charge to the graduates, Rabbi Slomnicki spoke about conformity versus rebellion and finding balance in their new stage of life. He imparted that the equation to success is to synthesize the values learned at HANC as bnei and bnot Torah.

Before closing out the ceremony, Dylan Homapour (’15) was invited back to the stage to perform a moving rendition of Birchat Habonim.

As they received their diplomas, the graduates were greeted by Dean of Students Avi Smus, and Director of Student Life Rabbi Daniel Mezei, as well as Rabbi Slomnicki, Mrs.Palaia, and Ms. Zucker. Graduates received a gift from the Parent Council and female graduates received an additional book gifted by Paula and Neil Moldovan in memory of Ruth and Philip Hendel.

HANC HS puts its vals and sals in the spotlight

Counting the omer at HANC ECC