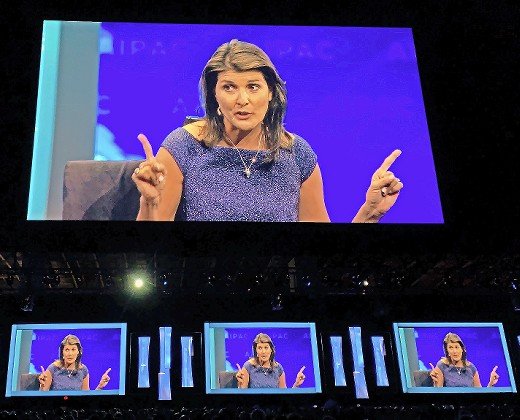 Nikki Haley at the AIPAC policy conference in Washington in 2019.
Ed Weintrob, The Jewish Star
By David Isaac, JNS

Former US Ambassador to the UN Nikki Haley sharply criticized the Biden administration for its failure to confront the Iranian regime.

Speaking to media at the sixth annual conference of United Against Iran (UANI), Haley lamented the Biden administration’s continued efforts to revive the Joint Comprehensive Plan of Action (JCPOA), or 2015 Iran deal.

Haley was one of the key officials in the Trump administration who urged then-President Donald Trump to exit the JCPOA. She traveled to Vienna to visit the International Atomic Energy Agency (IAEA) in 2017, which was monitoring Iran’s nuclear program.

“Let me ask them the questions about the deal. And let me come back and make the case for why you should get out of the deal,” she told Trump.

When she visited the IAEA, she asked if they inspected universities, where nuclear research took place, or military installations. The IAEA said it inspected neither.

“So I said, ‘OK, what is it exactly that you inspect?’ ” They told her that they inspect a site if there’s suspicious activity after giving the Iranians 90 days’ warning.

“You can clear out a warehouse in 90 days, no problem. That’s when I came back, and I told President Trump, ‘We have to get out of the Iran deal’,” Haley said.

Trump abandoned the deal in May 2018.

Haley deplored the White House’s decision to issue a visa to let Iranian President Ebrahim Raisi into the US to address the UN General Assembly given Iran’s continued “bad behavior,” including calls of “Death to America,” ongoing violations of UN resolutions, and missile strikes against military bases housing US soldiers.

Haley spoke of the Sept. 16 death of Mahsa Amini, 22, beaten to death by Iran’s “morality police” for the incorrect wearing of a hijab, a Muslim head covering. Amini’s death has sparked widespread protests throughout Iran in which at least nine have been killed by the authorities.

Haley said that instead of letting Iran’s president deliver a speech at the UN, the US should be publicizing the stories of the anti-regime protesters. “The protests we’re seeing from the Iranian people are heroic. We need to get their stories out. They don’t want a regime that treats them like this.”

Referring to Raisi’s insistence at the UN that Iran wasn’t seeking a nuclear bomb and its nuclear program was “peaceful,” Haley said, “When in Iran’s history, have we ever seen them do anything in the name of peace? They don’t. So it’s time for everyone to stop being naïve.”

The Biden team, made up of many Obama administration holdovers, “can’t accept that they got it wrong. … They look at it as a political win, instead of looking at it as a national security risk that we’ve got to get right for the American people,” she said.

“You can’t stop a corrupt regime from being corrupt. You can’t stop a terrorist regime, the number one state sponsor of terror, from wanting to destroy anyone that comes in its way who doesn’t agree with it. You can’t change that culture,” she said.

In the weeks leading up to the General Assembly, Haley took to media channels to warn against letting Raisi into the country, particularly in light of Iran’s attempted assassinations of high-level American officials, including John Bolton, former national security advisor in the Trump administration.

US officials say Bolton was likely targeted in retaliation for the killing of Islamic Revolutionary Guards Commander Qassem Soleimani in January 2020.