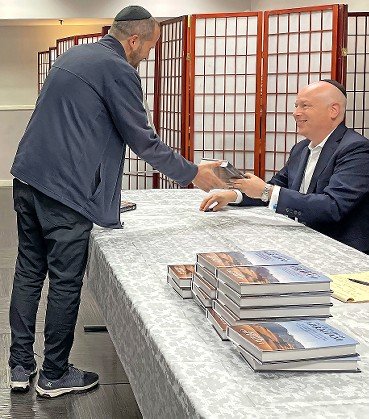 Jason Greenblatt autographs his book, “In the Path of Abraham,” at the Young Israel of North Woodmere.
Jeffrey Bessen 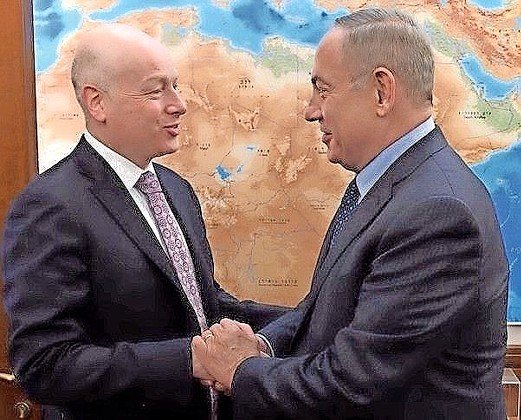 Jason Greenblatt, addressing an enthusiastic audience at the Young Israel of North Woodmere on Sept. 7, said he is an optimist, a realist and a pessimist about what the future portends for the Middle East.

“I look to the future, not the past,” Greenblatt said, adding that “(I) hope for peace but you deal with the cards you are dealt.”

Greenblatt, as White House envoy to the Middle East, was a key member of the team — along with former President Donald Trump’s son-in-law Jared Kushner — that negotiated the Abraham Accords in 2020.

Greenblatt’s visit to the Five Towns was his first local appearance since the release of his book, “In the Path of Abraham.”

He related his personal experiences and fielded a wide range of questions. The Middle East was changing while elsewhere the world remains stuck in neutral, he said.

In response to a query on whether Hamas and the Palestine Liberation Organization are essentially the same, Greenblatt said he was disappointed that the US “could not get the United Nations to call Hamas what they are,” a terrorist organization.

A lawyer who is a native of Queens, Greenblatt, 55, worked for the Trump Organization beginning in 1997. He became an executive vice president and chief legal officer to Trump and Trump’s businesses, as well as an adviser on Israel and the Middle East.

When introducing Greenblatt, Rabbi Yehuda Septimus said though he had just met the guest speaker, “I feel a deep kinship to him,” noting that they attended the same yeshiva, both went to Yeshiva University and attained post-graduate degrees at New York University. Where their paths diverge, Septimus humorously said, is that he only intervenes in arguments between his teenage daughters, while Greenblatt is negotiating peace in the Middle East.

It is the human connection that Greenblatt said he aims for through his speaking engagements.

“The countries are moving in a different direction in terms of their society; weaning themselves off oil, they all have big plans,” he said.

“Those plans likely include Israel in some way, and I think we need to pay attention to that.”

Kushner had an impact, Greenblatt said, explaining that “I thought he was a great friend, a great boss, a great colleague. He’s quiet, he’s studious and he has the most optimistic approach to a problem I’ve ever seen.”

After a difficult session, Greenblatt said Kushner functioned as a cheerleader and challenged the group to keep at it and find another direction, akin to solving a maze. Kushner’s optimism continues to coarse through Greenblatt.

“I think the Middle East is on an upswing in lots a ways,” said Greenblatt, whose book tour has taken him to Los Angeles, Florida and just before the High Holy days, South Korea.

“Despite Covid, despite the world challenges today, it’s a very promising place to be and we should pay attention to it.”