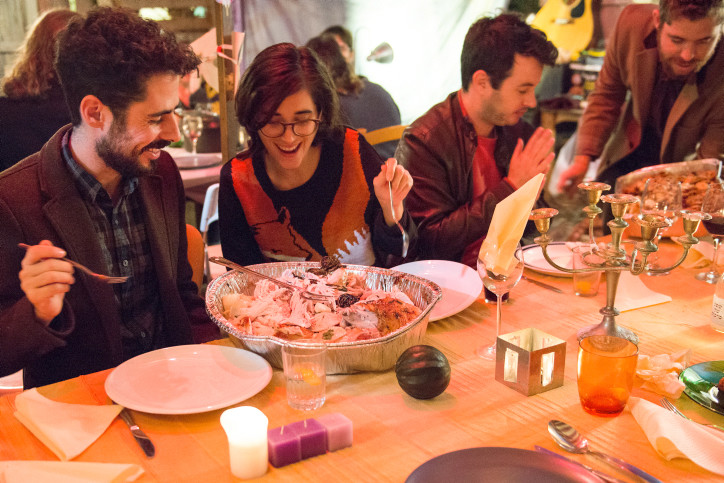 Thousands of modern-day Pilgrims have thrown the journey into reverse, leaving North American shores behind and crossing the ocean to begin life anew in the old-new country of Israel. But one thing the roughly 300,000 “native Americans” who’ve made aliyah in the last seven decades have in common with the Pilgrims of yore is the attitude of gratitude — the sense of feeling truly thankful.

And yet, even though the vast majority of them are happy in their new home, many of these American-born olim insist on celebrating a holiday that most of their sabra neighbors have never heard of: Thanksgiving.

“When we made aliyah 14 years ago, I told my husband” I would never give up Thanksgiving, says Wisconsin native Hilary Faverman. “And I haven’t.”

So determined was she to do Turkey Day right that she imported a big American oven, she revealed, “just for this one day.”

Unlike in the United States — where every grocery store is stocked with deep inventories of turkey, cranberries and every kind of piecrust imaginable — each November, Faverman wrestles with the butcher near her Beitar-area home to order her a bird big enough to serve 30 guests. She also relies on friends to scout round for the other necessities. One summer (six months before Turkey Day), she got a call from a friend in Ra’anana.

“She was excited to tell me she’d just found some cans of pumpkin. Of course, I asked her to pick them up for me.”

But these days, Faverman knows at least the cranberries are in the bag; her mom makes a habit of throwing fresh ones into her suitcase when traveling from the United States for the holiday.

Noa Choritz of Efrat is another committed Thanksgiving hostess. Since making aliyah from Pittsburgh in 2002, each year she “scours the area” to make sure hers is as authentic a holiday as possible. Only in Israel: Sitting in a restaurant in Jerusalem, she overheard an American teenager’s phone conversation with his parents. “He was telling them what he needed them to bring with them, so I asked him, ‘Could you ask your parents to add a can of pumpkin-pie filling?’ And they did.”

Choritz also covered her bases by posting on a website frequented by Anglos and got a response from a woman who had a couple cans of pumpkin lying around. Though Choritz thought she was covered, it turned out that the woman’s canned pumpkin had expired three years earlier, and the teen’s parents’ cans had no hechsher.

“We just ended up using the expired ones,” she says.

Thanksgiving-loving Israelis are invited to savor some of the flavor of the holiday thanks to the Association of Americans and Canadians in Israel (AACI). Since its founding in the 1950s, AACI has marked the holiday. This year’s celebration: “Throwback Thanksgiving” featuring an oldies band, and traditional pumpkin and apple pies.

“Since Americans, unlike so many others, make aliyah by choice and not to escape hard times, as much as they love it here, they have a lot of feel-good nostalgia for their old home,” says AACI program manager Miriam Barth. “Some even bring their kids and grandkids, who don’t have that same connection with American culture.”

But truth be told, unlike Faverman and Choritz, most American expats pay little attention to Turkey Day.

“The first year we did do it,” recalls Nancy Milgram, originally from Randolph, NJ. “But that was 30 years ago. You just absorb Israel’s cultural cycle, and we have so many holidays here that you don’t really miss it.”

Still, there is the lingering taste of her mom’s candied sweet potatoes back in the Bronx and the family stories of her great-grandfather, Moshe Fuchs, who, escaping poverty and persecution in Austria-Hungary, immigrated to America in 1895.

“He was a learned, traditional Orthodox Jew, so he’d have nothing to do with Christmas, of course, but every year, he insisted the family celebrate Thanksgiving,” says Milgram. “He always said we Jews have so much to be thankful to America for. It’s true that it’s the one holiday when all Americans eat the same basic feast and watch the same Macy’s Thanksgiving Day Parade on TV.”

That one day of national unity is something Israelis experience year-round, adds Milgram.

“It’s great living in a country where our Jewish holidays are the national holidays — no need to take time to observe our holy days,” she says. “It’s wonderful to be completely part of the national culture.”

The only piece of Thanksgiving Scott Pizor says he expects to miss is quite frankly the pie … well, along with the turkey and stuffing.

“It really is the best meal of the year, and all those amazing leftovers!” says the 28-year-old basketball player from Texas, who this summer made aliyah with Nefesh B’Nefesh to Eilat, where he’s playing for the Hapoel Hevel Elot team. “But shawarma and schnitzel, they’re pretty good, too, and I’ve never felt so welcome as I do here.”

For that sense of welcome, it comes back to feeling thankful — a recurring theme with many Israeli pilgrims. As the Faverman family of six returned from a recent visit to the States, “this was the first time I wasn’t jealous of the big houses and the big yards,” says Hilary. “I realize that it’s only here in Israel where our family truly fits, where we have a community that’s like family. Thanksgiving is a real opportunity to remind ourselves of how thankful we are to be here.”

So long after they’ve sworn off turkey leftovers for the foreseeable future, it’s the ex-pats’ attitude of gratitude that lingers. New olah Nechama Cheses, a grandmother from Newton, Mass., says, just two months after making aliyah with her husband Aryeh, she’s thankful for everything from “the friendly guy at the local makolet to my sabra neighbor who took me around to show me the good shopping and practice my Hebrew, to the lady in the bank who gives recommendations for good kosher restaurants, to Yossi across the street who already has a shidduch for our son.”

And Cheses says there’s something else she’s thankful for.

“These last two months have been a celebration of living Jewishly in the moment,” she says, “of starting a new chapter in life and feeling our place in making new history in this holy land.”