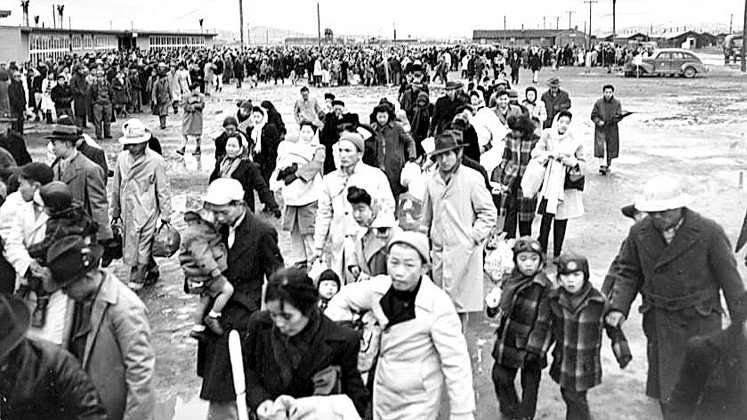 To FDR, the presence in America of both Jews and Japanese Americans, by virtue of their ‘blood,’ threatened harm to the country.”
By Rafael Medoff

This week marks the 80th anniversary of President Franklin D. Roosevelt’s fateful decision to round up more than 130,000 Japanese-Americans and hold them in detention camps, on the grounds that they might be spies for Japan.

What does FDR’s mass internment of the Japanese have to do with his response to the Holocaust? More than you might think.

President Roosevelt’s Executive Order 9066, issued on Feb. 19, 1942, authorized the War Department to designate parts of the country “military areas,” from which “alien enemies” would be “excluded.” All individuals of Japanese ancestry were considered potential “enemies” simply because of their ethnic background.

Roosevelt explained his view of Asians in a series of articles in the 1920s, shortly before he was elected governor of New York. Writing in Asia magazine in 1923, he sympathized with what he said was the widespread view “that the mingling of white with oriental blood on an extensive scale is harmful to our future citizenship.”

Two years later, in an article for the Macon (Georgia) Daily Telegraph (for which he was a regular columnist), FDR asserted: “Anyone who has traveled in the Far East knows that the mingling of Asiatic blood with European or American blood produces, in nine cases out of ten, the most unfortunate results.” The future president warned that “Japanese immigrants are not capable of assimilation into the American population.”

Following the 1941 Japanese attack on Pearl Harbor, some of President Roosevelt’s military advisers began pushing for mass detention of Japanese Americans on the grounds that, as Secretary of War Stimson put it, “their racial characteristics are such that we cannot understand or trust [them].” FDR’s belief that “Japanese immigrants are not capable of assimilation” contributed to his willingness to take such a radical step.

Roosevelt’s perspective also helps explain why he authorized the roundup of Japanese Americans, yet never contemplated similar action against German Americans or Italian Americans, although they, too, had family ties to countries which America was fighting in the war.

“Orientals” were not the only ethnic group whom FDR viewed with automatic suspicion. He harbored similar sentiments concerning Jews. There are more than a dozen documented instances in which Roosevelt made unflattering statements about Jews in private conversations with friends or political allies in the 1930s and 1940s.

His remarks about Jews focused on several specific themes: that Jews possessed certain innate and distasteful characteristics; that it was undesirable to have too many Jews in any single profession, institution, or geographic locale and that America should be an overwhelmingly white and Protestant country.

Thus President Roosevelt accused the publishers of the New York Times of using “a dirty Jewish trick” to resolve a tax problem. He told Rabbi Stephen S. Wise, America’s foremost Jewish leader, that Jews in Poland were to blame for provoking anti-Semitism because they dominated the Polish economy. In a conversation with Sen. Burton Wheeler (D-Mass.), Roosevelt expressed pride that “there is no Jewish blood in our veins.”

In one 1941 cabinet meeting, FDR remarked that there were too many Jews among federal employees in Oregon. He also boasted that when he was on Harvard University’s Board of Overseers in the 1920s, he had helped bring about a quota to limit the admission of Jewish students. In 1943, he privately asserted that German hostility toward Jews was “understandable” because (he erroneously claimed) “over fifty percent of the lawyers, doctors, school teachers, college professors, etc, in Germany, were Jews.”

Most relevant to the issue of the Japanese internment was what Roosevelt said about Jews to Winston Churchill during a White House luncheon on May 22, 1943.

According to the diary of Vice President Henry Wallace, FDR approvingly described a plan drafted by one of his advisers, which “essentially [was] to spread the Jews thin all over the world. The president said he had tried this out in [Meriwether] County, and at Hyde Park on the basis of adding four or five Jewish families at each place. He claimed that the local population would have no objection if there were no more than that.”

FDR’s plan for the Jews was remarkably similar to what he envisioned for Japanese Americans. At a Nov. 21, 1944, press conference, the president explained what would happen to the detainees after leaving the internment camps:

“A good deal of progress has been made in scattering them through the country … whether it’s in the Hudson River Valley or in western Georgia which we all know, in one of those countries, probably half a dozen or a dozen families could be scattered around on the farms and worked into the community. … And they wouldn’t — what’s my favorite word? — discombobulate the existing population of those particular countries very much.”

This was the common theme that underlay Roosevelt’s perceptions of both Jews and Japanese Americans. Their “blood” — that is, their innate racial characteristics — made them suspect. If admitted to the United States in large numbers, they would overcrowd certain professions, dominate aspects of society, or harm America’s character or culture in other ways.

They needed to be “spread out thin” so as to keep them in check. The entry of significant numbers of “non-assimilable” Jewish or Asian immigrants did not fit comfortably in that vision.

That explains why the Roosevelt administration suppressed Jewish refugee immigration far below the levels allowed by the existing quota system.

Some 190,000 quota places from Germany and Axis-occupied countries went unused from 1933 to 1945. Yet the president turned away the refugee ship St. Louis with its 930 Jewish passengers and refused to support a bill to admit 20,000 refugee children from Germany. Taking in any significant number of Jewish refugees — even though permitted by the existing quota laws — did not comport with Franklin Roosevelt’s conception of the ideal America.

For Japanese Americans, that meant losing almost all their possessions and being shipped off to detention camps for years. For Jews trying to flee from Europe, it meant America slamming shut its doors just at the moment when they most desperately needed shelter.